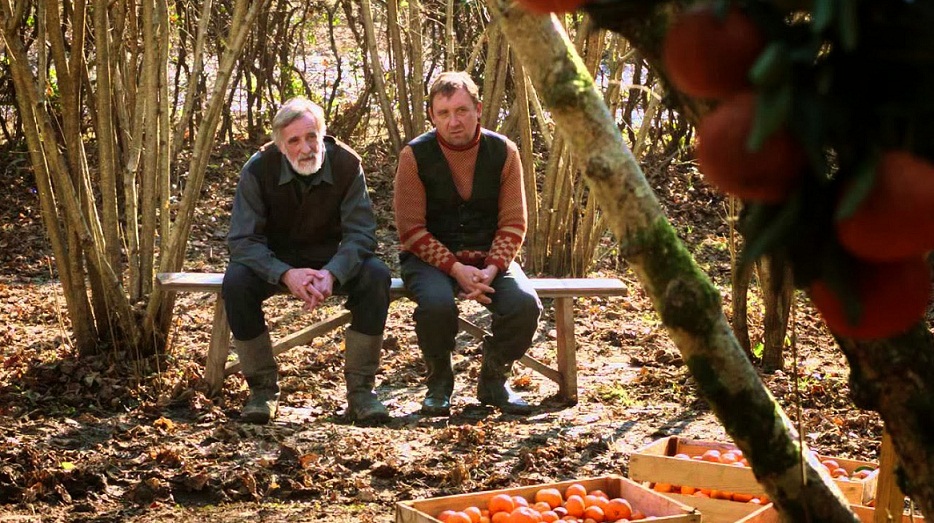 To talk, let alone write, about films like Tangerines is difficult. The trouble comes from inability to pinpoint exactly what was so amazing, because all elements of the film are simple by themselves and the quality seems to stem from something in-between, rather than the frames themselves. This is one of those films, which you describe to your friends as a “must see” and abstain from giving arguments to explain why.

For me, seeing a poster of Tangerines outside of a local Tallinn shopping centre Solaris was enough to know that not only I want to see this film, but that it will also be an unforgettable experience. For others – hearing the main theme might be enough. And for those, who are still not convinced or want to read more, the following paragraphs are here exactly for that.

The film opens up with a beautifully shot scene of a carpenter Ivo (starred by a famous Estonian actor Lembit Ulfsak, who has been continually working in both theatre and film industry for over 40 years) crafting crates for tangerines in his simple workshop. Just like Ivo, the Georgian director and scriptwriter Zaza Urushadze isn’t pretentious either. He knows his craft well and instead of attempting to make something ground-breaking, he directs in an honest way, focusing on simple things.

Written in only two weeks and filmed in a bit more than one month, Tangerines is exactly that: unsophisticated, yet effective techniques completely dedicated to the service of the story. Almost nothing is taken too far in this film and yet nothing is lacking.

It’s 1992 and Georgian – Abkhazian conflict has just broken out. Small Estonian villages in Abkhazia, where Estonians lived for more than a century, were abandoned as the exiled citizens took the offer to repatriate. The stupidity and animosities of the warfare are portrayed by focusing on an individual tragedy. The film introduces us to two Estonians who stayed behind and are now trying to continue their unpretentious lives in the midst of an armed conflict: the carpenter Ivo and an owner of a tangerine orchard – Margus, who is starred by another famous Estonian, a theatre director Elmo Nüganen. Both of these characters are working hard to harvest the tangerines in time. “Not because of the money”, as Margus puts it, “but because it’s such a beautiful crop”.

Life is just as beautiful and just as cheap as tangerines in the times of war. Ivo and Margus are trying to save not only the crop, but also the value of life, driven by the belief that people should remain humane to others, in spite of all the differences. This ideology is brought to a practical test as the deadly shootout ensues right next to the orchard. The Estonians manage to save two fighters from different sides of the conflict – Ahmed (Giorgi Nakashidze) and Nika (Misha Meskhi). Both of them are gravely wounded and both of them are bent on killing each other.

As their health improves under the vigilant care of Ivo, so does their attitude towards each other. Hatred is slowly replaced by attempts of understanding one another, slowly leading both characters and viewers to recognise the stupidity of war. The development is acted well and is interesting to watch, but regrettably, more is revealed by characters talking about themselves, than by their actions. The acting department also suffers from a feeling that character consistency is sometimes sacrificed in order to generate a laugh from the audience.

However, this isn’t a major shortcoming, as the director seems to know well how very thin the line between laughter and cry is. He utilizes this knowledge well, making dramatic situations happen moments after funny ones, thus intensifying the effect and constantly keeping grip on the audience and its feelings. This impact is supported by an amazing soundtrack. While it consists of only three songs and the main theme is repeated often, it doesn’t feel repetitive at all – the notes of it will affect viewers just as strongly by the end as it did when they first heard it.

The cinematographer of Tangerines is Rein Kotov (best known from 2012’s light Estonian comedy Mushrooming) and visually, the film truly is pleasing – it brings pleasure to see how beautiful light falls on beautiful faces full of life. It seems that the director knew exactly what and how he wanted it to be filmed, as the constant slow movement of camera has been used in his previous films and here as well. While the film has a small cast and was shot in just one location, it doesn’t feel claustrophobic at all. Director shows us glimpses of an outside world by introducing new characters, who quickly disappear again after their contribution to the story development.

It is always a unique experience to watch Georgian films. Not only haven’t their films yet been castrated from their national identity, but it is something that they take pride in and emphasize often in the movies they make. You can feel that Georgian films are really from Georgia and this experience can’t be transmitted from any other country.

Tangerines takes one step further – being the first co-production of Georgia and Estonia, it manages to capture both Georgian and Estonian spirit and portray it in an appealing and touching way not only to the audiences of these two countries, but to the viewers from all around the world.

Featuring a song that was popular amongst fighters back in the war in 1992, Irakli Charkviani’s Qavagadi Navi (A Paper Boat) – a promise to return no matter what, this film is guaranteed to make a lot of returns to one’s mind long after leaving the cinema. Not because of sophisticated techniques and stunning effects, as these things tend to fade, but because it transmits the importance of such human virtues as dignity, respect and willpower from somewhere in-between the captivating images. Because it tells so much by saying so little.

“Tangerines” will be presented at Vilnius International Film Festival in the Baltic Gaze competition programme.