Among drum and bass enthusiasts, DJ Marky is definitely a well-known name. He is a Brazilian DJ who was “discovered” by Bryan G, the head of V Recordings label, and managed to break out of the local scene to join the rows of the world’s top DJ-s. In 1999, Marky was awarded “The Best New DJ” by the British music critics, number one DJ in Brazil at RMC Awards, and Estonian audience gave him a very warm welcome when he was performing here the last time. Marky also runs a record label Innerground Records and releases his own stuff from time to time. DJ Marky will be playing at a party called Tjuun In, held at cafe Sinilind in Tallinn this Friday.

This interview by DJ and radio host Liisi Ree aka L.Eazy, was first published in Estonian by Rada7, music site that keeps its fingers tightly on the pulse of everything interesting happening in music. 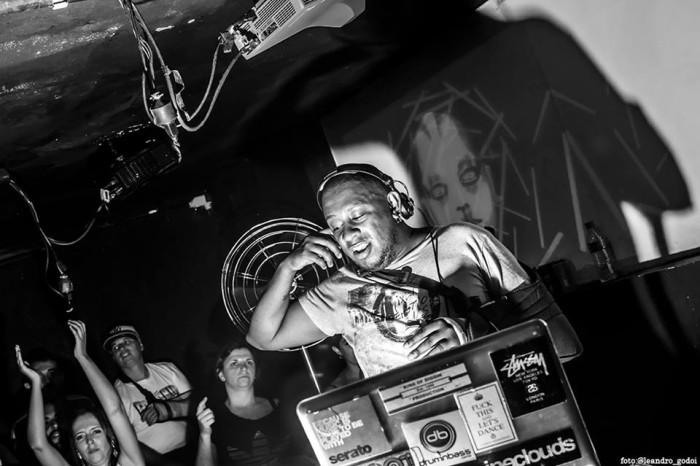 How did you find your way to DJing and producing electronic music?

I have always loved music, of course, but I started DJing not long after a friend of mine got turntables and I tried it for the first time. I remember putting two records on the tables and mixing them pretty much straight away. From that moment on, I was hooked and it was a short ride from playing music to trying to make it.

Being a world-famous DJ isn’t really an easy task – when and how do you get to rest? Is there anything that you don’t like about being a DJ? And what do you love most?

I do have a few weeks to rest between tours, but in general, I try to take a few months off around Christmas just to relax and spend time with my family. I genuinely love everything about my job, the only thing I would change, if I could, is the time I spend flying. Otherwise I wouldn’t change a single thing.

How do you like to spend your free time mostly? With my son, no question. When I am at home in Brazil and have some free time, I can’t think of anyone better to spend time with than him.

Funniest moment while DJing that pops into your mind?

Too many to mention I think. Some crazy things have happened at parties I’ve played at and it always amazes me what people get up to in clubs.

If you weren’t a musician, what else would you be doing?

I have absolutely no idea. My parents wanted me to do a “proper” job like a fireman or a policeman, but I’m lucky enough to have been able to do what I truly enjoy my whole life.

You have been running Innerground label for over ten years by now. How does it feel consistently putting out new music? Do you see the label influencing others?

It feels great. It is also nice to see that you can pick tracks that not only work on the dancefloor, but that people want to play them on their iPods, on their car stereo or at home. We are all about good music. We have a label that’s strictly about liquid funk, but that’s not the case. We’re always looking for best music available, from well-established and brand new producers alike.

Who are your favourite producers at the moment? Who inspires/have inspired you the most?

Wow! That’s really tough and political all at the same time! Hehe! There are some great producers out there right now and the scene is stronger than it’s ever been. I think no one can deny that Calibre is one of the greatest. We’ve worked on some tracks together and he has done some work for Innerground ‒ he is a true master. There’s some great talent in Brazil right now too and some big things happening in Eastern Europe and Russia. Plenty to listen to and be inspired by for sure.

If you had to choose: DJing or producing? Large arenas or intimate settings?

DJing in intimate settings. I like producing, but when I am making a track,all I can think of is how it will sound in the club. I love Djing as well, and in the small clubs it is great, because you can pick up the vibe of the venue much better. The audience is closer, so you can see, touch and hear them and the energy you can get from the crowd is amazing.

What do you think is the key to a successful performance as an artist?

Energy and believing in what you are doing. Also, you have to put some effort in wherever you can.

You are also known for being into the art of vinyl crate digging. How does this contribute to your artistic capabilities?

It keeps my mind open to new possibilities and reminds not to get too sucked into one genre all the time. I think it is important because I can then take those influences, whether it’s a harmony or a sample, into a new track and it might give it an edge. It’s also great picking up exclusive bits of vinyl that were previously unavailable.

Do you think vinyl will ever “come back” or will this always be a niche for a small audience?

I don’t think it ever went away, it just became more specialized. I hope it stays like this, because the sound you get from vinyl, especially for drum and bass, is hard to replicate. Other formats are easier to transport, obviously, and cheaper, but the sound quality from vinyl is still fantastic.

As you are deeply involved in drum and bass and DJing all over the world at the same time, where do you see this genre heading in 2014 and beyond? What is big in Brazil at the moment?

I would like to think that if it stayed the same, it would be in a really good shape. Brazil has different genres in different areas of the country, but techno sound is having a real revival at the moment being hot on the heels of deep house movement. Drum and bass can only get better in my opinion.

Do you have any memories from the first time you visited Estonia back in May 2002 with Stamina MC?

I definitely remember the vibe being immense. Estonia is a beautiful country, I know that for sure, and I am always happy to come when I am invited.

What would you like to say to people who will come to see you on Friday?

Thank you, thank you, THANK YOU! I’m really looking forward to sharing the evening with you and see you on Friday!

More information on the event is available here.