This year’s Schilling, indie festival held in a small Estonian town of Kilingi-Nõmme, is already taking place on this Saturday 5th of July. One of the bands among such acts as Merchandise (US), Jeremy Jay (US), Extraperlo (ES), Streak and the Raven (FI) and others is a Swedish synthpop duo Kite whose music strikes a feeling you have somehow travelled back to the 80s. Band consisting of Nicklas Stenemo and Christian Berg, that started out in Malmö in 2008 and is now residing in Stockholm, holds a vibe that is often similar to other Swedish groups – Stenemo’s vocal sounds like a male equivalent of The Knife’s Karin Dreijer Andersson, but with a less android background. Yet, Kite has enough character to be a band in its own right. I dare to doubt it’s a coincidence that Kite is the first act my Swedish acquaintances have brought forward when asking what’s currently good in the local music scene. Duo’s vocalist Nicklas Stenemo told Wader what’s the band all about. 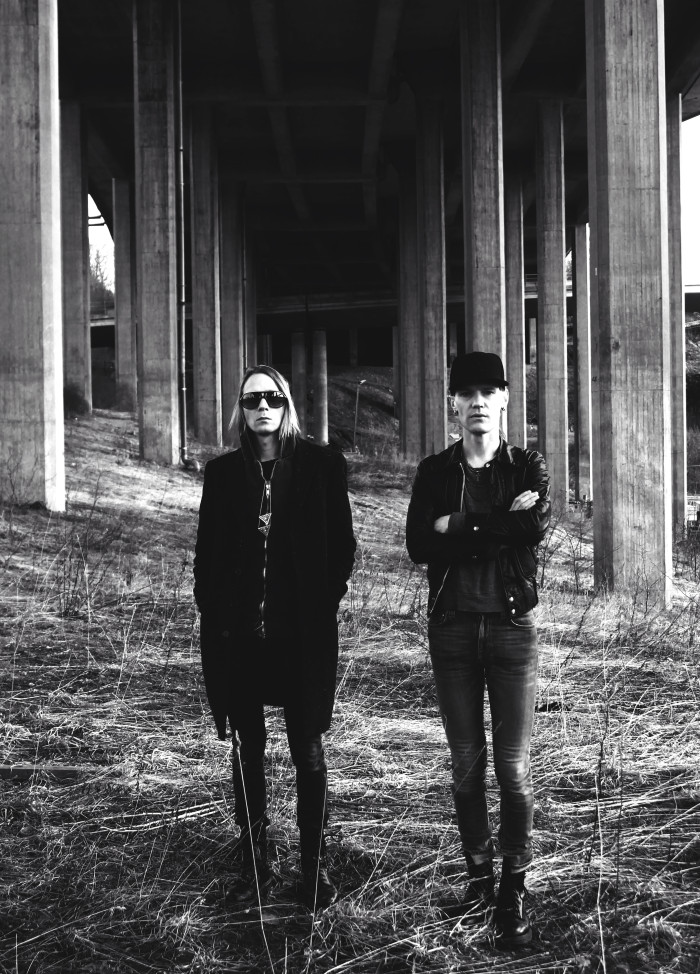 Not much information can be found on the biography of Kite when going through the online media in English, so here comes the typical question of how did your paths cross and where the idea to form a band?

We have known each other from our earlier bands since the late 90s, but it wasn’t until 2007 when Christian moved to Malmö that we started hanging out. We were both trying to write music for our solo records after our latest bands had crashed. He was in Strip Music, and I came from The Mo. I guess we both missed collaborating with other people, so we started making music together. Very soon after our first song “My Girl and I” was born.

You officially started in Malmö. Did the music scene there had some kind of influence on starting a band or picking up this kind of sound?

No, I didn’t know any synth bands in Malmö. I think the electronic thing came to us cause it’s an easy way to produce music and play live if there’s just two people.

Your sound carries the true vibe of the 80s. Where do you draw your influences from and what’s the story behind the evolution of your own tastes in music?

We have a lot in common, but we are also different in our playing and listening careers. I started as a metalhead playing fast lead guitars, moved on to stuff like David Bowie and then started to listen and learn from the big pop songwriters. I also went pretty deep into to the creation of film music composers like Morricone and Michael Nyman. I maybe shouldn’t talk for Christian here, but I think his background is more like the stuff by The Sisters of Mercy and Spacemen 3 , but he has always listened to synth music a la Depeche Mode and minimalistic synth like Kraftwerk too. I guess the 80s feel in our music comes from the fact that we use old synths and like big melodies.

You have already released 5 EPs, but no LPs so far. Can we ever expect an full-length from Kite or you have some kind of a principle not to do this at all?

No, we don’t have any principles against it, we just really like working with EPs. I think it’s hard enough to come up with five good songs. We also want to release the stuff we have written to be able to move on so the songs wouldn’t get too old for us. And now after 5 EPs it has become a nice concept to hold on to.

Main music genres that keep whirling in my head when thinking about Swedish music right now are powerful dance-pop, synthpop, raw punk and post-punk. When starting the band, did you ever consider stepping on the territory of something else than synthpop?

No, the first EP we recorded sounds like it does because of the synergy between Christian and me, and because of the synths we had, which we liked to work with. After that, we wanted to be consistent and write within the frames we had already developed. I think it’s good to have certain limitations. We have never been any good at analyzing what could be the perfect music for a breakthrough. For us, it’s more a personal thing well-kept from the world.

Nicklas, your distinct vocals are an important part of Kite’s sound. How did you develop this kind of timbre?

I don’t really know. (Laughs) When I started singing in Kite we just turned the vocals to a really high key, and that gives it kind of a desperate vibe because I can hardly sing it. At that time I also listened to a lot of Nico which might have influenced my sad phrasing and ruff edges.

If you had a chance to compose a soundtrack for a movie that already exists, what would that be?

What’s next for Kite?

The important thing now is to write and record EP no.6 that hopefully will be released this year. And then we will do some gigs too.

What can we expect from your sixth EP and how does your writing process work?

Christian lived in Shanghai for six months and has just moved back to Stockholm, so we have been writing on our own and sent each other ideas to work with. Now we’re gonna start working together again and sort out what is good and bad of what we have come up with. What we have so far is pretty huge and slow beating stuff made for big stages and waving flags, arena synth so to say.

What would be the coolest place your tours have taken you?

We have toured in China for four times and that must be the coolest and most interesting tour we have done. It’s so nice to see that music is an international language, and nice to hear your own music in another culture. That makes you listen to it from a completely new angle.