Douglas Dare is a London-based singer-songwriter, whose music takes the listener to a melancholy journey. His first album, Whelm, which was released in May, is intimate and dark and touches the themes of nature, especially the sea, the vastness of it and the emotions it brings out. Douglas Dare has recently been touring with artists such as Nils Frahm and Ólafur Arnalds, who are also his labelmates at Erased Tapes. 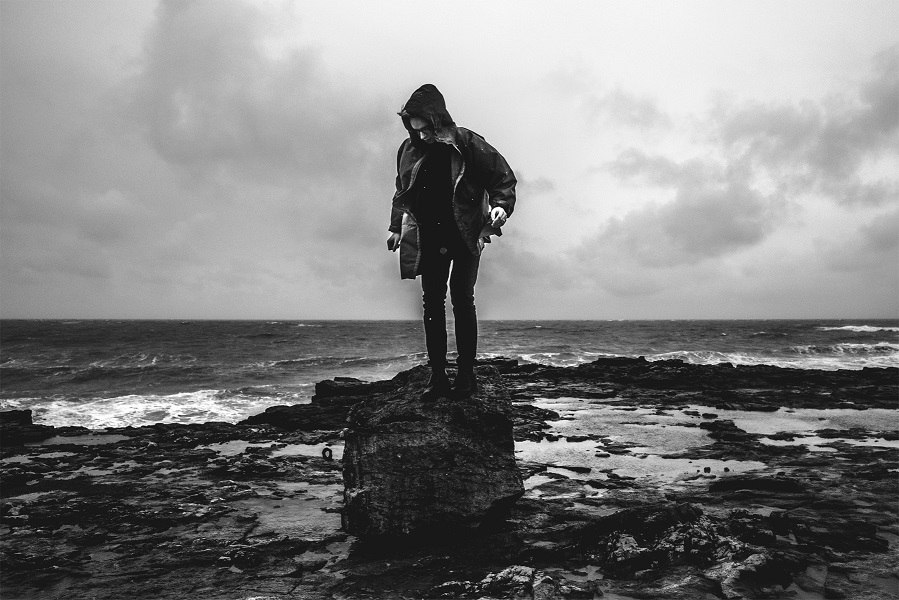 How did you start making music?

I had music around me from a really young age. Both my parents played music together and I went to gigs with them since I was 4-5 years old. I wasn’t particularly fascinated with it but it was something very normal, a part of my everyday life. It wasn’t until I was 14 that I started to play the piano properly – I always knew how to play it but I really got into it around that age. When I was 18 I went to university to study the piano, but I ended up being so inspired by the singer-songwriters around me that I decided that I wanted to sing as well. Something clicked and I realised this is what I want to do.

What is the story behind your first album Whelm?

It wasn’t a concept album per se. A lot of the songs are the first I’ve ever written and some are a few years old. It kind of represents the changes I’ve gone through on my journey in music. The changes that have taken place in me are reflected in the material, at least I can feel them strongly. I’m really happy that the first songs I’ve written are ones I can be proud of. When I started to choose the tracks for the album, they started to have a common idea running through all of them. That’s why I chose the name Whelm, that’s why I shot the artwork where I shot it and why it has a certain aesthetic – it really helped me bring the whole thing together. One basic theme of the album is nature and more specifically water. I grew up in Dorset in southern England, which is by the sea and I’ve always had an affinity with it. As a child I was really intimidated by the sea but I love it now. I think my changing relationship with it is also represented on the album. I was also inspired by historical events in the world, the basis of most songs are stories that are more widely known.

How much do these stories portray your own emotions?

It is difficult to avoid that. As a songwriter I always wanted to write music that others could relate to, that wasn’t self-centered. The music that I’ve always enjoyed is the kind that touches me – where I know exactly what the song is about and I can empathize with it because I’ve felt the same emotions myself. I always wanted to be quite broad when writing music, to open it to the listener, not just me.

Your whole album has a haunting, melancholic feeling? Do you listen to similar music?

I live with two other artists who also write quite dark, melancholic stuff. But the irony is, we love our happy pop music as well, our guilty pleasures are properly guilty.

Which musicians have influenced you the most?

My favourite record from this year was St. Vincent’s new album. I’ve followed her for many years and her music inspires me because she also tells stories. It’s also quite dark in its tone, but the instrumentation can be quite dancy. The last album is quite bright, which really inspires me, because that is something I would like to aspire to as well. I think I will probably always have an undercurrent of darkness to my music, but in terms of instrumentation and simple things like tempo, I feel they will change. From pop music I also like Röyksopp and my biggest influences of all time are PJ Harvey, Thom Yorke, Leonard Cohen, Joni Mitchell – classic songwriters who have taught me a lot.

What came first, the lyrics or the music?

I’ve always had an interest in poetry but I haven’t written any myself. I’ve actually been more inspired by some singer-songwriters’ lyrics, for example, I get so much from just reading Leonard Cohen’s lyrics without even listening to the songs. For Whelm I wrote most of the lyrics first. With the album also comes a booklet called 9 Poems which is closely related to the lyrics of the album. I wanted the listener to get an idea of where these songs are coming from and what lies behind them. There are a few songs though, that I wrote the music first, “Unrest” is one of them. Now I tend to write the music first.

Are you already working on your next album?

I’m just writing music, I dont know where I will end up. First me and Fabian Prynn, my percussionist and producer, wanted to make music in the rawest form, but lately we have also been experimenting more with electronics. Right now I’m sat here with a drum machine and pedals everywhere, I’ve also started experimenting with analog synthesizers a little bit. It’s possible that the next album will be a bit more electronic, but we’re also planning a lot of gigs, where we only use real instruments.

How did you start working with Fabian Prynn?

We met in university, he was at my course. We discovered that we have a really similar taste in music and became friends. We played in a few bands together and in the last year of uni I invited him to participate in my project. He agreed of course. We tried recording with a few producers in the beginning but felt that it was not working that well so he decided to produce the music himself. Whelm is the first album he recorded but now he’s also working with other artists.

What have you planned for the future?

All I know is that I don’t want to repeat myself. That’s the objective of my musical life and life in general. I don’t know what will happen, it’s kind of like going into the unknown. I want to contribute to this world. I don’t know what the second album will be like style-wise, since I’m writing a lot of different music at the moment. There will be the process where I figure out which direction I’m going in. I’m in the process of finding myself.