“The Drone of Monk Nestor” by Karl Saks.

In drama theatre the power of the performance usually lies in an actor and usually in the most famous actor. Sometimes the power may also lie in the spectacular set design or costumes. In “The Drone of Monk Nestor” there are no world known actors, the aesthetics is also, not to say ascetic, but quite simple for sure. Despite that there is a great power or I would even say – force – present in this performance that plays a big role, maybe even bigger than that of the performer.

Step. Shoulders. Shoulderblades. Arms… avaritia – greed. Yes, sure, greed not only for material goods, not just for amenities but for knowledge. Mea culpa, mea culpa. Step. Forth. Back. Step. Arms. Limbs… luxuria – lust, lechery, glee. Yes, lust, not only for another body, for spread out limbs, no…. no… but for another soul. My Lord… My Lady? Madonna? Mamma mia… mea culpa, mea maxima culpa.

The lighting in this performance is very important. At the beginning everything is dark and only a relatively small rectangle of light appears. The performer walks from one side to another several times. After a while another rectangle appears and the performer starts to use it for movement. Then appear the third and also fourth rectangle of light, creating a square the center of which is still in the dark. Obviously the performer can or wants to move only in the light. Not once does he step into the dark zone, he does not experience the dark side. It makes me think that he is absolutely dependent on light. What is light? It is something that enables you to see how everything looks like. Thus, it is more powerful than human being and the performer – monk respects it. In a way this performance is very humble – it reminds us that there are more powerful forces than humans and maybe we shouldn’t fight but respect them.

Step, if step can it be when the body is twisted. Toiling. Innards… invidia – envy. Oh envy, yes, the scorching in the intestines, wringing inside…. me, me, me not them… mea culpa… Innards… ira – anger, rage. Oh, who has not come across anger? Irritation… leave me alone, oh, leave me.. dies ira, dies illa… 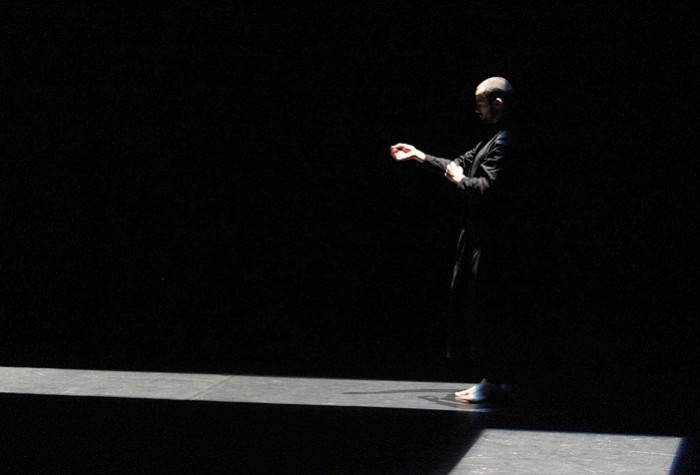 “The Drone of Monk Nestor”. Photo by Nele Aunap

Shortly after the performance I don’t remember much about the movements. Karl Saks walked in the light, he was fighting / dancing and doing other things, but his movements I have already forgotten. I mustn’t have paid much attention to them during the performance. I know that he used mostly his upper part of body, but I know also that during the performance I had a feeling that he expresses his inner world. He was really concentrated on himself – how he felt about the things that happened around him at that moment. I think that his attention was absolutely aimed only to himself, his own feelings. It looked quite powerful and I just appreciated his ability to dance so excellently. He was so self-confident, that at one point during the performance I thought that I shouldn’t even be there.

Another twisted step, groping in the ground, groping around. Gallbladder… gula – gluttony. More, more, more… I can get no satisfaction… more, garishly more… of this and that. Mea… mea culpa… mea maximissima culpa.

It is possible to describe many symbols used in this performance, but I chose only two – those which appeared on the stage from the ceiling. There was a black slab in the middle of the performance and a dome from some church spire in the end of the performance. The black slab confused me at first, because it appeared unexpectedly. The man was moving around the stage, inside the lighted square had appeared a round figure of light. Then a black slab, typically used in gymnastics lessons started to slowly move down from up above. When it reached the floor, the monk fell on the ground in an unnatural position. Then the slab started to raise again, while the light very slowly faded out. When the light went on again, the monk was ready to move on. It seemed to me like a metaphor for monk trainings – they can exhaust you physically and mentally almost to death, but some greater force (light) can make you move on. The second big symbol that appeared in the end, forced the monk to beg in front of it – this also makes an association with the power of church and the monk’s necessity to be humble. Thus, these two symbols made the previously abstract narrative very concrete. It somehow took away a possibility to fantasize about the meanings of monk’s movements and his relationships with sound and music. For me these symbols were too concrete and uninteresting as it was possible to understand these symbols too easily.

No more steps, no more moves. No spine. Socordia – idleness. Idlendess is the father of discontent. Why bother? Anything. Nothing. Pater noster… madonna mia… ora pro nobis, nobis peccatoribus.

The performance was ascetic in stage design and costumes. Yet, at the same time, there were very strong components, for example the light, symbols and also the performers inside world. Although at some points I felt excluded from the performance, I also noticed that this process of performing and the necessity to do it, is very important to Karl Saks and maybe it is the biggest power of any performance.

Purple… the color of emperors, the color of cardinals. Cardinal… cardinal sin, cardinal virtue. Crown. The humble are elevated and the proud are cast into darkness. Crown of gold. Crown of glory.