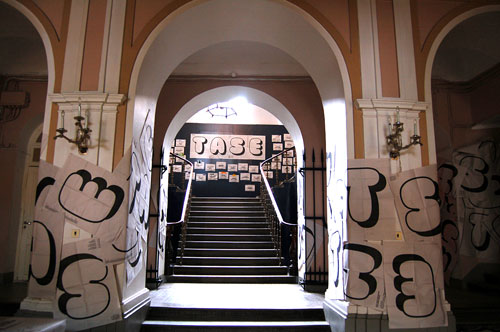 TASE exhibiton of the Estonian Academy of Arts.

Since the beginning of the 20th century, the Estonian Academy of Arts has been an important centre of Estonian art education. The EAA is striving to become a leading international centre of innovation in the field of visual culture. Currently there are more than 1 200 students enrolled in the Academy.

The Estonian Academy of Arts collaborates with more than a hundred universities worldwide and belongs to several international higher education networks. The lecturers and instructors are internationally recognised artists, architects, designers, historians, and scientists. Visiting lecturers from universities in Estonia and abroad are regular guests.

The programmes offered for the academic year 2014/2015 are animation, urban studies which doesn’t require any course fees from international students, design and engineering in cooperation with Tallinn University of Technology, and cultural management in cooperation with Estonian Academy of Music and Theatre and Estonian Business School. In addition to that media graphics on the B.Sc. level is welcoming those who also want to study in Russian.

Deadline for admissions is 15th May 2014. If you already have ENIC/NARIC Centre evaluation then you may apply until 2nd July 2014.

Additional information about admission can be found here.