What is the reason behind the desire to put on joggers and dance for nine hours in a club? What is happening with one as (s)he is dancing monotonously the whole time? What keeps this kind of action still alive? These were the questions asked by Kadri Noormets and Kadi Maria Vooglaid in their research on club-music.

In Estonia a decade or so ago it was socially not accepted to go to dance parties without a companion. Those days, it was almost improper to dance alone. Since then, there have been quite rapid cultural changes – not only is the society ready to accept people dancing alone in a dance hall, it is also ready to set up this scene on the stage. 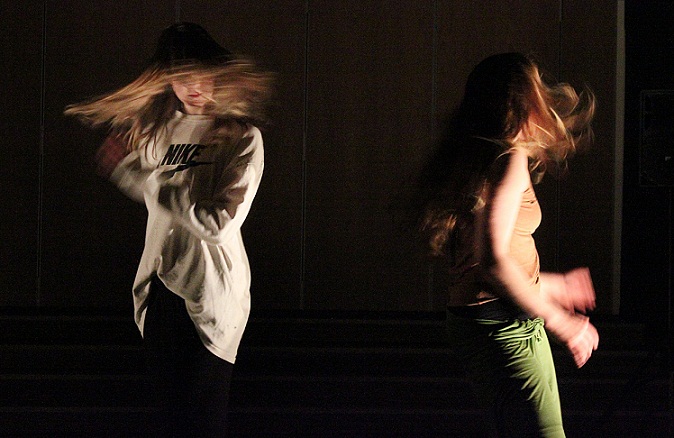 Two young dancers informed the audience about the terms of moving around in the room and leaving it during their performance. It was allowed to move around and to go away, but not to go on stage. Then the lights were switched off. On the floor from opposite corners two warm spotlights were turned on which lit dancers who stood barefoot, back to back, wearing sport clothing. Techno music was turned on.

Kadri Noormets and Kadi Maria Vooglaid say that we dance in the night with people whom we do not know, shoulder by shoulder. We do not ask questions, do not judge, do not expect anything.

They started to dance, monotonously, repeatedly. They danced for 60 minutes in the typical club-dance style while retaining their own idiosyncrasy.

Two young females did not dance together – they just shared the space and the time. They danced for themselves, for their trance, for their own catharsis; not being totally aware of the other’s presence. At the same time, it was not only a journey into inner meditation. Taking into consideration the club format, there was also the aspect of sharing the place – why come together rather than dance alone at home? The location of dancers in respect to each other on stage showed exactly how it works in clubs: people are in the same space, hear the same music, but they tend to dance apart- faces turned toward the DJ, not a partner, because usually there is no partner.

The bodies and costumes of the dancers did not bolster up a distinct aesthetical value, but they were quite good casings for internal journeys and trance. Even if their concrete moves and choice of clothes could be dissevered and the ingredients analyzed, it is not significant in the concrete semantic field, where the main motivation is subjective inner feeling. In this case, it is also difficult to call the sequence of dancer’s movements a choreography in the classical sense, as here the choreographer is the music that moves one’s body as it likes. It is also hard to say, if it is an improvisitional dance or not, because there is nothing added to the quite concrete sequences of the same movements, which are typically used by people who dance to club-music. Hence, these kinds of performances always widen the definitions of abstract notions like “choreography”.

Thataway, the dance-performnace “60’ state of” is an introspective research on captivation of club- and trance-dance. Introspective due to the fact that the artists do not represent their research’ outcome in another language than the club-dance language itself – they show us exactly the same that is seen in the clubs and the meaning of this is not said out explicitly. The difference from the actual club-situation is that it happens on stage, where there is an oppurtunity to observe dancers from the distance; in the club there usually is not necessary space between people. Kadri Noormets and Kadi Maria Vooglaid give to the audience a change to make their own research with a model example of club-dance.