Drum & Bass music in Estonia doesn’t get huge hype and is only concentrated around small underground groups of music goers. In this very case Denmark was a twin sister to Estonia only four years ago, right to the point C.A.R.T crew was established and started its magic. 2 DJ’s and 2 MC’s started playing every Thursday night on Christiania Radio, right in the heart of Copenhagen’s small, but noble place – Freetown Christiania. 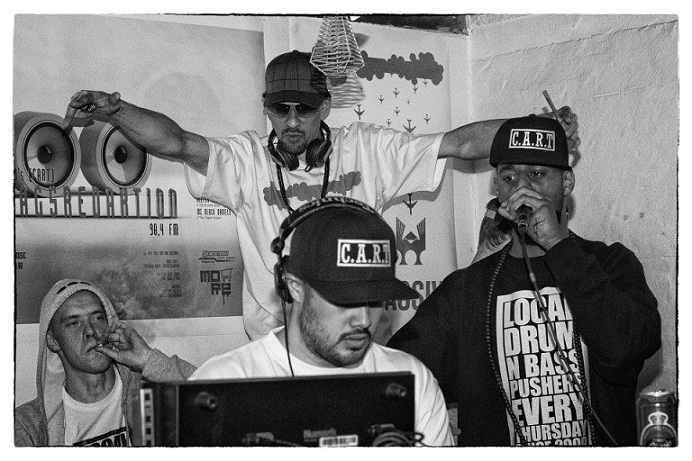 The crew consists of DJ Breakfast, DJ Bobby Six Killa, MC Black Daniels & MC Alvarado. So what does make them special and how did they manage to establish a solid brand in the urban bass environment of Copenhagen?

For those who hear about you for the first time, can you give a small history lesson?

MC Black Daniels: I started playing drums when I was a kid and DJing in my teens, I was in bands and stuff. In 2008 and I accidentally started MC’ing on a D’n’B gig and got hooked.

Bobby Six Killa: I met DJ Breakfast in Christiania, hah, it’s just how it is – you meet certain people in Christiania, and then we met MC Black Daniels at the gig in the meat district.

MC Black Daniels: DJ Breakfast said: “every time I play I want you to MC”. We were really lacking in D’n’B scene in Copenhagen, there weren’t any MC’s. So I did few gigs with them, they started the radio broadcast and I was coming over; format never changed: four hours of live DnB every Thursday on Christiania Radio. It was a great practice, since you’re live on the air and you can’t miss out. It became a good routine and we started getting booked more and more.

Bobby Six Killa: In 2009 we started organising our own club nights because we thought that Copenhagen doesn’t deserve crappy music and we had no competition at all so we gave people good music to hear, gave people the possibility and opportunity just to go somewhere else – people needed somewhere to go.

MC Black Daniels: Doing club nights helped us to be somebody, it was a HUB – we could invite other DJ’s and showcase what we were doing. First parties were made as a favour and homage to all the people I MC’d with, they were free and no money was involved. Party was called “MORE!” because city needed more D’n’B and we supplied it. We wanted the same vibe of here as it was in London and we created it.

So is C.A.R.T a community and what does C.A.R.T stand for?

What’s your philosophy? Why do you do it?

Bobby Six Killa: Because music is the only power that can touch your mind, your body and your soul at the same time.

MC Black Daniels: I keep on saying this, but we are nothing without the crowd: human behaviour, human emotions, expressions, that’s why we’re here for. We trying to give music with love and respect, without any rush or hustle.

MC Alvarado: Even before I met the whole C.A.R.T crew, I was going out to clubs and everything was so standard, people even didn’t know where the DJ is, and when I saw C.A.R.T for the first time, I was astonished, people didn’t give a shit about anything except music.

Can you tell me about Copenhagen bass culture in general? Who are the biggest cats?

MC Black Daniels: The biggest character in the danish bass culture industry is a danish crew called OHOI! They are the biggest reason for the bass cultures progress in Copenhagen. Three of the main crew members in OHOI! are today very important industry people: 1) head of the Danish electronic festival STRØM 2) director of RAW – Scandinavians biggest clubbing event 3) director of a cool venue in Copenhagen “Pumpehuset”. F.U.K.T. are our good friends. They started in 2002 as a live D’n’B act. In the beginning band had a jazzy sound, but from 2004 they changed the format: removed the trumpet parts, added samples and started to plan their live act as a club DJ would. Musically they are very close to how a DJ would play drum’n’bass, but the energy they give is from a real live band. Their drummer is Anders Meinhardt and arguable he is the most skillful drummer in Denmark. Nico “Primetime Massive” Defrost, producer. He has a crazy character, he’s 47, and he used to be a musician when he was a kid, they had a child-band called “Children power movement”, only ones who were doing diverse music then and I think he got a lot of hype from that. Ended up doing National Radio and really big stuff for that era. He spotted a lot of talents, pushed some people here and there. He’s always more about music than money and fame, very modest and sometimes a shy guy. His father is an old school blues musician, Jamaican, hanged out with Bob Dylan. Of course there is C.A.R.T who established itself as a National Drum & Bass provider and some new interesting artists in bloom. Amongst others are DJ SHIELD, Beastie Respond and Bottled in England.

Since 2009 the crew has been escalating fast and have been playing at many underground raves and parties. They played at some of the biggest festivals in Denmark (Roskilde Festival, Distortion Festival) and supported musicians like Andy C, Camo & Krooked, Survival, Shock One, S.P.Y, Apex, Culture Shock, Metrik, to name a few.

C.A.R.T. will be performing in Tallinn on Friday (19th of April) at The Museum of Contemporary Art of Estonia. Facebook page of the event.