Jeremy Macachor: in the whirlwind of music

Jeremy Macachor is a curly-haired Californian lad, the brain of Macajey, a project that got its official yet modest start at an art exhibiton “Papergirl” held in Tartu, Estonia last year, a musician, and a man who helped to bring about the EP and debut album by the Europe-conquering Estonian group Odd Hugo. Macachor’s, who has also lived in London and in Tartu before, but is currently residing in his sunny home state again, music is natural, aerial and using dreamy vocals. He plans on returning to Estonia this year to give a few concerts in Tallinn and in Tartu – on this occasion as a much more confident artist, of course – and who knows, maybe even settle down here for some time. I asked Jeremy what is the difference between being a musician on this and that side of the ocean, in what correlation are dreaming and living in his life, and how not to lose your sound and soul in this colorful spectrum of contemporary music. 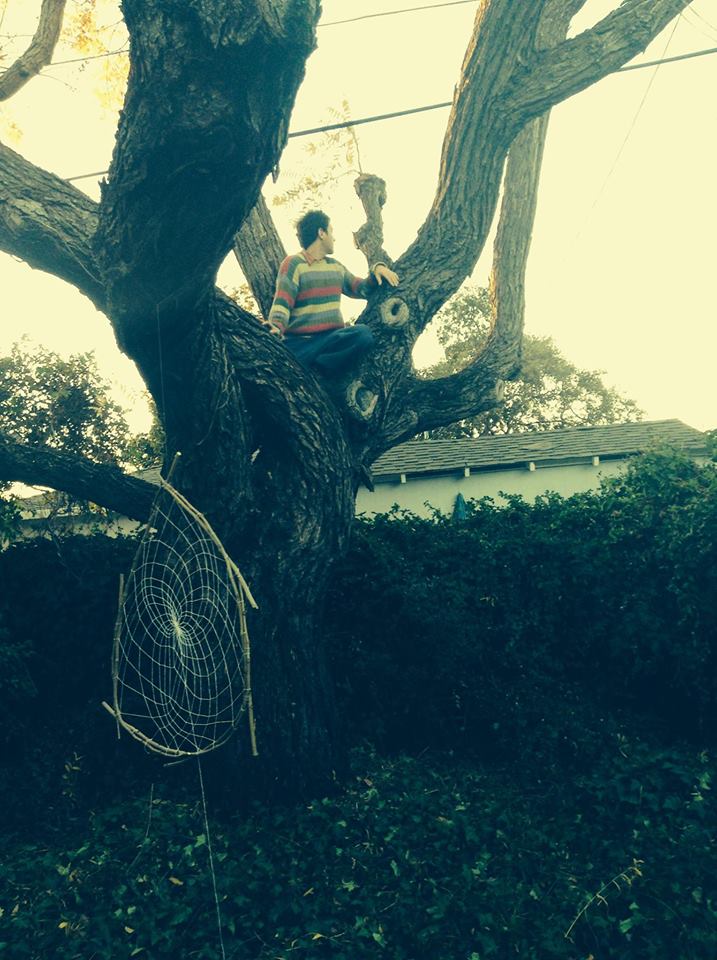 Born in Palo Alto and raised in Santa Clara, Jeremy grew a wish to move to Europe in his early twenties and so he did, changing the sunny suburb of San Fransisco for the grayness of the grand old Great Britain.

What made you want to move to Europe? Does being an American in London feel a lot like “an Englishman in New York”? You might have noticed we have this thing for the USA here – but when considering moving to London did you have some sort of a European dream, lifestyle-wise or any other way? Do you think it is easy for a young musician to lose his soul and sound in a big city?

I guess it was just down to a need for adventure and traveling. A gut feeling of something I was craving to do, but I wanted to have a plan and not wander around aimlessly. I therefore enrolled in a yearlong audio engineering school and went there in September 2008. A lot happened in that year that I couldn’t have dreamed of before going. Getting asked to play in a band barely a month after landing, securing an internship at Greenhouse Studios in Iceland for after I graduated, road trips around England, drinking way more than I was used to and embarrassing myself on a few occasions. It was very easy to get caught up in the whirlwind of London and just go with the flow. That whole experience definitely shaped me musically and as a person, and made me want to see more of Europe.

Your music has a certain aerial-earthy vibe and dreaminess to it – are you a dreamer yourself? Is it necessary for a musician to be a dreamer? What are your coping mechanisms with banality of everyday life?

I’m definitely a dreamer, but trying to get myself more grounded these days. I think it’s such a part of me that I’ll always have that spaciness to my music. I don’t think it’s necessary for a musician to be a dreamer, but all of my favorite artists have that dreamy/grandiose quality that connect you with something bigger. Although I really respect the people that can do not so serious music, like Flight of the Concords or this movie called The History of Future Folk. I love that down-to-earth vibe in music too.

Hmm..coping mechanisms with everyday life…I would say that the banalities of everyday life are necessary and I enjoy them, but I have to make sure I create opportunities, so at the end of my life I can look back and be satisfied. Everything comes in cycles. Even a whole year can be really boring, but I know that if I put out a strong energy, things won’t stay the same forever.

Before starting making music as Macajey you played the guitar in several bands. Was it intimidating at first to perform music alone? During the last year you have put out your debut EP, launched a music video for your song “Water” (featuring Elle Leatham) and played some festivals – what has changed during that time? Do you feel more confident about your solo act or are you dying to collaborate with other musicians, join a band maybe? Who are those artists you`d like to work with? Maybe someone here in Estonia?

I have always done solo even when playing in bands, so it wasn’t intimidating to start. It was actually very liberating when I decided to focus on my own music and push it forward. I felt like I had taken control of my life and with this project it can really go anywhere. Not much has changed in the last year other than getting more used to with my live setup. I’m comfortable with playing guitar live cause there’s always something to do, but in the electronic world it’s a little different as I’m using samples. Sometimes there’s 20-30 seconds when there’s not much to do, and that can make you feel really exposed. I think it’s an art in itself to look busy when playing electronic music live! Learning how to play drum pads better and being creative with triggering stuff has been a huge discovering process. Like picking up a whole new instrument.

I’m loving this project because I can do it anytime of the day, anywhere in the world and not be dependent on meeting up with bandmates to rehearse or having to book studio time. Meanwhile, I can collaborate with anyone thanks to the Internet. I still want to work with more vocalists. In my absolute dream world John Frusciante, Björk, Cedric Bixler-Zavala from The Mars Volta, Andreya Triana, Cat Power (I could name a bunch more) would be calling me up to collaborate on songs, also such producers as Gold Panda, Floating Points and Slow Magic would be really cool to work and tour with. I’m also really happy with the collaboration me and Elle Leatham did, hopefully she’ll have the time to do a few more on the next release.

Im quite sure many of our readers are curious about how a Californian guy ended up working with Odd Hugo (for the reader: Odd Hugos debut EP These Gray Fields was mixed and mastered and their self-titled debut LP mixed by Jeremy) here in Tartu. Explain this to us, please!

I first met Odd Hugo when they were known as Prägnantne Brigaad. My wife was friends with them and she introduced us since they were thinking about doing some recording. I had been working with Martin Kikas at Ö Stuudio and he let us use his studio to do the very first EP. Luckily they were just starting the recording of their LP when we visited Tartu last year, so I got to be involved. Hopefully we’ll get to do more stuff in the future!

Youre a musician who knows how to produce a song – does this change music-making easier for you or do you tend to find yourself polishing one tune for months, or even years, maybe? Is it easy to let go of what youve been working on, to upload your music to Soundcloud and other channels for others to listen?

Every song is different, but I’m getting more fluid in my mixing and producing. It usually takes about a week or so to finish a song from the first idea to a finished product. I can get 90% of it done in 5 hours – the rest of the time is just fine tuning of mixing and arrangement. I still suffer from fear of criticism though, so I usually hear a bunch of things that I don’t like in a song that I thought was done right after I upload it to Soundcloud. It’s a psychological battle!

The hardest part is to just get in the mood to write. I’ll know instantly when I sit down to write whether something good is going to come out or not. Usually something has to happen in my life for the best songs to be born. If I’m doing the same thing every day, it’s hard to get the right feel to make music. But it can be as simple as taking a ride to the beach, taking a hike or gardening to change my perspective. Usually, doing something in nature gives me a good writing mood. And of course big life events like getting married or moving across the world make for good writing material!

What are your plans for the future? When can we listen to your debut LP? What are you plans for Estonia this autumn?

I’m working on my debut LP right now and I’m hoping to have it done by August/September. I’ll have some more gigs here in the Bay Area and Los Angeles, then we’re coming back to Tartu in the beginning of August with the plan to stay there permanently, so I’m setting up shows in Tartu and Tallinn for starters. Then hopefully branch out a bit to Riga, Helsinki, Stockholm, possibly Berlin and Cologne too as I know some people there. My wife is going to start VJing at shows, so we’re working on that. Lots of stuff to look forward too!

More of Macajey’s music can be found here.