Maria Arusoo Opens the Doors to her Wardrobe

“Wardrobe” is a collaboration between Wader and Trash to Trend and it’s about the style and substance found in various wardrobes. It’s about the reasons that people have filled their wardrobes with the things they have. It is also about how often new residents are included in the wardrobe and what do they have in common – what triggers the choices. It is about how the items in the wardrobe change over the course of time – literally, but also figuratively. For example, have you redesigne something or had anything tailor-made? It is about how often the residents of a wardrobe change and what happens to them. And about what makes some of the residents so special that they stand up to the test of time while others do not. 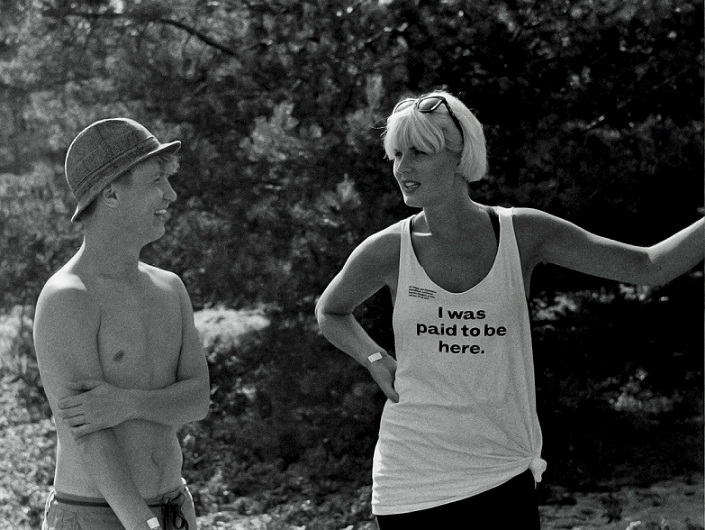 Since I don’t verbalize the contents of my wardrobe everyday, at first it was quite difficult to answer the question whether I have something there that’s especially meaningful. So I took the easy way out and literally opened the doors to my wardrobe to see what’s going on in there. I discovered that even after recent moving I have managed to keep three T-shirts with the slogan “I was paid to be here”. These shirts were made to commemorate the anniversary conference of the Estonian Academy of Arts that I curated with Karin Laansoo. What sets these shirts apart from the usual “promotional” T-shirt that you don’t even want to see after the event, is that I have managed to wear out the black lettering on the shirt into light gray. At first we gave every organizer a shirt, but then we were left with size XXL shirts that I took and DIY-d into various tank tops.

This particular shirt has seen all kinds of situations. I have worn it deliberately to occasions not entirely suitable to show my tongue-in-cheek sense of humour. However, I have also ended up wearing it to a family reunion where I was enjoying the traditional potato salad when distant relatives wanted to know: „What does the text on your shirt mean?“ Well, it could have been too out of context there.

If I let the level of wear and tear slide, then I still like to wear it on occasion, some less appropriate than others.

How do clothes find their way into your closet?

I have to admit that after moving back to Estonia I have been pretty much in limbo when it comes to buying clothes – I have minimized it almost to no buying at all.

Most of my clothes originate from London where I used to live or from various other travels. I prefer to buy clothes from abroad because there’s a much wider choice and the prices are also more reasonable (sorry, but I think local Estonian retailers offer too feminine ruffle-y confections for my tastes). I try to avoid high street and mostly wear vintage and local young designers. Japanese and Scandinavian design is quite appealing, but sadly on an Estonian art worker’s salary I could probably afford only a sleeve if even that.

How long do you usually use items of clothing?

Until I feel that it says something to me. I guess I might even contextualize the clothes I wear :).

How big is your wardrobe?

My closet is not that big, but my storage space is like a museum. People that have known me for a while know that I have been through a number of big transformations concerning style. This is why I don’t have too many items that have managed to linger on without criticism for more than five years.

In addition to all kinds of embarassing periods I have also had crazy phases as well as super boring ones. I guess I wanted to play different roles in my early 20s. Due to my moving around I have put some of my different periods in storage in my friends’ attics in various cities, but I have never really thrown anything away. However, I recently went through my wardrobe trying to keep only the things that I actually wear.

Maria Arusoo (b. 1983) is a curator and artist based in Tallinn. Arusoo is interested in new conceptual ideas produced by a different relationship between spectator and artwork. In particular, her works make references to the architectonic context and re-route spatial perceptions. As a curator Arusoo has made exhibitions and projects illuminating the relationship between art and power, concentrating on exploitation in art, through art, and around art. As an artist, Maria Arusoo works in the field of performance, film and installation where she explores the borders between physicality and perceptions. Since May 2012, she works as curator and executive manager at the Centre for Contemporary Arts, Estonia. www.arusoo.org