Wader mananged to chat with Brooklyn-based Prince Rama, a duo of sisters Taraka and Nimai Larson whose latest album Top 10 Hits of the End of the World, released by Animal Collective´s Paw Tracks imprint, has the duo performing as “10 different pop bands that died during the apocalypse, channeling the ghosts of each one to perform the various songs”. As part of their European tour, Prince Rama will be playing a gig on Tuesday in Tallinn, cinema Sõprus, where in addition to their live show their film Never Forever will be screened. 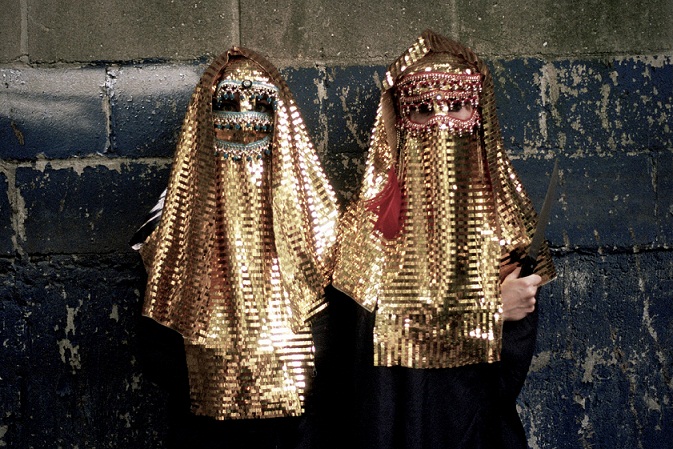 So far the only time I have managed to see you perform was at Schilling festival last summer where you ended up dancing ecstatically in the crowd. How did you like the festival?

Taraka Larson: Yeah! I loved it. It was so amazing. That was our first time ever in Estonia.

Nimai Larson: It was beautiful.

Did you get to see any bands yourself?

T. L.: Yeah, we saw Sean Nicholas Savage and a bunch of Estonian bands. I can not remember their names, but I remember being blown away.

Your musical concept lies on the principles of Now Age. Can you briefly explain what is Now Age?

Sitting in my room, interviewing you.

You recently published a Now Age manifesto which describes the basic ideas of your band. One of the points in your manifesto brings out the notion of Ghost Modernism which describes how “today’s sonic landscape is more and more haunted by the icons of the past so the music nowadays is a like a zombie that feeds on the relics of the past”. How can we come out of this state in your opinion? Do you think it is particularly a bad thing?

T. L.: You mean do I feel the ideas are not so original anymore?

T. L.: Yeah, I definitely feel that way, but there are two kinds of originals. If someone is making something that is close to the origin or inspired by the origin, that is original to me. There are things that are more universal, that get repeated time and time again, a same sort of love story or a hero story. Yes, they are repeated time and time again, but there is something so universal about it. You do not ever question is falling in love something that is overdone. Why should I fall in love because everyone has done this before? But you do not question it because it feels original every time. When you fall in love, it feels completely original, for the first time, every time. That is how I look at originals. I think there is an original in the sense of discovering some timeless source like falling in love. But the idea of Ghost Modernism is more like a recapitulation of phantom gestures. It is more zombiesque, like resurrecting the half-dead. That is not like falling in love, there is nothing universal about that. It is something that is taking a cliché or a kitsch and trying to recapitulate it again and again.

In your manifesto, you claim that symbols like cross and triangle have recently been widely used in the music scene which has stripped them from their symbolic power. Witch-house is the first genre that pops into my mind when I think of the overuse of these symbols. What do you think about this genre?

T. L.: That is a very classic example of kitschification of all these mystical and occult things. Honestly, I am not gonna criticize it. It is all just very fascinating to me. I feel it is like a term coined by a journalist. But if you take a step back, what are these words and witch-house anyway? All of a sudden it becomes Salem witch trials. If you are a girl playing synthesizers in a band, there’s a drum-machine and then it’s like, (imitates an accusing tone) “You’re a witch! You’re a witch!” People called us witch-house and we were like, “Why? Because we are girls and we play keyboards? Oh yeah, definitely, we are witch. It’s 1692, Salem Massachusetts all over again!” I really don’t even understand what that term is, but there sure are a lot of crosses and triangles going around.

On Top Ten Hits Of The End Of The World you have constructed ten different bands, each with its own crazy story and style. How did you come up with these bands and which one ended up being your favorite?

T. L.: Which one is our favorite? That is like asking from a mother which one is her favorite child. (laughs). But it was more like how did each band contact us, because it was really a channeling process. We completely succumbed to the throes of Ghost Modernism and opened ourselves up to become possessed by the past or future ghosts of pop music. We just wanted to see what would happen. The whole album came about so quickly. I was just riding my bike and suddenly got the exact song in my head. I was like, “Oh I have to turn around right now, go home and start playing keyboard.” We invented nothing about the song titles, the band names or the band photos. It all came very naturally. It was like, “Of course, this is the name of this band and this is what they wear.”

N. L.: There was a really large sense of immediacy. Taraka wrote the basic songs and I did the drum parts. So much came out in the recording process that we had not even learned yet while writing the songs. With every step of making that album, we learned more and more about these bands. Similarly, whenever we were taking photos of the bands, trying on different outfits and doing make-up, it was like we had an idea for what this band would look like and know when something was not right.

T. L.: There was like a voice telling us, “Take that off, do not look like that, what are you doing!”

Your album Architecture of Utopia is based on the paintings of Paul Laffoley and channeling ten different bands on Top Ten Hits Of The End Of The World is a totally new idea in the music scene. Have you already thought about some other crazy plan for your next album?

You have released a movie or a so-called Now Age psych opera “Never Forever” directed by Lily X. Wahrman, which will also be screened at Sõprus on Tuesday. How did you come up with the idea to make a movie?

T. L.: We just started throwing stuff out there because we had no idea that any of it would ever come true. As soon as we started filming it all came true, all of our wildest dreams and more. It was amazing, but we can not really take credit for it cause it was our friend Lily that directed it. She is a complete sorceress. I don’t know how she did it.

Your stage appearance is always very over the top and full of glitter. Is it somehow related to the idea of Now Age?

T. L.: Sure! I mean the idea with Now Age is that everything should be in this reciprocal process with whatever environment you are in. We are drawn to reflective materials like glitter, Mylar or sequence because they take the light in from the surroundings, reflect it back and create a sort of engaged dialogue. It creates a very active environment where you are a participant in your surroundings. When we put on a show, it is not just about sound. It is creating a vision of sounds and a look that beams out certain sounds.

Where do you get all those costumes?

T. L.: We have been really fortunate to have talented friends who design things for us. For example, some friends back in Brooklyn, fashion desginers that go under the name MOVES. Steffy (Stephanie Yarger- M.M.) who did all of the costume designs for “Never Forever”, has also done some outfits for us.

T. L.: My friend Julia Trinidad, too. She has also designed costumes for Shakespeare plays and movies. We are super super lucky.