Pussy Riot: “We are searching for stages which can cost us our freedom.”

Former members of Pussy Riot, Maria Aljohhina and Nadezhda Tolokonnikova, visited an annually held music industry conference and one of the biggest indoor festivals in the Baltic-Nordic region – Tallinn Music Week, and were interviewed by Russian journalist Artemyi Troitsky about how artists and music can stand against totalitarian rule. 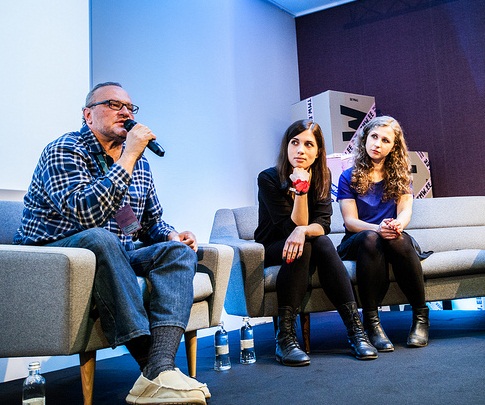 “This is not a secret that our music is not too good. The basic thing is that everyone would have access to it. We are searching for stages which can cost us our freedom,” explained Aljohhina and Tolokonnikova the story behind their concept.

When asked, have the topics they tackle changed since they came together in 2011, the women said their approach is still the same: “When Pussy Riot was formed, we immediately started making videos and statements in order to support political prisoners. Our goal is to create an alternative discourse to apathy and pessimism that back then dominated and still dominates in Russia. We can’t say that our views have changed.”

A matter how some people considered the idea of inviting the former members of Pussy Riot to Estonia as an anti-Russian posture was also discussed. “What we do is not anti-Russian, but actually pro-Russian. We visited Viru Prison in Tallinn yesterday. When we were leaving, some prisoners were playing basketball in the courtyard and they were starting to shout “hi!”. When we approached them, they asked why are we against Russia and we told that we are not against Russia. We are against Putin and this is something very important to understand. We really wouldn’t like that the citizens of other countries would associate our country with this man,” the band said.

The women also told a story about their experience during the Sochi Olympics when they were arrested for performing a song called “Putin Will Teach You How to Love the Motherland”. “The local policemen were really unhappy that the Olympic Games were held in Sochi and for the past four years their private normal life was really disrupted. Any experience at the police usually ended like this that when we were leaving the police station, the officers immediately started taking photos and selfies with us.”

When the women were asked about their reaction to what is going on in Ukraine at the moment, they answered: “These economic sanctions imposed on Russia right now will also affect ordinary Russians. Maybe it has come to a situation where the couch under many Russian has become too comfortable and something really shaky needs to happen for them to take it to the streets and express their opinion. ”