I have a pretty vague recollection of my first visit to an MC-battle in Von Krahl, but what I do remember is the sad and comical confession by Tartu MC s’Poom that one should not smoke a too big of a spliff before a battle. What’s left of this nightmare now is but a foggy moment in history, for me as well as for the then rather unknown MC. 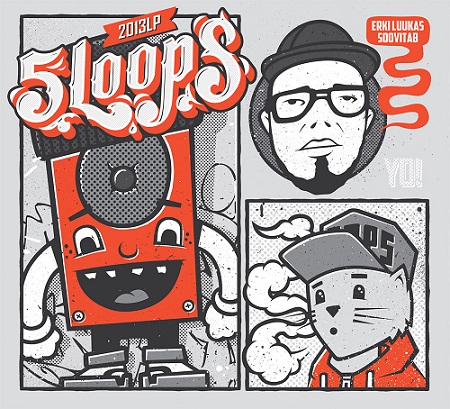 This is the second record in a row where s’Poom curates 5loops, blending together great Estonian hip-hop pieces. 2013LP is musically a real feel-good album with oldschool power and proves once again that home-grown hiphop hits hard and has stylish rhymes. The colourful palette of beats also features young producers Härra Kivi and Otto whose copy-paste draws on the influences of the golden oldies of hip-hop – DJ Premier, Pete Rock, Butterfly (Digable Planets) and The Bomb Squad (Public Enemy). Famous quotes from Estonian film and television classics add some additional cool. Is this becoming a tradition?

If our current governing body has come up with a few shortcomings in the field of integration, than in rap culture we’re still all one big close-knit family. It doesn’t matter if you’re from suburbs of the capital city or a small town burgess. You only need to cover the ears of the little ones when the receptionist at the doctor’s office is Oleg Kosjugin offering sharp greetings about what connects him to your mom.

What makes 2013LP more special than other hip-hop records with great beats and a good flow, is what’s outside the barrier of the CD-format – a plethora of eyecandy in the form of videos on YouTube. I don’t know how important an MC-battle trophy is for a rapper, but I would imagine years later a roomful of people appreciating your music is sufficient compensation. Great successes turn into great records, positive feedback and a warm embrace by fans.