Odd Hugo are on their European tour presenting their new album, by now they have been to Latvia, Hungary and Germany and the next stop in the summer heat will be in Vilnius. We talked to Rando and Oliver just before their album launch concert together with Frankie Animal – a band who have just released their very first music video for “Loveless Man” and with who we also had a chance to exchange thoughts. 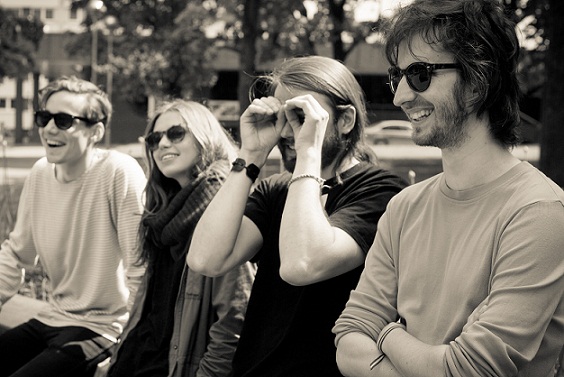 Prägnantne Brigaad was one of those bands that could just as well have played their first gigs without hitting any right notes with a relaxed gusto, but the the goodness of their music was clearly noticeable for the audience and their concerts were full of people enjoying themselves. Rando Kruus and Oliver Vare, who now make music under the name Odd Hugo, have recruited mechanical instruments and their own bodies as musical instruments in the service of the band with growing virtuosity, and performing their music on the LP „Odd Hugo“. The debut album initiates listeners with its vitality and magnificently sad slyness into a new world filled with singing, to the harsher side of ukulele, and brass instruments that sound as if they were played live, though actually recorded digitally.

Lively sound between the album covers

As it turns out during our conversation, maintaining the authenticity of sound and performance on the record, was one of their main goals when recording the first LP. The whole band drove to Türi for the recording process, which is known as a really sweet location for recording the drum parts. They chose to record all of their material in the Türi Cultural Centre which added an extra layer of space to the sound. “The sound of the instruments was really good there, especially what concerns the drums,” believes Rando. For example, Ewert & The Two Dragons, who recorded most of their material of “Good Man Down” at the same place, provided an example to go to Järva county in the first place. Although a room with a high ceiling alone is not enough to capture the live energy on a recording. “The most important thing is how you adapt yourself to actually playing to an empty auditorium. Just playing and nothing else.” Oliver adds: “The hall was on the top floor and the control room somewhere downstairs. Every time we went to listen to what we had recorded we ran down the stairs and if we decided to do another take, we ran back upstairs again – this kept the adrenaline up.”

Those who have heard “the oddhugos” perform, listened to their music online or read at least an extract from one of their interviews – oh, you know they are cool. What is evident on the new record, is that their laid-back attitude is slowly unfurling a distinct new sound in their music. This raises my next question for the two: what did they learn about themselves and their music during the process of making this record? Rando is the first to answer: “It is clear that we still have alot to learn and work on. We are in our early stages right now – though some things have worked out very well. We have an innate energy and sound – these are things that you can’t learn, they come naturally.” They do, however, sometimes feel that they might lack a bit in playing skills. “Seems that we are steadily growing into something distinctive, but we have the time and space to progress and it is good to know that we haven’t reached our limits yet!”

I don’t know how many bands have been absolutely satisfied with the final result after recording an album. The band’s manager Rein Kutsar was a lot of help when some recording bloopers needed smoothing. “He gave us his adequate opinion after every take – if something was good enough to go straight on the record or if we were asked to come and give a listen. That was the basic keyword. Some of the songs were recorded in one take – we just played them and that’s that,” Oliver says. The two songs that were captured on tape without any additional stitches were “Nothing Like You” and “X&Y”. Give the record a spin and decide if there is a difference between those and the other songs. By now, Odd Hugo has more songs than it was possible to fit on their debut album. The lion’s share of them were written during the last year or even more recently. The newest is “Song For Ashes” which according to Rando had only been performed live a few times as semi-finished before recording it.

Odd Hugo are peeking across the border

The collective born out of the sparks of these young men’s mutual love for music has now grown into a band touring Europe and getting international feedback. Rando: “I definitely don’t believe in serendipity and know that making a band involves a lot of work. There are a lot of people who have pushed and favoured us, as I have recently found out. The reason why we got three gigs during Tallinn Music Week was not a coincidence, it was all thanks to one particular person.”

Although Odd Hugo’s performance leaves a very homely and intimate feeling, it turns out that the fans abroad are even more keen on their music than here at home, and they even have fans on other continents. “We are thinking of going further from Estonia now. We have got very good contacts in Denmark, Finland, Latvia and Germany, and maybe even in the USA thanks to Tallinn Music Week,” Rando says. Oliver adds: “If we want to achieve something, we will definitely have to go to the USA to perform.”

“We have received a lot of support from our audience and we are very grateful to them,” Rando says. “Sincerely to everyone, except the one who shouted “Oh, Banderas!”,” Oliver laughs. The Tallinn Music Week showcases were what proved it is already realistic to start looking across the borders of Estonia. The manager’s part in securing gigs abroad is undoubtedly essential. Rein, the band’s manager, circling around the band members on his bike in Police Park in Tallinn, while talking about the role of the manager in the success stories of different bands: “You can make very good music, but if you don’t have a manager and you are writing music in your Tartu apartment and sharing a link with forty of your friends, then in the end they will be the only ones who hear it.”

Band formed with a manager

Odd Hugo was supported at their album launch parties by Frankie Animal – a band that was actually formed already with a manager. Singer Marie Vaigla laughs: “We sort of had a manager first and then the band. Peeter [Soovik] was involved with different bands and it somehow happened that we ended up under his wing too. We wouldn’t be anywhere without him.” The band’s guitarist Jonas Kaarnamets adds: “Without him we would probably be rehearsing only once a month.” After long days at school, the members practise till late hours – they say that they can sleep when they are old.

At Odd Hugo and Frankie Animal’s mutual concerts, the latter also presented their music video for “Loveless Man”. Winning the award as the favourite of Radio 2 at the Noortebänd competition came as a surprise, because they had only been playing together for a few months and they were not entirely ready for such success. “If you have already climbed somewhere, you don’t want to fall back down again,” Jonas says. Noortebänd was the first breeze to help them sail towards the music video. Choosing the song to get the visual was not that much of a dilemma: “My Friend”, “Loveless Man” and some unrecorded material were the only possible choices. “Loveless Man” had an existing storyline which sealed the deal. The film crew and band members were on the same page since day one and the crew were very professional, they came to Estonia from Ireland. The video was shot in a particularly comfy place – at Viimsi Open Air Museum – and they found a nice old man to play the main character “We had five pictures of different old men of whom to choose from. We all wanted the same one instantly, and he was just so nice – he told us all kinds of stories,” Jonas says.

As Marie said succinctly, Odd Hugo and Frankie Animal are rather different bands, but at the same time they also differ from other bands in Estonia. Warm and unpretentious attitude and great synergy between the members are what characterises both of these bands. Each performance is always a little more professional and mature, yet the musical sensibility remains fresh.