For a true music fan, summer isn’t really summer unless you’ve visited at least one music festival abroad. And that’s how the last few summers have been for me – I get tired of the homespun and start craving for something bigger with more interesting artists. And it wasn’t long before I heard about the first Secret Solstice Music Festival to take place in the musical Mecca of Iceland from June 20-22. Sunlit nights, Vikings, magical nature and 150 unique musicians all meant that I quickly found myself packing my bag and ready to head for Iceland. 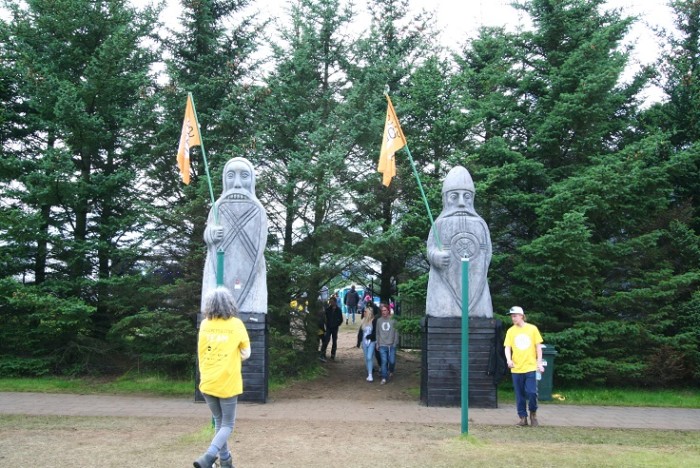 The (not so) Secret Solstice Music Festival was set up about a twenty-minute walk from downtown Reykjavík. Two side by side football stadiums held the main stage (Valhalla) and two smaller outdoor stages (Gimli and Embla) with the dance tent (Askur) between them and the nightclub/nightly rave marathon venue (Hel) in the ice rink next door. As the names indicate, the theme of the festival revolved around the Vikings, their pagan sagas and the symbolism involved. Even as guests walked through the gates, they were greeted by tall, upright Viking gentlemen who lorded high above and kept their stern eyes on the goings-on.

As we know, everything is very expensive in Iceland, especially alcohol, so it was a welcome change to see the public full of young people brought there by their earnest interest in music. The frequency of British accents heard made it seem as though there was a special flight running between Great Britain and Iceland just for the festival. Fortunately, there were enough people sipping from horns and wearing folksy sweaters to know that local festivalgoers were in attendance as well. The pleasantly peaceful and chill atmosphere of the event attracted a surprisingly large number of children as well and it became a regular occurrence to see young fathers slowly rocking their hammocked offspring to sleep to the beat of the music. Another mark of quality can be found in the fact that Icelandic musicians not performing in this festival were there to partake of the event happening in their own back yards. And thus, we got to dance like crazy next to Ólafur Arnalds and get a peek at Björk from across festival grounds. 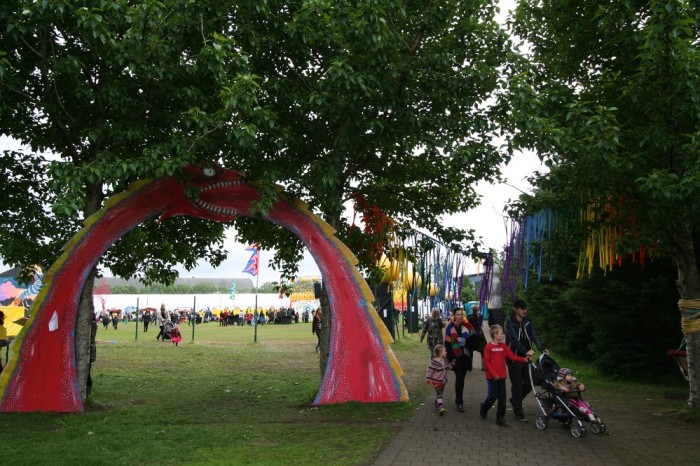 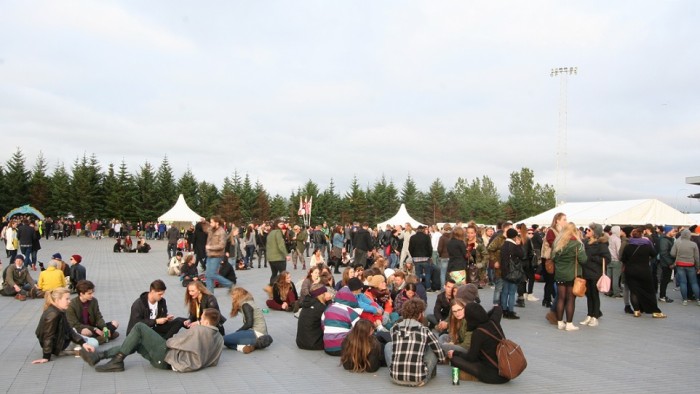 But now to the main topic, music. As festival Fridays tend to go, the public was rather sparse until the evening performance by Woodkid, which brought a decent crowd to the main stage. The French musician and multitalented Woodkid showed fans what he does best with a powerful live performance. In addition to electronics, an army of drums thundered and woodwinds blew on stage. There was an attempt to visualize the richness of the sound on the screen at the back of the stage, but since the sun never sets during the solstice, not much of the visuals were visible. But this small detail didn’t deter the audience from loudly cheering along to the show.

The second Friday night headliner was the British DJ duo Disclosure who played fast-paced garage-house with the public dancing like mad. It seemed like the never-setting solstice sun was news to the Brits because some time around 11 p.m., the DJ shouted from the stage “Look, it’s still light out!” When the main stage performers were done, the audience was nice and warmed-up so they headed to Hel, i.e. the large ice rink, where they boogied to the beats of different DJ-s until five in the morning.

Saturday was a main stage day with the program including everything from two anticipated Icelandic indie artists to Banks and Massive Attack in the evening. Walking towards Valhalla, I was enthralled by the dreamlike, electronic ballads coming from the stage – Vök was performing. With its calm, peaceful, clean soundscape, this band immediately won my heart and moving anywhere from the front of the stage never once crossed my mind during their set. 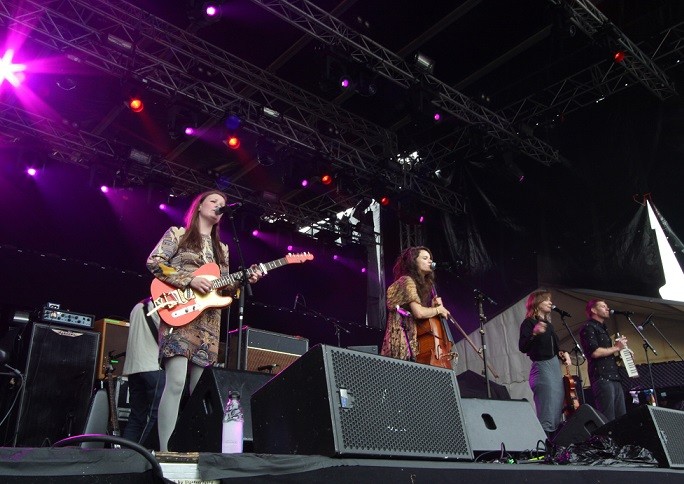 Next, I expected to hear the long-awaited Icelandic indie-rock collective Mammút but in their stead, three young ladies took the stage to play something that sounded very much like house music – they were Sísý Ey. After a small bit of confusion, the festival lineup was restored and Mammút arrived on stage with different instruments to play their best songs. The elfin-voiced Disa also gave an interesting live performance in which her melodic pop sound drew everyone’s eyes to the stage. And the band that’s been around since 1997, múm, gave a typically great show that also included a cello and a violin. Again, an arresting performance.

It may have been starting to feel like it couldn’t get any better than this, but then Banks took the stage. Dressed in raven-black and moving like a bird, this woman was capable of charming the sun out from behind the clouds. The Banks live show can only be described by the word jitters, that’s how clear and powerful the performance was. But the highlight of the day was still Massive Attack. They turned the amps to the max and made the ground rumble as if another Icelandic volcano was about to burst. The dull electronic notes gripped the public and took them along until everyone was dancing, big and small. The situation neared ecstasy when familiar songs like “Teardrop”, “Angel” and “Unfinished Sympathy” came on. The light clouds in the sky worked to Massive Attack’s advantage as their live show was illustrated by visuals carrying anti-war and anti-social media messages. When Massive Attack finished, the crowd once again moved on to the Hel nightclub where Jamie Jones pulled it along and right up till five in the morning. 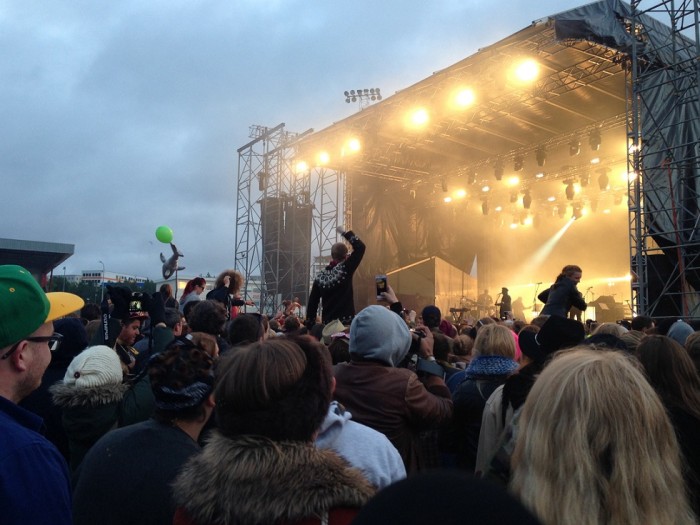 The Sunday main stage program mostly focused on hip hop, which gave me the chance to explore some of the other stages at the festival. My favorite became the one called Gimli where a very colorful group of artists performed. For example, the cuteness factor reached an all-time high when the DJ duo Tanya & Marlon invited a 10-year-old fan on stage during their set and the kid played along with them until the very end. The electro-pop duo Sometime moved the crowds with a mellow dance vibe. Meanwhile, on the main stage, a tribute band consisting of Icelandic instrumentalists played homage to the departed hip hop producer J Dilla. Anyone whose legs still carried them was treated to the swinging sounds of some British multi-instrumentalists dressed in court jester costumes and carrying the name Rum Buffalo. The Sunday headliner was the American artist Schoolboy Q, whose mainly old-school gangsta rap brought a sea of arms to the front of the stage. The festival ended in the hellishly named Hel nightclub where the king of house, Kerri Chandler, spun some records. 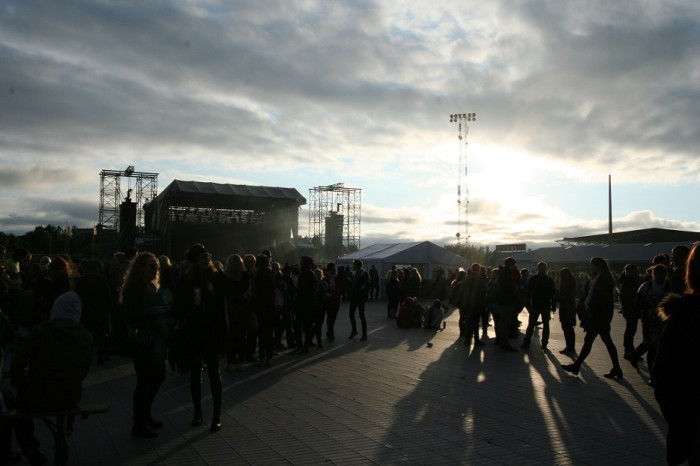 To conclude, the legend that there are more bands than families in Iceland must ring true. How else could the organizers fill five stages and three days with unique and mostly Icelandic artists? And, thus, the Secret Solstice Music Festival ended up defying expectations in size, quality and variety. For a first-time festival, there were surprisingly few glitches, for which the organizers deserve a deep bow.