Temples and the psychedelic mind

It was in the mid-1960s when The Beatles, The Byrds and The Yardbirds sparked a sound that soon became known as psychedelic rock ‒ music genre that drew its inspiration from the hazy and colorful trips to the “island of psychedelic drugs” and transformed these experiences into sound that enjoyed its peak from 1967 to 1969 along with the Summer of Love and Woodstock. After its decline by the end of the 60s, psychedelic rock saw its reincarnation in the shape of such acts as My Bloody Valentine, The Brian Jonestown Massacre, Echo and the Bunnymen and many others. In 2008, the first Austin Psych Fest was held, in 2012, Tame Impala released its album Lonerism, and in 2013, psychedelic rock, or the so-called neo-psychedelia, was suddenly everywhere. One of the most successful revivalists from that period is Temples, a four-piece band from Kettering, UK who started out in 2012 and released their debut album Sun Structures in February this year. As Temples will be performing at this year’s Positivus festival held in Salacgrīva, Latvia from 18th to 20th July, Wader had a chance to ask the band a few questions which, though, got a few laconic answers. 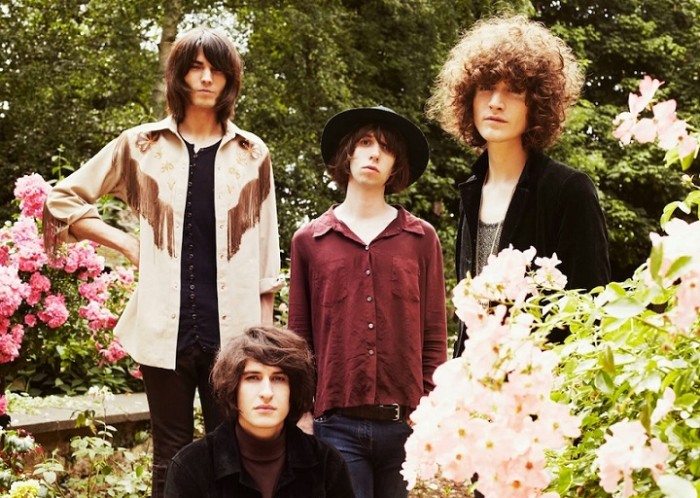 You were part of rivaling bands in Kettering. When and how did you decide to form a completely new group altogether?

It was over the course of many years. All four of us were friends before we started with Temples. We’d all moved away to different places, so it was a pure coincidence that we’d all returned home basically at the same time and finally decided to make Temples a band.

You have gained a lot of attention since your formation in 2012 and have been cited as the best new band in Britain by Noel Gallagher and Johnny Marr. How does that make you feel when musicians of this calibre put you on a pedestal like this?

We’re still a fairly new band ‒ I suppose we’ve not really ever felt a responsibility to live up to either. It’s great if people like our music, but it’s also important for every band to stay true to themselves.

Many artists have got loads of inspiration from living in small places like Kettering, Forest Swords for example, who recorded his entire album at his home region of the Wirral. Has Kettering somehow put some specific stamp on your music?

Not especially, other than its quiet enough to allow you to reflect on everything and completely focus on the music. It’s surrounded by countryside.

“Psychedelic” is the word that most often arises when reading about your music or listening to it. What things and artists have influenced you?

There’s a great heritage of psych bands, and some of the finest pop music is in that category. We always drew attention to detail in those records, it’s definitely something we also consider in our music. People as prolific as Floyd are a huge inspiration, but then oddball one-off singles like “Man of Straw” by John Wonderling or “Glastonbury” by The People are just as influential.

You didn’t work with a producer on Sun Structures. How did the process of recording work out? Did you have loads of quarrels too?

Most of it happened without saying anything. You have to be a strong judge of your own music, which is at times fairly difficult, so you end up blindly going into every track hoping it’ll work out okay. Once we had finished about 5 tracks your confidence grows in what you’re working towards.

You have been touring quite a lot now. Do have any weird stories of the times on the road?

Touring is weird in general, reality is suspended.

What’s up next for Temples? Are you already recording some new stuff and since you released a hugely critically acclaimed album, do you have some kind of a sophomore album pressure too?

Since we began Temples we were always working towards a bigger picture and an album, so for the first time as a band, since Sun Structures came out, we’ve been able to just enjoy playing music. We’ll continue touring for most of the summer, but we’re looking forward to getting back in the studio in autumn.