One of the main acts of this year’s Schilling festival, Swedish indie-pop collective The Mary Onettes has gone through a pretty rough road since their formation in 2000 to that something which can be called success. Their record deal was dropped, their new album material was stolen and they sure know what it feels like when your hard drive decides to collapse and desert all the information stored on it. Despite all that, The Mary Onettes has become one of the most charming sounds on the Swedish indie scene, mixing together dark lyrics, sparkling sounds and 80s. We met up Philip Ekström, Henrik Ekström, Petter Agurén and Simon Fransson at Schilling and discussed their last album, the importance of melancholy and the difficulties of working with a producer.

You have given quite a lot of concerts this year. How has the tour been so far?

Philip Ekström: We have not played as much as we used to, but we have been to Spain, we had a tour in Germany and now we are here. We haven’t done any festivals yet, only club shows.

How do you feel the people have received your new album “Hit The Waves”?

P.E.: Quite good, I think. A lot of people were probably surprised by how we sound. But overall, I think people like it. At least I hope so.

Your new album is probably lyrically the darkest so far and, Philip, you have mentioned that melancholy gives you strength to write music. What do you think, would you even write music if you did not have this so-called melancholic zone to inspire you?

P.E.: Probably I would have other things to occupy my life. Music is about expressing what you feel and melancholy is a huge part of my life. It always has been. It is an important ingredient in the music, I guess. I don’t know about the other guys. What they feel or what they think.

What topics do you tackle on “Hit The Waves”?

P.E.: I write the lyrics so it is always very personal. I think the new album is a lot about people and how you act with them. How you express yourself amongst others. Like social waves.

What do you mean by social waves?

P.E.: It means how you connect with others. I have always had a feeling that it is a bit hard to connect with people. Maybe I have a very Swedish way of seeing things. Many of the songs are just some kind of output of the moment, so when I write them I really don’t have a plan what they are going to be about. They are like an output of feelings.

You also have nature theme in many of your songs.

P.E.: It is not very intentional. It just came with the songs. The nature is a really nice thing to connect to your lyrics, especially metaphorically, which works very well, I think.

Petter Agurén: Almost all of our album artworks have been connected with nature somehow. This started with the first album and we continued to use it because nature seemed to fit with the music.

P.E.: There is something very epic and eternal in nature and that is what we also want to express in our music. 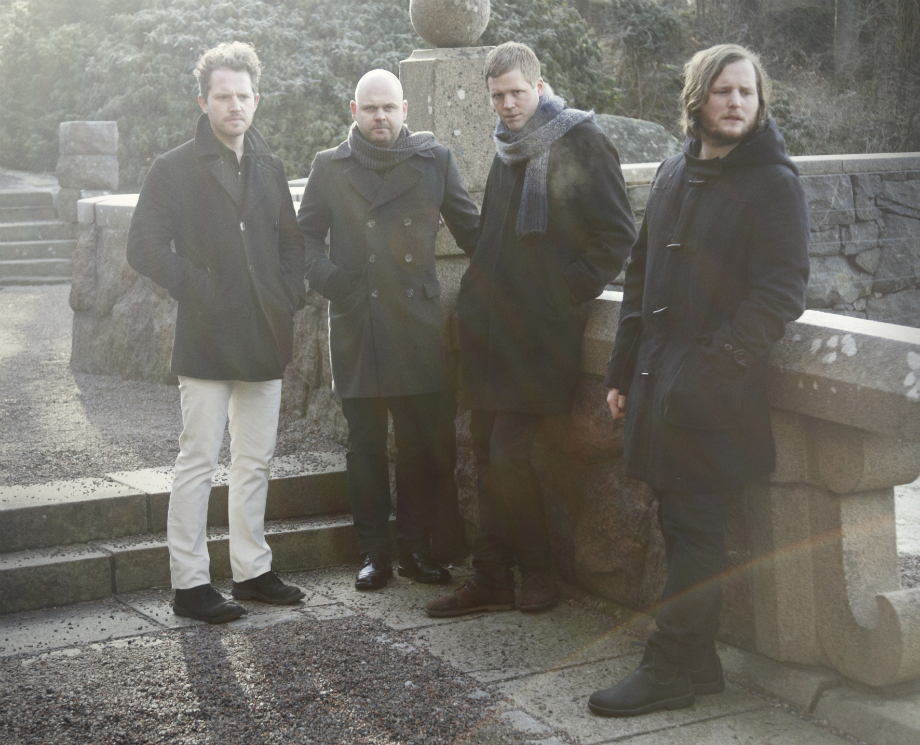 Philip wrote your previous album “Islands” in complete isolation. Was there a need to write “Hit The Waves” in some different environment, too?

Henrik Ekström: Maybe not writing it, but recording it was different. We moved between different studios and did sessions.

P.E.: We also worked with a producer, which was totally new for us, because we had to work together with someone outside the band. That was really hard.

In case of “Islands” Philip’s hard drive crashed, so you basically had to record all of the material from the start. Has it made you a bit obsessive-compulsive when you are recording anything now?

P.E.: The fact we had a producer made things much easier, because I didn’t have to handle the audio files myself, but send them to him all the time. He was a little bit like the end station of our project and that was very good.

You had a lot of indifferences with your producer Dan Lissvik when you were making this record.

P.E.: When I look back at this process, I feel that maybe he wasn’t the guy who was having a problem with co-operating. Maybe it was us, maybe both. Making a good album is a very sensitive process, you know.

How is working with a producer anyway? How much did he listen to your ideas?

P.A.: He was very persistent. We had decided from the beginning that we are going to listen to his ideas as well. That was the main idea for bringing in an outside producer – to have someone to clash against.

H.E.: And we managed to clash.

You still get along with him though?

P.E.: Yes. I think it was very good to just throw yourself into something unknown. We didn’t want to make an album that we had done before. We wanted to make something different and in order to do that we had to sacrifice certain things.

How has your sound changed since you had a producer involved?

P.A.: He (Dan Lissvik- M.M.) likes very rhythmic stuff. Percussioning. I think this album is more rhythmic than we have had before.

H.E.: I think it is still a very typical Mary Onettes album. I think there is more air in the songs and it is a bit more shiny. You can breathe more when you listen to it.

P.A.: This time it is more dynamic.

P.E.: It is a natural direction for us.

P.A.: We have learned a lot from this process.

Are you satisfied with the outcome of this co-operation?

P.E.: We are now. It took a lot of time and it is only afterwards you realise it was worth all this struggle.

Did you have a time limit for recording this album?

P.E.: In the beginning we had a very tight time limit, but at some point the producer said: “Alright, this is going to take a bit longer then we thought.” We kind of gave up on the way and started again.

Does the time limit somehow influence your creative process?

H.E.: When making an album, I think it is a good thing to give up, take a step back, listen to what you have already done and get back to it again. To know what you have to do next. We had always made our albums for a very long time, but now we had a time limit and we were not that comfortable with it. It was really stressful. That is why we gave up and then got back to it.

P.A.: It was the first time we had to pay someone working for us. Someone was actually employed by The Mary Onettes. That was a stress factor as well.

P.E.: It was quite a lot of money, actually. This time we had this album financed by the goverment who put in a lot of money. We got a grant for the first time.

H.E.: We haven’t had a budget for making an album before.

Have you tried getting money from the government before?

P.A.: I think our label has given in applications with the previous albums and never got it, but this time they somehow decided to support us.

Do you read the reviews when your new albums come out?

Simon Fransson: We say we don’t, but…

P.A.: I think everyone who says they don’t read them is lying.

Have the reviews been mostly positive or negative?

P.A.: Mostly positive. It is always good to have a bad review as well.

P.E: We are a little bit spoiled, at least in Sweden. I would like to think that our music is more genuine than albums produced for radio.

P.A.: In Sweden, there are artists that always get really good reviews. That is because they are doing very good work.

P.E.: If you do good stuff you deserve good criticism.

Could you name some bands from Sweden that you really like?

P.E.: Silverbullit is a good band. It is one of the bands that always gets good reviews. They have done pretty brilliant stuff.

How do you see the indie music scene in Sweden at the moment?

P.E.: I think it is standing still. Really. I think the labels don’t know what kind of music they want to push forward. Bands always pop up, but they always die in a very short time and then you don’t hear from them again. I think the Swedish indie scene was very vivid for a couple of years. Even many years. It goes up and down.

P.A.: We have one or two acts every year who are pretty successful abroad as well. A band called Icona Pop for example. I think they are nice.

In case of “Islands” you recorded your string parts in churches and used a children choir in some of your songs. Have you done something similar this time?

H.E.: We also have a children choir on “Hit The Waves”.

P.E.: There are a lot of details in the songs. All kinds of strange things happening. I can’t even remember all of the instruments that we used. Falling chains or banging on the table, for example.

P.A.: What we don’t have on this record is live strings. We had a lot of string arrangements on the first albums, but now there are probably more synthesizers.

P.E.: But I don’t really see this album as a synth-pop album.

P.A.: Synths are more subtle and laid-back. Like more in the background.

H.E.: There are lot of moods. Like setting a right mood for each song.

The most frequent bands that have been mentioned as your influences are The Stones Roses and The Cure. What do you listen to the most nowadays?

H.E.: Not much Stone Roses and The Cure, but it happens.

P.A.: I think that is something that got stuck with the first album. It was on our press release. We haven’t talked about these bands for five years, but if someone finds it in Wikipedia it tends to come up. It is okay, though. They are good bands.

P.A.: We are all very different individuals and we all listen to our own stuff. Maybe we have some bands in common. You get influenced by everything.

Philip and Henrik, you also have a band called Det Vackra Livet. Are you still keeping it alive?

H.E.: We have talked about doing another album, but maybe with a different name. We don’t know.

The Mary Onettes and Det Vackra Livet sound pretty similar. Why the need to form one more band?

P.E.: At that time when we started Det Vackra Livet we had a break with The Mary Onettes. I started doing music in Swedish and this is a big difference, but we didn’t have a particular need for a new band.

I read that Philip and Henrik started making music when they were some 12-13 years old in bands such as The Beerbellys and Young Boyz. How did you all get to playing music in the first place?

P.E.: Where did you find this information?

H.E.: The Beerbellys was a punk band. It was like just screaming and playing the crap out of the instruments in our basement. The thing was that no one could play any instruments at all. The first thing was to learn an instrument and see what you like the most.

P.A.: When you have a guitar standing in the corner for ten years you sooner or later take it up. I played cornet for a while, but it didn’t do anything for me.

H.E.: You have a lot of time when you grow up – at the age between 11 and 16. You have this dream to be a rockstar and this goal to push towards to.