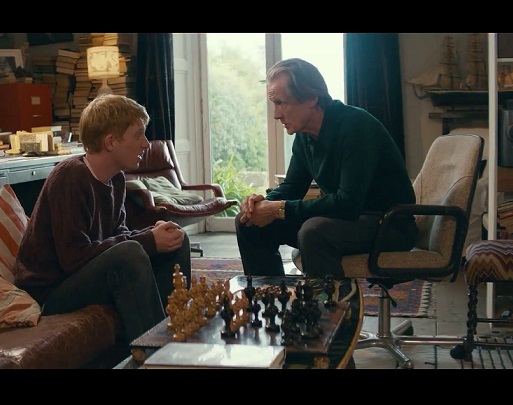 “About Time” stars Domhnall Gleeson as Tim, a socially awkward young adult who finds out he can travel in time (inside his own timeline) and decides to use his powers to find love. The target of his pursuits is the also somewhat awkward Mary (Rachel McAdams). There are definitely some questions regarding the specific mechanics of time travel, however, it is not a big issue, since this is a romantic comedy with elements of time travel and not a sci-fi film about time travel. The key plot element seems to be the sort of self-induced “Groundhog Day” with Tim’s repeated attempts to make Mary fall in love with him. Surprisingly, time travel does not actually happen that often. In the second half of the film it is only used two or three times.

This is a romantic comedy, meaning it has to tick two very important boxes: romance and comedy. There is definitely chemistry between the leads. Tim and Mary are very similar: they are both a bit socially awkward, shy, but also very witty. The dialogue between them highlights their similarities and feels very real. Romance: check. The dialogue is overall fantastic, laced with British dry wit. Contributing greatly to the comedy are the supporting characters surrounding Tim and Mary, like Tim’s quirky free-spirited sister or his bitter playwright landlord. The scenes between Tim and his father (Bill Nighy) are some of the best in the film. Every character is unique and quirky almost to a fault. Comedy: check.

However, the movie fails in plot and plot structure, which is rather unfortunate, considering the interesting concept. A tried and true format for films is to have a tense conflict that the protagonist tries to solve throughout the film despite the many obstacles thrown in his way. This keeps the audience invested in every scene. This film does not do that, but rather it is an episodic series of minor conflicts. The pattern is: a scene or two introducing the conflict, then a scene resolving the conflict, and then a scene or two of Tim and Mary just being in love. And repeat. The conflicts rarely revolve around their relationship. Be it good or not, but here we do not have the formulaic romantic comedy structure and on paper this format actually makes sense in keeping with the themes of the film – living life and appreciating its ups and downs. But this does not translate onto the screen very well. The lack of central tension results in boredom. Also, it means there isn’t much of depth to the character of Tim. Therefore, when the movie ends, it just sort of happens.

Speaking of the ending, the similarities between this film and Richard Curtis’ previous success “Love Actually” (2003) are very noticeable. Firstly, the ending of “About Time” is stylistically identical to the opening of “Love Actually”, complete with a disembodied voice talking about life and love over shots of random residences of London. The plot’s misgivings can also be traced back to the 2003 film. “Love Actually” is an ensemble comedy with each character having their own conflict and resolution. The lack of one central conflict works in that film, because there is also no central protagonist. “About Time”, on the other hand, is a single protagonist film with a multi-protagonist structure.

Overall, the film is enjoyable despite its shortcomings. There are plenty of embarrassing and hilarious situations that Tim finds himself in. As for those looking for romance – Tim and Mary’s relationship is exactly what you want. But with a better structure to the plot and better use of the under-utilized time travel aspect, the film could have been so much more. 6/10