Theodore Spyropoulos who gave a talk as the keynote speaker to the conference “Art and Science – Hybrid Art and Interdisciplinary Research”, organised by the Estonian Academy of Arts in the end of May, is an architect and educator. He is the Director of the Architectural Association’s (AA) world renowned Design Research Lab (DRL) in London. He has been a visiting research fellow at MIT’s Center for Advanced Visual Studies working with the Interrogative Design Group and co-founded the New Media Research Initiative at the Architectural Association. He has taught in the graduate school of the University of Pennsylvania and the Royal College of Art, Innovation Design Engineering Department. Spyropoulos directs the experimental architecture and design practice Minimaforms with his brother Stephen Spyropoulos. The work of Minimaforms has been acquired by the FRAC Centre (France), the Signum Foundation (Poland) and the Archigram Archive (UK), and has exhibited at the Musueum of Modern Art in New York, Barbican Centre (London), Detroit Institute of Arts, ICA (London), Futura Gallery (Prague), Slovak National Gallery (Bratislava), and Architecture Foundation (UK), amongst others. Spyropoulos has previously worked as a project architect for the offices of Peter Eisenman and Zaha Hadid Architects. He studied at the AA, Bartlett School of Architecture and the New Jersey Institute of Technology. Minimaforms presents its “Petting Zoo” project at the Barbican Centre in London, in an upcoming exhibition “Digital Revolution” which opens on July 3 and runs until September 14. 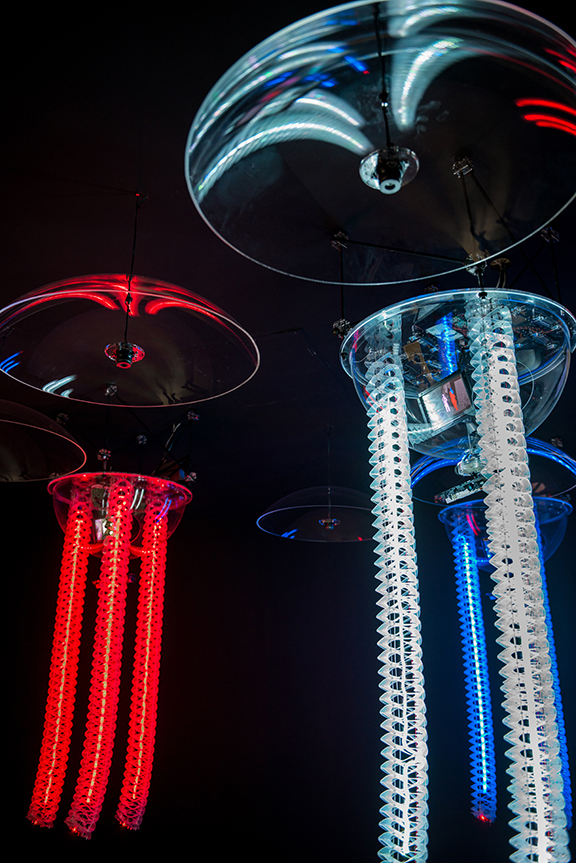 "Petting Zoo" by Theodore and Stephen Spyropoulos that will be shown at London's Barbican Centre as part of their upcoming show "Digital Revolution". Photo: Minimaforms.

How is new knowledge created through the collaboration forms of art and science? How to expand the dialogue between science and art and how could artists and architects position themselves in this process?

We fully embrace pursuits at the crossroads of art and science. This dialogue along with our communication revolution has afforded a new knowledge that is accessible and has evolved what was desired in periods of open experimentation such as the late 1950’s–70s. Computation allows us to explore complex relationships in biology and physics. These relations afford us the opportunity to construct design environments and behaviors that articulate and engage these as active time based drivers, informing ways of thinking about how true forms of interaction, social interaction and human agency could participate actively in a much larger project. “The Project” of today does not necessarily make any disciplinary distinctions but sets certain frameworks of reference. I have always been influenced by late 1960s and early 1970s work, initiatives like experiments in art and technology – for example by Billy Klüver and Robert Rauschenberg, also explorations undertaken by György Kepes at the MIT and Nicholas Negroponte working through thought experiments and issues of technology without having a very prescriptive or finite way of addressing some of those subjects but in a sense of discovery.

How to overcome the difficulties in understanding one another when we come from different disciplines such as art, design, natural sciences, engineering, technology and use a different vocabulary?

I see many people being like-minded or having a certain synergy but they often do not know how to creatively come together. In that sense such conversations are meaningful to those practitioners who do not sit comfortably within their disciplinary boundaries. It is about asking more informed questions and looking not at the different specialties of those different disciplines but at the contribution of those disciplines to a project that makes demands that by necessity are interdisciplinary.

Have you consciously positioned yourself as an architect within such conversations?

The context of an architect is always an open one. I see it much more as a speculative framework for approaching problems in a particular way without the necessity of it being strictly about buildings. Instead, it is more about conceptually framing way of understanding, thereupon enabling a certain form of conversation. Computation and other forms of communication enable us to make the terms that we use more tangible. I work in the fields of design, art and architecture but the implications of some of the things that we are doing – either through material practice or through forms of communication – by their very nature might not lay in the domain of an architect. This is when things become exciting for us.

You have stressed that all over the world, cities are emerging in the kind of time frame that buildings are usually developed in, and outdated practices dictate that these cities are generic, unable to adapt to the ever-changing needs of the built environment. That is why architecture is being forced to radically refactor its response to new social and cultural challenges. How is your work at Minimaforms responding to the increasing demand for adaptive models for living?

People that I reference quite a lot in our work – for example Gordon Pask – were trying to articulate a systemic approach for architects due to the evolving nature and complex problems that they were addressing. The scale of the cities and accelerated time frame are our basic constraints we have to deal with and challenge. We do not believe in the fixed and finite, rather see the world as an adaptive ecology that is dynamic and evolving. We look at processes that are time-based and that deal with latency and uncertainty. My approach is a systemic one that does not aim at finite control, but rather a form of interaction and in-betweenness that is time-based and generative constructing collective frameworks and spatial strategies. To me, it is about enabling a much more participatory and engaged relationship, thinking more collectively, finding mechanisms to conceptualise and to apply new forms of production and materiality.

Is there a difference what you are able to explore through your own practice Minimaforms and what you leave up to your students at the AA?

My work with Stephen and my colleagues at Minimaforms along with my teaching at the DRL have evolved in a symbiotic manner. Our approach to design has always explored frameworks to collectively explore more conceptual and speculative problems – we have sensitivity towards behavioural models of interaction and materiality that we have been working through now over ten years. Over this period our work has evolved and through our commitment to education in parallel it has continued an evolving experiment. We believe in fostering a community, as for us design is a shared and collective pursuit. With my students at the DRL it is important for me that they construct their own path. My students are not passive observers but active participants. A lot of the research that we have been developing with my students is about systems that are self-aware and have the capacity to self-structure, to be mobile, rethinking certain attitudes towards robotics, rethinking the approach which separates architecture and infrastructure, looking at different forms of ecology.

According to Roy Ascott’s manifesto from 1967, Behaviourables and Futuribles, “Process replaces product in importance, just as system supersedes structure.” This also seems to be one of the lines of thought brought forward in your approach to research, for example in what you pursue at the AA DRL?

I have a certain affinity to that period which articulated for us how we look at the relationship between art, science, design and technology. It was a very open way of thinking about practice – bringing a certain approach and sensibility to think creatively about what are the fundamental issues at hand and how we could explore them, make them accessible to people. I like it when architecture, design and science open up to this idea of “process” and enable the everyday to actively engage with and participate in the project. We have the responsibility towards the much larger cultural conversation that needs to be somehow informed about things that are actually happening and are not just mediated.

From your fellow contemporary peers and colleagues – with whom do you have affinity for? There are Philip Beesley in Canada, Jenny Sabin in the US, Achim Menges in Germany among many others that seem to pursue quite similar paths as you do?

I have a great deal of respect for some of the research done at SCI-Arc, ETH, Harvard, MIT and yes some of it is similar to what we do at the AADRL where I have been teaching for past 12 years. I am interested in the differences between the approaches that allows for meaningful diversity to evolve the conversation through design. The novelty aspect of “the digital” and working with new tools is over. This is important as a greater engagement in the younger generation of designers is emerging with fellow contemporaries examining the crossroads between biology, physics, and the artistic practice and design. We explore “behavioural formations” as a strategy of working through behavioural complexities of social and material forms of interaction. The project of behaviour is really the one that focuses on issues that deal with social interaction and communication as well as with the material form, formation and material forms of life cycle. These are design constraints and contingencies that impact how we can construct an environment. And here, I would substitute the word “environment” with “architecture”.

You have emphasised that design should be progressive and challenge people. What do you mean by this?

By “progressive” I mean design that is responding to the issues of today – thinking about a future scenario. I have a very particular attitude towards the future, maybe partly influenced by people like Marshall McLuhan. Paraphrasing, he said that when you are interested in the future, look to the present, because we live in the past. Progress for me is about enabling in particular the practice of architecture to evolve, to actively participate in ongoing issues. Architecture for me does not have a finite definition – it is an environment for intellectual and spatial interrogation. We have to situate and contextualise our ability to define, communicate and make accessible. Design, in all forms of creative practice, has to be dynamic and evolving, to deal with ways of addressing time, latency and uncertainty.

The interview was published in an abbreviated version in Sirp on May 30, 2014.