The past decade has been characterized by a boom of urbanism. Buzzwords, such as ‘grass-root urban initiatives’, ‘participation’ and ‘creative districts’ have become hip, actual and important. Berlin is still often cited as an example of being cool, creative and livable – as if Berlin was implementing the heritage of Jane Jacobs directly in its urban development strategies.

The article by landscape architect and a PhD candidate at Estonian University of Life Sciences, Jekaterina Balicka, was first published by the Estonian Urbanists’ Review U : www.urban.ee.

The city profits from its low-budget coolness – the mayor of Berlin, Klaus Wowereit (2001–), has stated, that ‘Berlin is poor, but sexy’, attracting people from different parts of Germany and other parts of the world, for both short stays or longterm living. The object of touristic interest over the past decade was not only its architecture and museums, but its quality of life: its freedom, its uncertainty. There remains an idea of Berlin being cool, an example of which could be eating a kebab under a scaffold, with people passing by just next to you; or watching a Karaoke event at Mauerpark after some flea market shopping; or taking a picture in a retro photo booth next to the S-Bahn station Warschauer Straße; or standing in the long queue to get through the facecontrol at the legendary Berghain club, or any other scenes of the easyJet influenced touristic Berlin-idyll of the years 2006–2010. 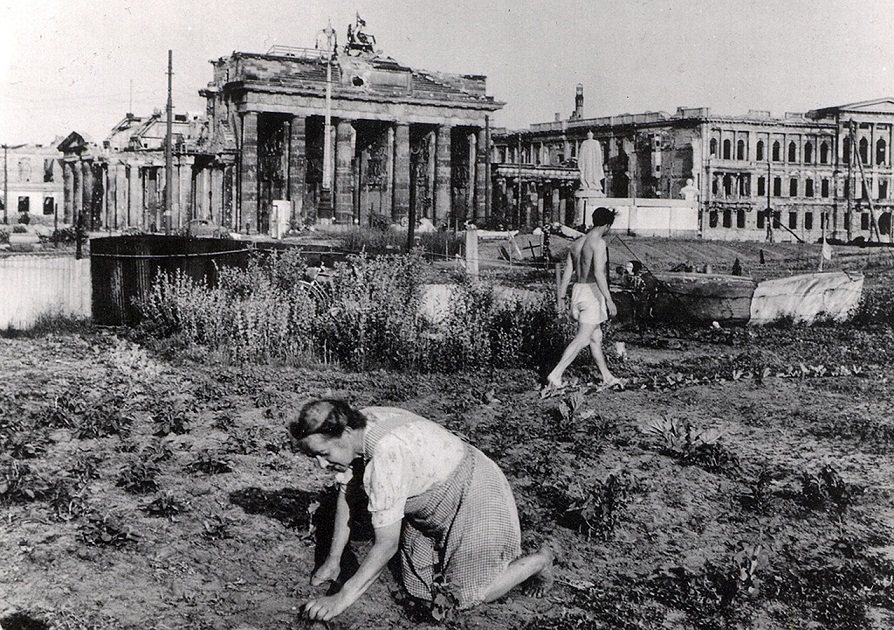 Life in Berlin is celebrated because it fits to the Zeitgeist of the recent time. Things often associated with Berlin are squatters, the lo-fi artscene, clubs and temporary use projects – Zwischennutzung. Philipp Oswald in his book ’Berlin – Stadt ohne Form: Strategien einer anderen Architektur’ describes the city as the ‘urban research laboratory of the residual’. This describes very well the nature of Berlin with about 3,5 million inhabitants and its very different districts – Kiez, where the ‘coolness’ has been changing in time – Charlottenburg being hip in the late 60’s, Schöneberg in the 70’s, high-lighted by David Bowie, Kreuzberg, starting with the squatting in the 80’s; Prenzlauer Berg from the early 90’s until beginning of 2000s; then Kreuzberg again and Friedrichshain; and recently Neukölln. Inhabitants of Berlin chose their home district, according to rent they could afford and their individual view on the quality of life and lifestyle.

The development of Berlin as we know it ‘started’ after WWII had destroyed a significant part of the built-up areas and perforated the urban structure. After the division of the city in 1945, many industries were moved to the south of Western Germany and the deindustrialisation of West Berlin started. When the capital of the new-founded FRG was established in Bonn, West Berlin became an enclave, surrounded by the wall. East Berlin in contrast became the representative capital of the GDR for 40 years.

The excess of vacant space, which over-exceeded the demand, was the reason for the relatively low rents and catalysed the development of subcultures. Due to the ‘inward periphery’ – empty, unused areas within the city, its specific perforated structure – Berlin was the It-location for ‘creative districts‘ for many decades, starting in the late 60s. The creative boom migrated from one district to the next, depending on the economic, political and cultural circumstances of the decade. In that sense, development of districts can be compared to the process of natural succession, starting with the first habitants, who detect the undiscovered opportunities of the vacant space, but are also the only ones, who are able to survive and ‘profit’ in rough conditions. This phase is followed by the arrival of other ‘species’, able to settle only on already prepared ground. This is the moment, when the area becomes cool, the soil becomes more fertile, that in terms of urban studies the gentrification process starts.

Temporary uses emerge from the same premises as other cultural movements in Berlin mentioned above. Contrary to common oppinion, it is also not a concept originating from the last two decades – an axiomatic example of temporary use in Berlin is the establishment of the allotment gardens during the late 40’s in the Tiergarten Park, which was destroyed in WWII (see picture above). There were two reasons to establish vegetable gardens on the grounds of the ruined park. First, an economic one – to provide home-grown products in the post-war years, and second, it was very important to construct a new identity for the city by reusing the destroyed areas.

After the Mauerfall – the fall of the Berlin Wall – the rediscovery of East Berlin started. The rents in East were significantly lower than in the West. There was a new wave of squatting, as many students moved to East Berlin’s districts such as Prenzlauer Berg. The character of united Berlin changed drastically: from the alternative in the West and the declining capital of the East to a new metropolis. This first wave of gentrification in the 90s was followed by the international ‘Berlin-boom’, celebrating Berlin and its lifestyle, leading to the second gentrification wave.

The late 2000s glorified all the multi-layered properties of the city that had developed during the post-war decades. But simultaneously the Berlin-boom endangered the fragile system, which facilitated all the stated qualities of the city. The following public resistance to the gentrification and urban development plans in some districts is no less interesting. 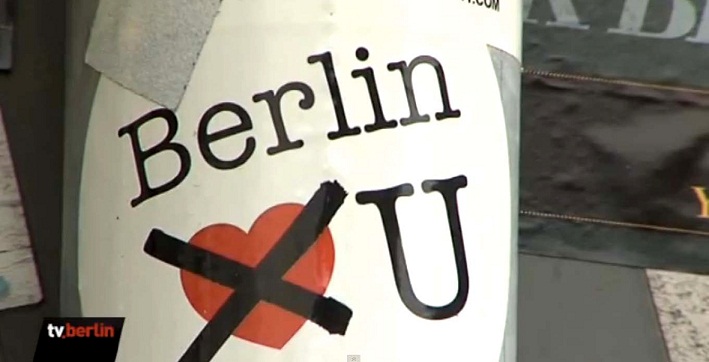 During and after the boom in the late 2000s, some voices of protest started to rise: e.g. Kreuzberg communities’ demonstrations against party-tourists (1) or posters in Prenzlauer Berg district against gentrifiers from Swabia.

The most illustrative example of the community resistance against recent development trends is the action of the group ‘Mediaspree versenken’ (Sink the Mediaspree), acting against the development strategy on the riverbank of Spree. Long after the deindustrialization, the areas along the river in the districts Kreuzberg and Friedrichshain were occupied by a chain of different clubs. These clubs became an important hotspot for the development of the alternative music scene. Due to the riverside development strategy, most of the land use contracts were temporary. ‘Mediaspree’ started to formalise in 2002 and was planned to be implemented in the late 2000s in order to increase investments into the area. The strategy included development with a focus on mass-entertainment and the media industry, which would potentially attract further developments including businesses and high-class housing. Local activist groups initiated several demonstrations against the ‘Mediaspree’ and were massively supported by the voters, mostly inhabitants of Kreuzberg and Friedrichshain, on a referendum (2).

‘Mediaspree versenken’ claimed that the development strategy would only provide cultural services for a very limited group of people. Simultaneously, according to the activists, new development would push aside current people producing cultural values. People who demonstrated against the development plan also organised a party on the streets, bringing the values they were protecting into public space with loud music and dance. For a short time the streets were converted into temporary event venues.

It is important to note that in the aforementioned examples the gentrifiers of the first wave resisted the second wave of gentrification, which was actually only a consequent phase to the processes started by the first wave. Local inhabitants protected the values and character of the district they felt like they had created and voted against the capitalization of Berlin. 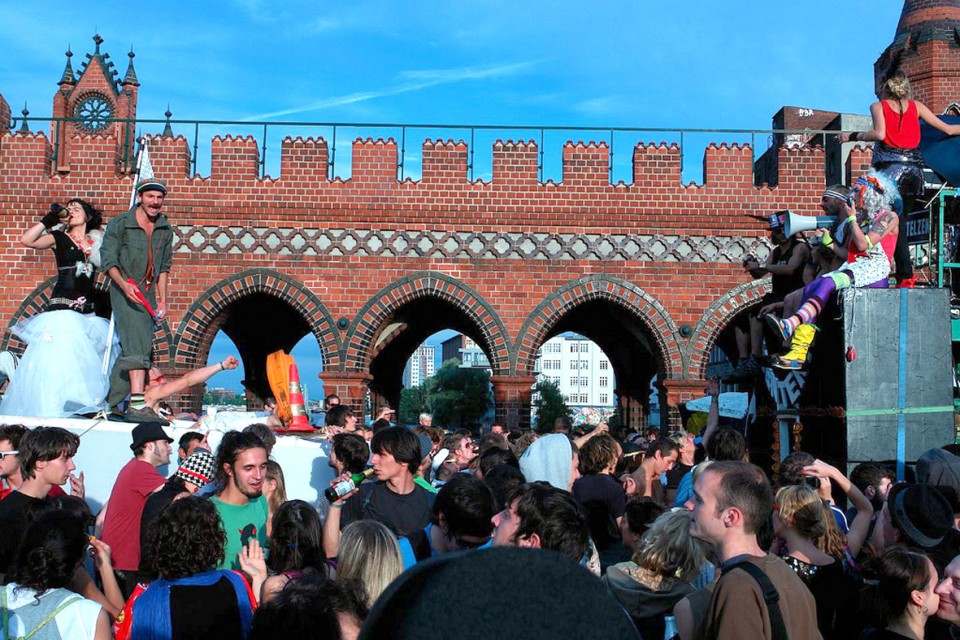 In the case of Mediaspree, the public authorities partly supported the results of the referendum, yet there is no mutual understanding when it comes to the development plans.

Another example of political will is the case of the former Tempelhof airport. Tempelhof airport was situated between the districts of Neukölln and Tempelhof, quite in the heart of Berlin. The airport was closed in 2008 due to the plans to create one joint airport outside the city borders. In the summer of 2009 few thousands of activists planned to squat the area protesting against the privatisation and capitalisation of the urban space, but the action was stopped by the police. In May 2010 the area of the airport was opened for the public just as it was and named the Tempelhof Park. The new park, using the inherent airport infrastructure of about 300 hecta-acres had possibilities for various activities: cycling, skating, kiting, picnics, grilling, sunbathing, watching birds and insects, inventing and trying new sports, enjoying the sunset and sunrise. Tempelhof Park was planned, though, as temporary: the future development strategy included converting the area into a part of the IGA 2017 (International Garden Exhibition) area to be followed by and following a conversion into the area of mixed recreation and living functions. In 2011 the activist group ‘100% Tempehofer Feld’ was created, fighting against the further development plans. The plans for development of Tempelhof Park were, to a great extent, abandoned in the summer of 2012. 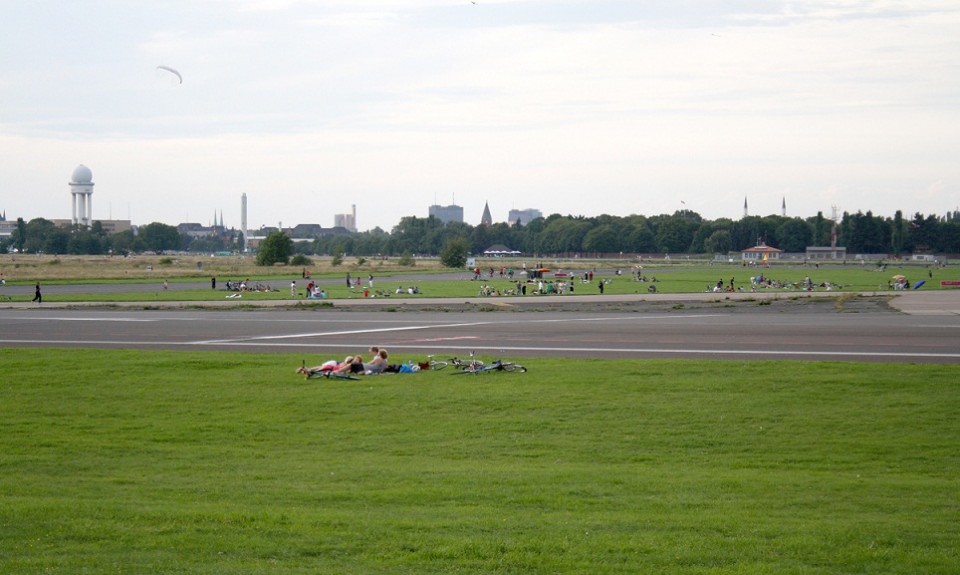 The Berlin of 2010s seems not to be the same as the cool and friendly ever- partying Berlin of 2000s. Few social and spatial layers of contemporary creative Berlin have proven to be too fragile to stand against the boom and its consequences. Die Gentrifizierung frisst ihre Kinder (3).

However the strength of Berlin is not only its vacant space, and lies not only in the special lifestyle which has developed because of the spatial structure. The strong community of the city, which has not only created contemporary Berlin – one of the most pleasant urban environments in Europe, in my opinion – was also able to stand against the changes, which logically followed the first gentrification wave. I can claim that Berlin doesn’t like Master plans and high-end solutions. The cases of MediaSpree and Tempelhof Park illustrate how local initiatives forced the political representatives to include the interests of the inhabitants and flexible development plans into the long-term development strategies. This is what we can learn from Berlin.