The recent Pixelache Helsinki Festival, in its 12th edition, purposely spread its participants across the Gulf of Finland from Tallinn to Helsinki and from Helsinki to Tallinn, as well as from Tallinn to Naissaar island and back. The communication graphics and poster combined these three locations (Helsinki, Naissaar, Tallinn), and colour-coded the different mobilities that were registered to take place as part of the “trans disciplinary dual-city festival”. A mouthful to describe, maybe, but at the same time so would listing the multitude of interests, educational and practice-based backgrounds and origins of those who took the journey.

The article by artist-organiser, independent researcher, Andrew Gryf Paterson, was first published by the Estonian Urbanists’ Review U : www.urban.ee. 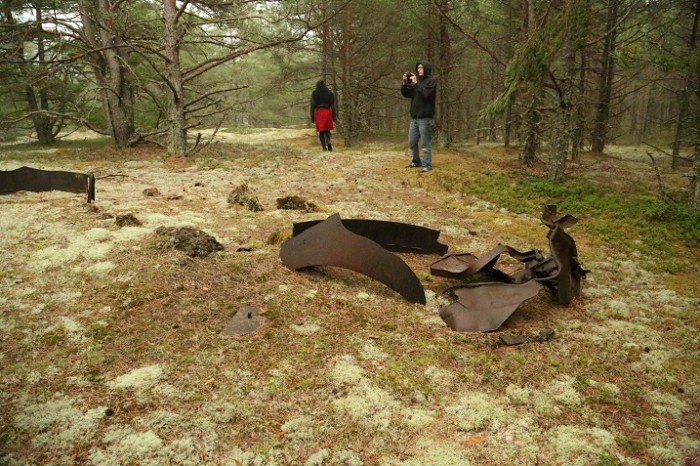 Pixelache is a trans-disciplinary platform for experimental art, design, research and activism, with strong influences from D.I.W.O. (Do-It-With-Others), peer-to-peer, open-source and network cultures. Our festival has been complemented in recent years by an around the year outreach and education programme, coordinated and facilitated by this author. As part of this process, making “neighbourly” contacts in the aforementioned fields of practice, developing friendships and collaboration around the Gulf of Finland, was prioritised in what I call “appropriate networking”, according to resilience and sustainability issues. Many participants in this year’s festival came from these actions, including both natives and immigrants to Finland and Estonia, as well as regional participants from St. Petersburg, Kaliningrad (NW Russia), Liepaja (Latvia), and Minsk (Belarus).

Thanks to travel sponsorship and co-production partnerships, we could invite approximately 20 guests across from Tallinn to Helsinki for the first part of the festival; and we took over 100 guests – about half of whom were neither from Finland or Estonia – to Tallinn from Helsinki for the second half of the festival. As noted in the festival thematic “Facing North – Facing South”, and the invited keynote presentation by Spatial Intelligence Unit and Kristi Grišakov in the conference room of the Viking-boat travel trip between the cities: mobility, cultural and economic exchange has been an historic and contemporary feature of Helsinki/Finnish and Tallinn/Estonian relations, and the mobility of people between these urban conurbations is more complex and diverse than these national dichotomies. This is due to the various motivations, citizenships, ethnicities, and languages which have created – and are currently creating – diverse patterns and perspectives of peer-relations and inequalities.

We arranged, in collaboration with our partners, several local immersions into these complexities. First, Linnalabor was commissioned to make a guided tour around the urban “seashore” region including Kalasadam, explaining the changing attitudes to the city-sea border, including historical and contemporary urban planning and economical issues. The very misty morning weather complemented the theme by offering a fuzzy visual view of the borders between sea and city, especially as most of the attending persons were visiting Tallinn for the first time. Last minute changes to the ferry departure point to Naissaar island (the terminal apparently was not ready) added to the drama. Eight kilometres off the Estonian coast, the shroud of mist prevailed all the way until we landed. The decommissioned army trucks of Naissaar awaited to take us to our “camp” experience. The island, formally known as Nargen in German or Nargö in Swedish, had until WWII an historic Estonian-Swedish fishing community. The island’s military history has left its traces in tangible and intangible forms: military buildings, sea-mine relics, heavy minerals, and a vague 3-month period following the October Revolution when it was declared an anarcho-syndicalist autonomous republic. Closed as a military base during the Soviet period, the island has small number of permanent residents, and a population boosted in summer time with many visitors, a classical music festival initiated by well-known Estonian conductor Tõnu Kaljuste. Furthermore, the island is a respectable location as an Estonian nature conservation area. 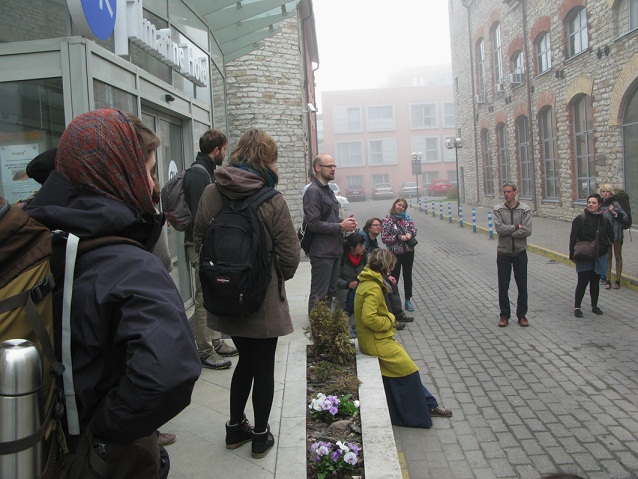 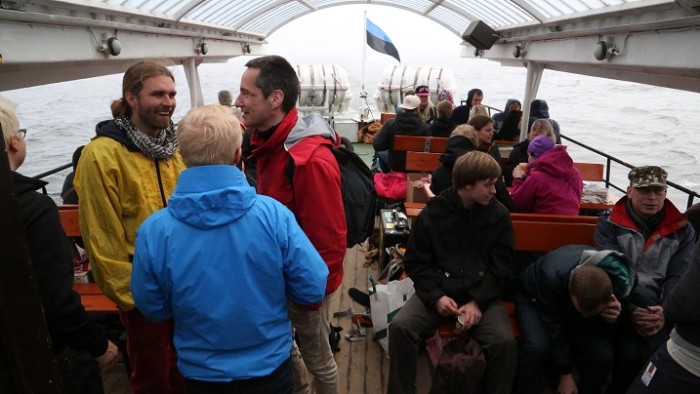 We hoped and planned the island to be a good site for peer-relations, supporting diversity among the layers of difference between different histories, people and places. Our Camp Pixelache approach embraces an “open planning” unconference -style, where participants to finallyultimately decide on the first day themselves what to put in the schedule, including suggestions forof presentations and discussions (workshops were decided in advance). Ville Hyvönen from Pixelache organised the logistics, and arranged that we could use the Kaljuste’s Omari Küün complex and Naissaare Külalistemaja hostel as main camp bases. The Camp Pixelache participants were a mix of cultural and educational professionals, activists, students, and other inbetween roles, from a variety of countries and continents – from as broad range far away as Taiwan and Indonesia to Estonia, Austria and the Netherlands, UK and USA, Colombia and Brazil. We placed advance nominations of activities and talks onto a large fabric “spreadsheet” that was attached to the side of the building: with spaces/venues along the top, and time schedule down the left-side. Dubbed by one as a the “felt excel”, it served as a flexible and moveable event schedule, with “post-it” squares of felt and paper, which allowed participants to write up their ideas for events. Over two days, it was the common reference point for what people wished to do and what to take part in. 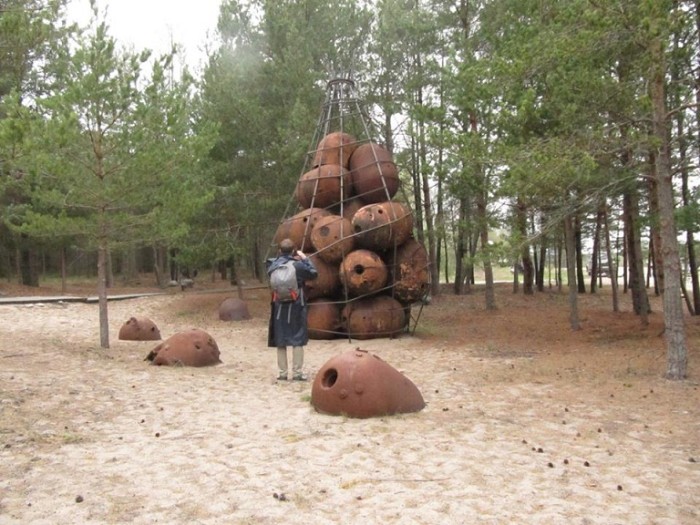 Camp Pixelache participants presented, listened to, or took part in a variety of different events over Saturday afternoon-evening, over-night, and the next day in the morning. The Trans-disciplinary themes of discussion (with or without presentations) included the role of art/artists and activism in civil society, economics, nuclear energy, alternative food consumerism, the Commons or waste issues. More media arts/design-related topics were also represented, such as presence culture in electronic arts and music; while a multi-disciplinary group joined together in an the attic room to discuss open hardware strategies. Several collectives from Tallinn presented their activities to an international audience, for example printmakers Grafodroom or electronics-hackers Hobilabor. Workshops were led on both days, for example, gathering event statistics using found objects from nature, or collectively building a solar-powered battery-charging unit: first-aid for mobile devices. The hostel terrace hosted sunny next-day discussions in the day on 3D printers, or anonymous, encrypted communication tools or love in the time of virtuality. Our keynote speaker Mary Mellor from the UK, presented eco-feminism and the future of money, sparking many questions addressed before the audience and later. 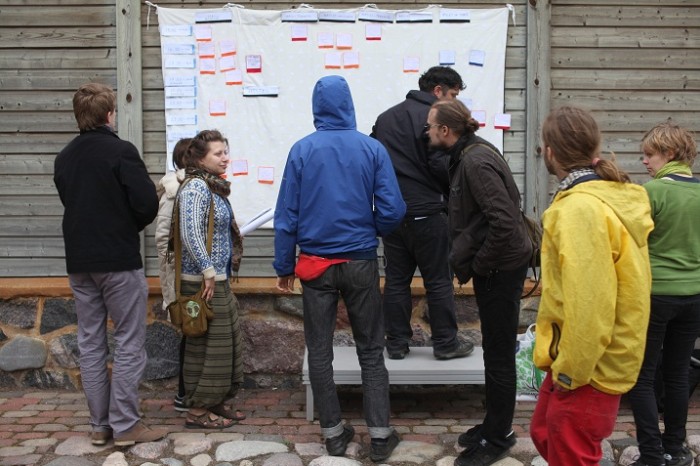 The outdoor hostel terrace and dining-room area was the site of numerous inter-personal conversations, with socialising going on throughout the night, supplemented with sauna. At various times, different expedition groups went out to the beaches, forests and military ruins to document, “print” and record the sights and sounds. A tree+numbers-based Sudoku game was invented by one who encouraged others to get involved; a “naked run to the ruins” performance took place in the middle of the night; while another group tried to catch a signal from ESTCube-1 with a home-made satellitte tracker. Activities and ideas were shared among the group as stories and anecdotes; the documented ones spreading on via social media afterwards as culture or heritage enthusiasts and tourists do these days. On parting, over lunch, different individuals made calls out for participating in future events, in Croatia, Columbia Brazil, Slovenia and Finland.

We made electronic notes from the physical “felt excel” schedule, including meta-data and presentation files related to the Camp Pixelache contributions as best as we could, plus feedback comments and documentation media links, which stays open for attendees and future browsers as a reference from here.

Notably, as a Pixelache festival event with a history in electronic arts and network culture, for approximately the 24-hour period that we were on Naissaar, there was no Internet, neither stable mobile cell phone coverage. At the spot where Bernhard Schmidt, inventor of the Schmidt telescope was born, there was little opportunity to look beyond the site we were at, and the people we were together with. As organisers, this was part of our design, as we hoped such telecommunication limitations would conversely create the space for an intense and diverse exchange, where people were fully present. Hence, old friends re-united, and new colleagues and friends were made in the process of exchanging experience and knowledge. As one participant John Hopkins encouraged: Resonance, alternative views on social networks and techno-social systems, with the aim to understand how they function and how to establish a sustainable collaborative creative practice within them. In other words: ongoing friendships, ambitions and cooperation across borders both physical and virtual. As several mentioned in their festival feedback, the moving and travelling together – via ferries, bus and on foot, plus camping and intense meeting on Naissaar – was the very subtle ice-breaker which internalised the transitions between places. The mist and the storm that moved us that weekend (from one venue to the other) helped rather than hindered. It may not have been obvious what participants were getting into, but by the end there was a definite positive affect: of all the spaces and time-periods experienced at this year’s Pixelache festival days, the Naissaar period was the most appreciated. We hope this gathering of energy and inter-personal exchange will increase the ambition to collaborate and cooperate across borders, as well as our social and collective resilience to the future challenges we anticipate, such as the the societal, energy, food, economic and environmental issues highlighted in some of our discussions on Naissaar, as well as those which we do not yet know. 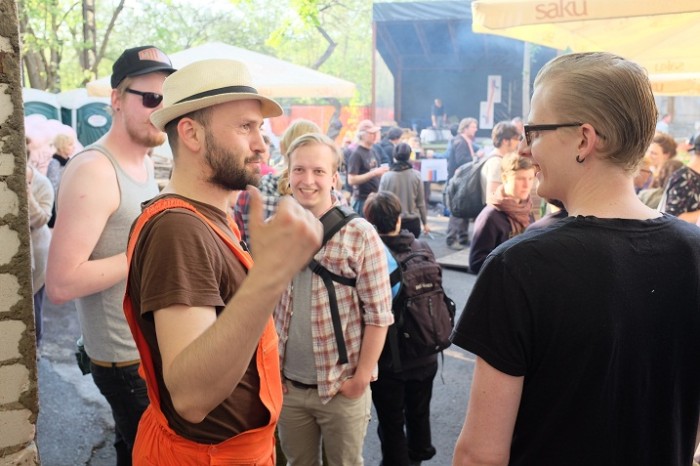 The final event, the welcome/returning party within the EKKM backyard organised by our partners Ptarmigan back on the Tallinn mainland, was a delightful cherry on top of the cake. As a whole, the Estonian side of Pixelache festival 2013 was an experience which many of our local and international participants will not forget. Suur aitäh!

Andrew Gryf Paterson is a Scottish artist-organiser, educator, cultural producer and independent researcher based in Helsinki, Finland. His work is socially-orientated across the fields of media/network/environmental arts and activism. Since 2011, he has been Pixelache’s outreach & education coordinator, and facilitated the Camp Pixelache event on Naissaar, Estonia.