We are standing in front of the Raj Mandir cinema in Jaipur. I’m not entirely sure that it’s the largest cinema in the whole of India, as Samir said, but it’s definitely the most famous one on the Hindustan peninsula. The art deco building was finished in the 1970s. The golden age of Bollywood had passed by then and violence and more serious topics had found their way into films. This type of films influenced by Western culture were appreciated by the upper class, however, never gained much popularity among the masses. Was it really necessary to build a movie theatre seating 1 500? Well, one cannot forget that Jaipur is located in the golden triangle frequented by many tourists. For example, travellers like us.

I landed in Delhi with my friend Kristo, equipped only with backpacks, and having chosen a cheap hostel for our first night. I had printed out directions how to locate the hostel in the maze of streets. However, it turned out the directions didn’t contain the most obvious marker – the intense stench of urine. The hostel, turns out, is located right behind a public latrine. The next morning, while enjoying coffee and omelets, we had absolutely no idea what to do next in India. When the gold-toothed hostel boss suggested a four-day trip through Āgra and Jaipur, we jumped at the idea. Our companions were two Finnish hippie girls Anna and Liisa who will be henceforth known as Anna-Liisa. Our driver and guide was a middle-aged Hindu gentleman called Samir. His English was quite comprehensible and his age-old Ambassador seemed to have enough life in it yet to endure the following 1 000 km. 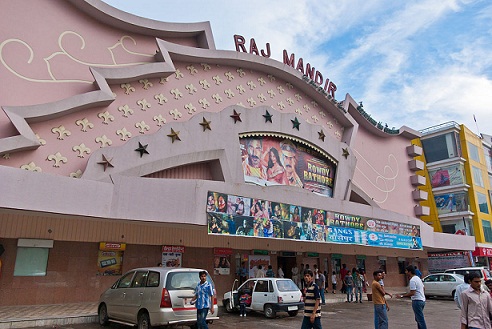 Having arrived in Jaipur, we admire the pink old town, enjoy a meal in a vegan restaurant, roam the bazaar and happen upon a Hindu ceremony. I suggest we spend the evening in a curb-side restaurant, people-watching while enjoying a couple of Kingfishers. This, however, does not go down well with Kristo, who is tired of the attention from locals and wishes for some peace and calm. To avoid constant interaction with the locals, he has donned worn-out clothes, doesn’t shave and keeps his hair in his face. His strategy is not really successful. However, Anna-Liisa knows what needs to be done – we have to go to the cinema for an actual Bollywood movie.

Raj Mandir is currently showing Vivah. It’s been on for a couple of weeks already, four times a day. Since there seems to be a constant queue at the cinema, we purchase the tickets a couple of hours before a screening. The ticket costs a little over a euro, which is pretty steep for India. We are greeted by a vast cream-coloured foyer with red carpeting on the floor. A regal staircase sprawls upstairs. Snacks and refreshments are on offer. The massive cinema gives off a strangely small vibe because of the lack of legroom while sitting down. The seats are a little uncomfortable for Europeans used to certain comforts. The screen, however, is the largest I have ever seen.

The dimming lights give way to the most enchanting movie experience ever. The film begins without the mandatory Coca-Cola advertisements. The following three hours are filled with Indian-style love and hate, costumes, dances, dream sequences. And of course the music; it gives you goosebumps. It’s definitely something I want to play at the Maailmamustrid party. No wonder that soundtracks for these films are often even more popular than the film itself. And the audience wants to see the masala type of film, where love and adventure, tragedy and comedy are all entwined. The glamour and the fantasy of the movies are a great way for the Indian people to escape the mundane and tiring everyday life. Their reactions are an important added feature to the film itself. They are not silent and occupied with popcorn, as is the case over here. They have come to have some fun and are fully engrossed in the story. They shout comments, clap, whistle and boo, if the need be. Some comment on the commenters. We get to enjoy both – the film as well as the audience.

The storyline is really rather simple – even we understand the most of it, despite the language barrier. From time to time – concerning business issues, for example – the actors also speak some lines in English. Vivah means wedding. An aspiring businessman Prem and orphaned Poonam are arranged to be married. Poonam’s stepmother hates her because she is much prettier than her own daughter. Prem and Poonam have chemistry, but of course, there is no kissing or anything like that.

After an hour and a half there’s an intermission. That’s a really good idea since it’s difficult to sit still for so long. I remember suffering through The Lord of the Rings in Estonia… 1 500 people get up to stretch. Communication seems inevitable, so we try to hide behind a huge potted plant. We are soon discovered though, and required to update all of them on how we are doing and what we think of the film. Someone shows us a picture of their girlfriend on their phone. Someone offers sweets. They are friendly and curious, but it is exhausting. During the day in the city we picked up a follower in the form of a little boy. When he asked for our names, I replied nonchalantly, “Who cares?” He continued to trail us for about an hour, introducing the sights of the pink city, and politely addressing me as Mr. Hooker.

Intermission’s over and the show goes on. A day before the wedding there’s a fire at Poonam’s house. She storms into the burning building and saves her stepsister; surviving but getting badly burnt. However, this brings peace between her and her stepmother and the film ends with the wedding. The audience cheers and claps and behaves like they’ve all been invited to the ceremony.

Later I read form the newspaper that critics have called Vivah boring, sickly sweet, weak and utopian. Bollywood has already overcome its dry spell long ago. People buy more tickets to see Bollywood movies than Hollywood productions and American filmmakers take inspiration from Indian films. Perhaps it’s time to rename Bollywood as Mollywood, since Bombay is now known as Mumbai. However, if you could go to a cinema in India only once in your life, make it Raj Mandir.