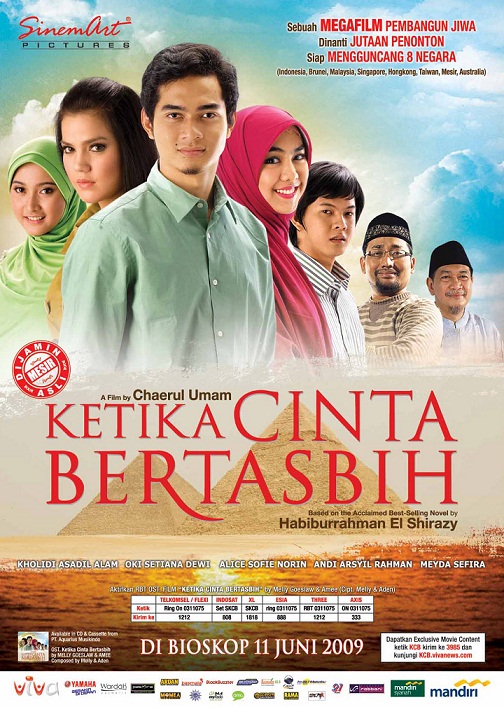 A movie poster from Indonesia

The first time I happened to a cinema in Indonesia I was running from corruption – a police officer asking for money for cigarettes was reluctant to return my ID to me. Being fundamentally against bribes, I had no chance but to wring the document out of his hand, apologize brusquely and make myself scarce. In order to avoid life imitating an action movie, I decided to take refuge in the XXI cinema around the corner.

When I finally managed to get to the ticket booth, the only movie on offer was the 3D rendering of Titanic. The price of a student ticket was 35 000 rupees – the equivalent of three street vendor dinners. Clearly not the entertainment of choice for everyone. Phone cameras flashed before the start of the screening and a couple of waiting faces found their way onto Facebook, Twitter and Instagram. The strange lonely foreigner in the back didn’t go unnoticed. I noted with satisfaction that since they were all so small they couldn’t hide the subtitles from me, no matter how hard they tried.

I first saw Titanic in cinema Kosmos in Tallinn while on a triple date while still in school. I can vividly remember Kate Winslet’s hand sliding down the foggy car window and Leonardo’s darting looks while drawing a nude woman. I kept waiting for those scenes, but they never did appear in the Indonesian cinema. Instead, the film was either strangely jumpy or really slow in places and edited to seem like after a big thrilling chase Leonardo has decided to simply draw Kate’s face.

These adjustments are down to a local law that makes all kind of pornographic activity punishable. The term porno-action signifies all kinds of lewd and immoral behaviour according to Indonesian officials. Depending on interpretation this can include kissing in a public place, sunbathing in bikinis, wearing a miniskirt or revealing your belly and shoulders.

The activists lobbying for this have also eagerly supported the making of films with moral content. Most of these films fall under the category of Muslim fairy-tales about a good woman in a hijab whose dream prince will eventually propose to her. Although most actors couldn’t care less about religion, there have been cases where they were required to appear in modest dress at the casting, cite the Koran and do other Islamic tests.

However, there is a lot of hypocrisy and double standards in Indonesia and often it is rather difficult to explain how a country, where Lady Gaga and Titanic have been dubbed indecent, produces films that would be called nearly pornographic elsewhere. Instead of foreign pop stars there are perfectly legal dangdut singers that writhe in a miniskirt in front of hordes of men, and instead of Titanic there are films where the heads of people having sex explode. These are mostly produced locally as an attempt to make a fast buck and to mask the emptiness of the screenplay by attractive actresses in tantalizing skimpy clothes.

Love… My neighbour is a motherghost
Sorry, I knocked up your wife
It’s difficult to remain a virgin in Jakarta
Bra Thief
The menstruating ghost of Puncaki
Raped by the Devil

Another way to appeal to the audience is laughter. Regardless of their age, everyone here giggles like a teenager. I also noticed that me and the Indonesian audience – we never laughed at the same time. They laugh at serious issues. For example, a director tried to talk about the serious topics concerning his film about Muslim extremists, at the same time the actors could only laugh and repeat: “So cool, it was so cool to make this movie!”

Even though the lack of quality films has also resulted in a decrease in the number of viewers, change in production has yet to happen. Corruption and nepotism has brought even the most banal of productions onto the screen; you just need to know the right person to pay. It also doesn’t do much for the market diversification that Indonesia has put high taxes on Hollywood films and importing them is complicated.

What is popular in Indonesia is piracy. Some download straight from the Internet, others buy from official copy shops. A lot of it is recorded straight from the cinema with all the heads bobbing and phones flashing – every buyer knows not to go home without double-checking the DVD first. The cover design, however, is so perfect with even a copy of the shimmering silver sign “Piracy is a crime. Buy movies with only this sticker!”

Even though the XXI building screams for America, the content shown inside is still very much Asian. Hollywood production is cornered by Muslim activists and this makes opposition for the Western culture stand out in public. Local junk-cinema in all its lewd glory is so bad and unpopular that even the activists probably can’t take it seriously. As long as the producers buy airtime without competition, the audience will just buy a copy to finally see Kate’s nipples.