The article by PhD student in Urban Sociology at Queen’s University Belfast, Linda Rezvan was first published by the Estonian Urbanists’ Review U : www.urban.ee.

Berlin not only attracts tourists, but also Germans from all parts of Germany. They might be moving to the city because in 1991, Berlin became the capital of the officially united Germany (1), or they might be attracted to the creative atmosphere that has surrounded the city since the 1980s. In the beginning of the next decade a large number of East Berliners decided to leave their hometown to look for better life in West German states. Many of them already left some months before the fall of the Berlin wall to demonstratively express a separation from Soviet politics that some look at as repressive (2). As a result of this mobility, Berlin’s population in 2009 had changed 50% compared to the 1980s. 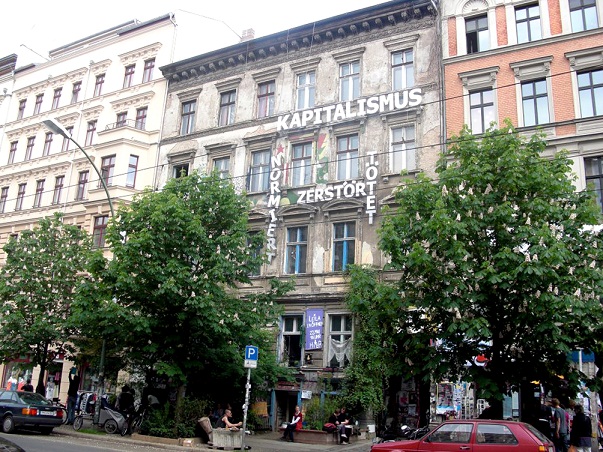 Though united Berlin is famous for it’s flamboyant art scene, the challenging rejoining process of the city, especially for those Berliners who lived there before the fall of the wall, deserves attention. Here I want to focus on East Berliners whose lives have gone through dramatic changes since unification. This change is only slightly comparable with the transition period that was experienced by people from the Eastern Bloc. For example, unlike the Baltics, the territory of East Germany was included into the already existing Federal Republic of Germany (FRG) essentially overnight.

For East Germans and East Berliners the end of the wall required a redefinition of their people and national identity (3), an adjustment of the already developed structures of West Germany, and a coping with the loss of personal and family values. Additionally, a new world was opened to them not only structurally, but also in terms of space – Europe, West Germany and the other side of their home town that grew twice after the wall. Therefore the memories of East Berliners from the early 1990s are often described with the phrase ‘for the first time’: ’the first time I went to West Berlin; the first time I went to a western grocery store; the first time I ate a kebab; the first time I had a job in West Berlin; the first time I could walk on my home street without being faced with a wall’. The transformation of the city directly influenced movement in space and changes in social environments. Both are tied to the changes of the governmental structures as reflected by changing employment. In the territory that was East Germany, unemployment rocketed from 0% in 1989 to 14% in the beginning of 1992 (4). Those East Berliners who managed to keep their former positions still felt the structural change. For example, kindergarden teachers had to change from socialist methods and principles to western approaches. East Berliners had to find their place in a very unstable environment – in terms of space as well as structure – and finding the path was personal for everyone.

Sabine is a woman in her 40s who has studied agriculture in East Germany, but after the Wende (in German ‘the change’, ‘a turning point’) she started to study history. After graduating Sabine has shortly worked on different positions, but hasn’t found a specialised job, now she has been unemployed for quite a while. She lives in Prenzlauer Berg that has in the last 20 years been completely transformed from a deteriorating soviet district into a high class residential area where a large population consists of former West Germans. The only reason why Sabine can afford to rent flat there is an over 20 years old contract that, according to the law, can’t be changed.

For Sabine, her lack of success on the labour market is not caused by her East German origin, but by a principal disagreement between her, The Federal Republic of Germany and West Germans:

‘During my studies I worked on an art market on Straße des 17. Juni (West Berlin) and I was the only East German who worked there. Whenever I dared to say that I’m from the East – and that didn’t happen only there, but often when I met West Berliners or citizens of FRG, they all said to me (she mimics in high pitched voice): ‘I didn’t make that you are from the East!’. And they were always thinking that it is some kind of a compliment. Like they had said something really nice and actually it is a horrible disease and horrid in general. Why did they think that? Why do they say such things? And yes, somehow it has created a situation that I don’t feel like home any more (in Prenzlauer Berg) and many others feel the same…’

Sabine’s words are full of emotion, be it dissatisfaction, sadness, bitterness or disappointment. She doesn’t feel at home in her neighbourhood nor does she in the whole FRG, because for her the people, their characteristics and the state are closely linked. Sabine’s quote speaks of the change of social environment and the feeling that she has been displaced (5), without physically changing the location. For Sabine, finding her ’own place’ in rejoined Berlin has been difficult because of different reasons and attachment to her home has turned into bitterness that she directs towards the FRG and West Germans avoiding going to the West Berlin, when possible.

A different example is Anne who worked as a carer in a youth home in East Berlin and right before the fall of the wall got a job in West Berlin through contacts, in a home with mentally disabled people, where she also works now. Anne also lives in Prenzlauer Berg, though on a less popular street. For Anne, as well, a new world with new challenges opened with the fall of the wall that necessarily didn’t match her expectations for what East German citizens fought for in the end of 1980s. Namely, many of them demonstrated in the autumn of 1989 for reforming the East Germany not necessarily for rejoining two Germanies. Now, it is hard to say if the vision of reformed East Germany was formed before rejoining or only when it had already taken place and it was clear that the whole process is absolutely unequal and only took place on the terms of West Germany. Despite of that, Anne has supported the changes in her environment completely:

’Indeed, I have a favourite spot in Berlin and this became my favourite after the Wende… namely there is a bridge on my way to work that connects the East and the West. The border was in front of it. I cycle over that bridge almost every day when I go to work. And whenever I am on the bridge a square opens before me, that is not a common characteristic for this city – there is a lot of sky and space… And I go to from Prenzlauer Berg (former East Berlin) to Wedding (former West Berlin) across the bridge. And… every time I think ‘I can cycle here!?!’ Because I lived on that street and exactly on that street there was the border and I had to show my identification every time I walked, even when I wanted to get into my own house… and I could never have guests because the had to be preregistered. This is also the reason why I moved… And now this is so special that I can cycle over that bridge… and I would love to move back there.’ (Says with tears in her eyes.)

For Anne, the place that she connected with control and repression before the fall of the wall, gained a new meaning – crossing the bridge every day is accompanied with an emotion that is felt by those who understand it’s symbolic. Similarly to Sabine, Anne speaks of her past and present. The wall has been replaced with freedom that she loves and appreciates. Also in West Berlin she has found districts that she really like and to where she would happily move to. 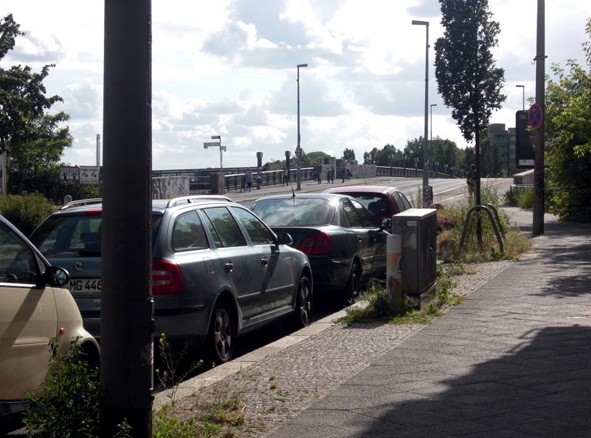 Berlin is therefore a very interesting example of how the lives of the citizens are strongly connected to the historic processes taken place in urban space. The stories of East Berliners that characterize Berlin are often connected to ’starting a new life’ or ’finding one’s place’ in a rejoined and changed Berlin and Germany. Though ’finding that place’ has for some East Berliners reached a point where they don’t feel at home in Berlin any more, for others Berlin has developed into a special kind of home that they didn’t know to imagine ever before.

Linda Rezvan, the author of the article lived and worked in Berlin during her research for PhD (2009-2010).

(2) – I have consciously written ’that some looked at as repressive’ because the interviews I made for my PhD made it clear that not all East Berliners felt repressed. Some just lived their lives and accepted the limitations without particular disapproval; others travelled around the Soviet Union and enjoyed their freedom in that way. This freedom was of course only possible because they themselves or their parents belong to the Socialist Unity Party of Germany. Of course there ere many people who felt repressed and for some this stress was expressed in physical complaints. However, some of my interviewees miss the life before the fall of the wall, because they have lost the societal status that they had in East Germany.

(3) – Anderson, Benedict. 2006. Imagined Communities: Reflections on the Origin and Spread of Nationalism. London: Verso. Author’s explication: Having experienced challanges related to rejoinging of two Germanies that were to a great extent connected to the language barrier a discussion evolved, if East and West Germans have developed into two different nations that also define themselves through different states. 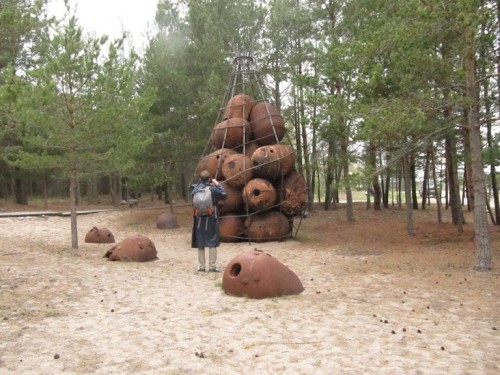 The recent Pixelache Helsinki Festival, in its 12th edition, purposely spread its participants across the Gulf of Finland from Tallinn to Helsinki and from Helsinki to Tallinn, as well as from Tallinn to Naissaar island and back. 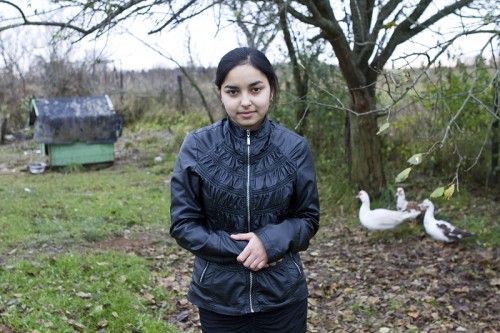 Gypsies as a peripheral community

After estonian linguist Paul Ariste, who the older generations of Romas still call by the cognomen “white gypsy“, study of this small and private community has been arbitrary and chaotic. There has been a couple of master theses, that unfortunately remain hidden from the wider audience, and from time to time an article is published in the media, but as a stereotype these flashes have a negative undertone.