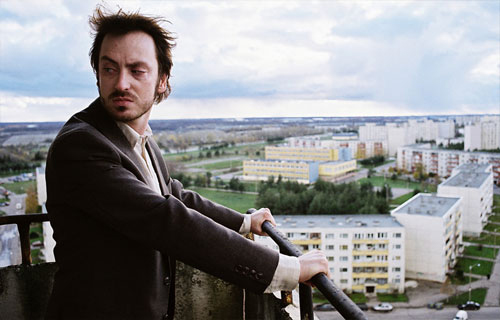 Still from the award-winning "Autumn Ball".

Three men walk into a roadside pub. They take the back room, converse in a low voice, crack a couple of jokes and after a few (dozen) beers a new idea for a film is born. Estonian filmmaking has always been a DIY operation that has endured, survived all the disruptions and hardships, and successfully reached its first hundred years.

Here’s an introduction to the cinema of a small Nordic nation. In Estonia we know Bent Hamer, Hans Petter Moland and Tommy Wirkola because we share their dark sense of humour. Now it is time to offer something back with a medley of fresh Estonian features, documentaries and animation.

51% of Estonia is covered in forests. That is over half of our territory, yet we have no idea what is going on there. Estonian politician Aadu finds out the hard way, when a casual mushrooming trip to the woods turns into a survival nightmare. A film that effortlessly switches back and forth between drama and comedy, horror and action, Mushrooming taps into the local psyche, satirizing social issues as well as politics, when a scandal suddenly breaks out in the capital, threatening to destroy Aadu’s career.

During the Soviet times, the leaders of the Estonian Communist Party wanted, at one point, to erect a huge metal net in the Baltic Sea to block airwaves that permitted people in Tallinn to watch Finnish television. They were right: Disco & Atomic War argues a very valid point that it was actually jeans, disco and Finn-TV which brought on the collapse of an empire. The film is done in a fiction doc style, mixing dozens of stories from the era that add up to a witty polaroid of the times when everything was just a little bit too crazy.

A 3D puppet musical in Italian and French that highlights the current topic of European immigration? Yes, it has to be seen to be believed. An Italian bourgeois girl Lisa Limone falls is love with a boat refugee Maroc Orange from North Africa. They sing their way through social injustice, but will their fruity affair be rewarded with happiness? Those who still have their eyes intact and untouched by the massive explosion of colour and sound by the end of the trip, will find out.

In this much-acclaimed film, existentialist drama meets pitch-black humour. An architect, a writer, a hairdresser, a single mom and a wardrobe clerk try to maintain integrity, find love and make sense of their lives. The high-rise district they all call home seems to strip them all of any personality, and all is fair in this war: alcohol, diaries, TV soap and strangulation.

A Spell to Ward off the Darkness (2013), documentary. Directed by Ben Rivers and Ben Russell

Is it possible to make contact with your spiritual self in a modern world? Robert A. A. Lowe (known from the band Lichens) sets out to do just that, as a member of a hippie commune in Estonia, a hermit in Finland and a singer in a black metal band in Norway. Ben Rivers and Ben Russell have constructed a wonderful, spatial, metaphysical masterpiece that isn’t even sure if it’s asking any questions, or giving any answers. After all, it’s all about the journey, isn’t it?

Flowers from the Mount of Olives (2013), documentary. Directed by Heilika Pikkov

Right alongside Jerusalem, in a Russian Orthodox Convent in Mount of Olives, lives the 82 year-old Estonian nun Mother Ksenya. Although inside the convent’s cement walls the clock is never set and life still follows the Julius calendar, the 20 years that Mother Ksenya has spent there have passed by in a flash. In the hierarchy of the nunnery she has now achieved the second-to-last level. She is heading towards complete silence, the Great Schema. But before that she has been given permission to tell the story of her life for the very last time.

How to create an urban living space? How to change the world/your neighborhood? How to make the revolution? This film is about the New World Society, a citizens’ initiative in Tallinn, Estonia. Some see them as an irresponsible bunch of hippies, and still others think they are heroes. They began as anarchist urban guerrillas, whose mission was to fight for a cleaner and car-free environment by legal and illegal means, thereby creating headaches for the police and the vigilant citizenry. But one day, recognition, attention and funding arrive. This is the anatomy of a revolution: a story about people, relationships and great changes. A dramatic adventure filled with love and anarchy.

See the dates and times of the screenings here.