Karolina Konieczna is a young Polish fashion designer and one of those who will be presenting her collection “Transgressing Corporeality” at this year’s Fashion-Performance-Dance, an annual fashion competition held in Tartu, Estonia on the 3rd of May. This year’s theme is ‘body language’ and in accordance with that, the catwalk will be brought between the walls of the Old Anatomicum. Konieczna talks about her new collection, the notion of beauty and her fascination with Martin Margiela. 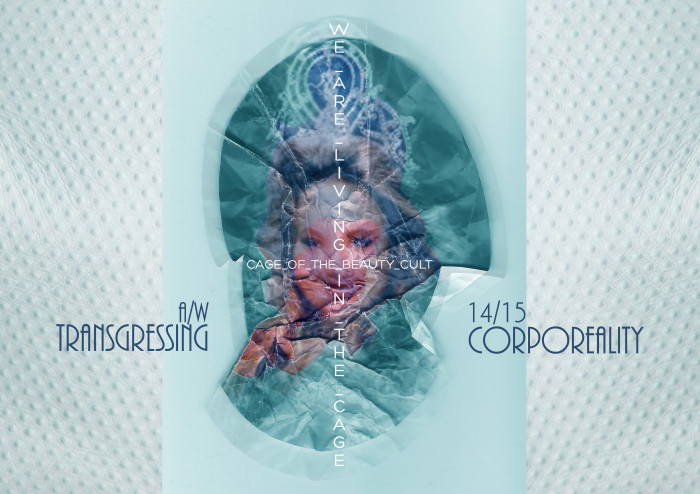 Please introduce yourself. Who are you and where do you come from?

My name is Karolina Konieczna, and I come from a region in the East of Poland known as the ‘green lungs’ of the country on account of its natural beauty. For the last 5 years I’ve been living in Łódź, an industrial town where I’ve been studying fashion design and textile printing.

What is your impression of arts and fashion?

The thing I value above all else in art media, as well as in other forms of communication, is authenticity. I believe that the visual aspect should serve as a tool to present content. This is why I appreciate modernism, especially conceptual works, but also the Fluxus group, Dadaism and Surrealism. I particularly value the specific philosophy of Martin Margiela. By being against the commercial flow, he creates laws and rules in opposition to the fashion world. In opposition to the ubiquitous cult of person his aim is a cult of impersonality. Margiela expresses his ideas through recycling but also by transformation and reinterpretation, making timeless proposals of clothing. Recycling and reuse of materials are the main rules of his brand. Using previously collected items, such as battered porcelain pieces, old gloves, socks and playing cards, Margiela gives new life to objects by making clothes of them. He respects traces of the passage of time and exploitation ‒ they are the keystones of his artistic expression. I found him genius because of comparing art and design in one of his interviews for View on Colour in 1998. He responds to questions:

Where do you find your inspiration for collections?

I draw inspiration from daily observations. Ideas often come to me while my mind is at rest, for instance when I’m travelling. Usually the seeds of an idea only come together to form an integrated, coherent whole whilst in the Alpha state, moments before falling asleep. I believe that the subconscious mind is then more creative than it is in waking life, so I remember to keep a notebook ready at my bedside. My stimulus for activity is based on the energy and emotions of people I’m surrounded by. The content of my work is mainly driven by my innate capacity for analyzing people’s behaviour and the world around me in general; however, it’s inevitable that the media I consume on a daily basis subconsciously affects my mode of expression.

What is your purpose as a fashion designer? What would you like to achieve?

I am constantly searching for the perfect solution which I see in the harmony between the visual aspect of the garment and its symbolic content. I treat design as the art of compromise between creating quality originals and the utilitarian nature of the clothing. I aim to create garments which are more than physical products. My works carry a high degree of emotional investment. I would like my clothes to make a visual impression and be practical, but more importantly, they should tell a story. A garment is not only a product, it also has a soul and the soul of each individual item is injected by its designer, not only through their artistic vision, but also through their life philosophy. Authenticity isn’t found through creating something just because it will be perceived as valuable. That which is genuine will inevitably find an audience.

How do you describe your style?

I find beauty in minimalism, and therefore particularly appreciate solutions which arise out of forms in an organic manner and forego unnecessary aestheticization. Simple forms should be accented by tastefully and thoughtfully created details. Colour plays an important role in my work and I’m fascinated by combining colours and subtle differences in texture. I use natural materials and strive to create garments which are pleasant to the touch. I recently discovered a previously unknown joy in embroidering, and through this I understood that an artist’s style and development of experimentation undergoes a natural shift through time.

What has been the biggest disappointment in your design process?

At my first attempts as a designer I was sorely disappointed by the resulting garments which came back from the tailors because they differed substantially from my expectations. As a designer, one is often deceived into thinking that a conceived project is complete. You only know how it’s going to turn out once you’re holding the completed object, despite having produced it yourself by hand. My current approach is to treat the process of creation as an opportunity for experimentation, and sometimes the results turn out to be better than I’d originally imagined.

What is the most memorable fashion show that you have participated in?

I remember each show very well. Although everything has been meticulously prepared, there are always surprises backstage. Twisted ankles, lost clothes moments before the show, even a model who suddenly left as she’d decided that her hours were up. A replacement was found of course, but you can imagine the frustration. I remember one show during Warsaw Fashion Street 2011 particularly well. The event was very professionally organised, the models were experienced, and the sound system good. It’s unfortunate that it’s not always the case. My family came to see the show and was incredibly supportive. I’ll never forget my father’s reaction when he told me that although he’d recorded the whole event on his camcorder, his hands were shaking so much with excitement, the quality of the video was rather poor. The show received great reviews, and although it’s rewarding to be congratulated, the greatest pleasure for me is the joy it can bring to those you are close to.

What, in your opinion, makes a good fashion show?

A good show is one which doesn’t end with the presentation of a collection, but one that owing to thoughtful preparation is able to convey the idea behind the works and immerse the audience in designers’ concepts. The atmosphere created during the show should reach further than the visual senses. Music is such an important aspect it should provide a backdrop for the works being shown, but also instil excitement in the audience. 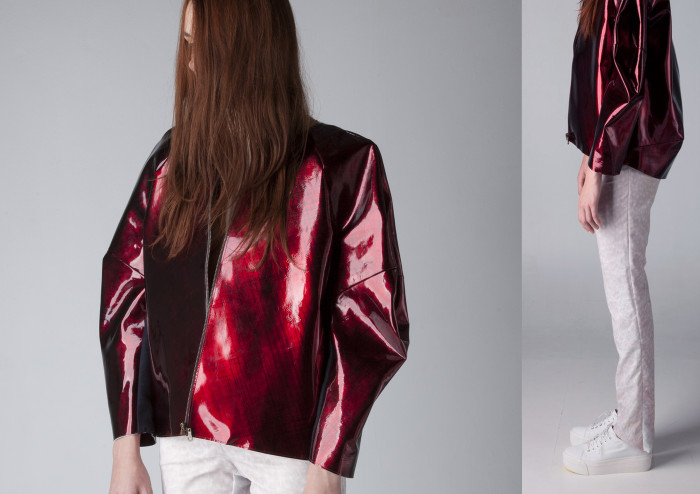 At this year’s Fashion-Performance-Dance you will present your collection “Transgressing Corporeality”. Tell us more about the concept. What inspired you the most?

The idea of creating the collection arose out of a feeling of discomfort connected with the necessity of operating in a corporeal world. The notion of a singular model of beauty and of a strive for unattainable bodily perfection presented to us through glossy magazines, billboards and films influences our norms and desires, and subconsciously shapes our aspirations. This tendency undermines the value of natural variance, hinders the process of self-acceptance and is even a factor contributing to serious diseases such as anorexia and bulimia. This uncompromising ‘body cult’ leads towards women inadvertently disfiguring themselves in a futile attempt to conform to these accepted norms. I often wonder to what extent intentional decisions made in front of the mirror relate to this objective model of attractiveness and how much are they a case of comfort and personal aesthetics. These fundamental aesthetic assumptions have led to focus on distinct forms which correspond to varying levels of self-acceptance. Many pieces manifest a symbolic defensiveness towards disguising natural body shapes. Others, on the other hand, highlight imperfections in order to present their beauty. In my collection, this idea is conveyed through an aesthetic play using ‘hairy’ prints and wrinkled leather ‒ an assertion that true beauty is found in individuality and imperfection.

What is the first thing that comes to your mind when you think about Estonian design/fashion?

The first thing that comes to mind is a circular floral pattern I saw on a pair of knitted gloves given to me by my grandmother’s Estonian friend. I’ve noticed a characteristic system of modular design in the Estonian aesthetic which produces a rhythmic effect. This approach to building forms can be seen in both intricate pieces, such as jewellery and ceramics as well as larger scale projects like furniture and architecture. A delicate openwork often appears, highlighting contrasts of light and shadow, which is inspired by and is a modern incarnation of the motif found on those gloves.

What’s the most interesting trip that you’ve been to?

The most exotic place I’ve visited was definitely Hong Kong. The opportunity to go there arose thanks to my involvement in a project by the Centre for the Promotion of Fashion. It was like I’d been transported to another world. It just so happened that it was Chinese New Year and the city was adorned with red and gold to see in the year of the dragon. The streets were lit with a multitude of lights and neon shop signs, and filled with orange trees and shrines. The crowds were so thick it was almost impossible to turn around, as you were engulfed in a wave of people who were entirely used to functioning in such a dense environment. Among countless stalls, I recall the scent of one where an elderly man was selling an exquisite variety of teas. I’ll also never forget the ride on an old bus over the mountainous terrain which leads to Buddha Island. Arriving there, against a backdrop of incredible scenery and exotic vegetation, we were greeted by a massive plastic sign encouraging us to ‘go to Buddha’ and showing the way to the statue at the mountain peak. This grotesque picture was a perfect representation of a place of extravagant beauty accompanied by fluorescent plastic. 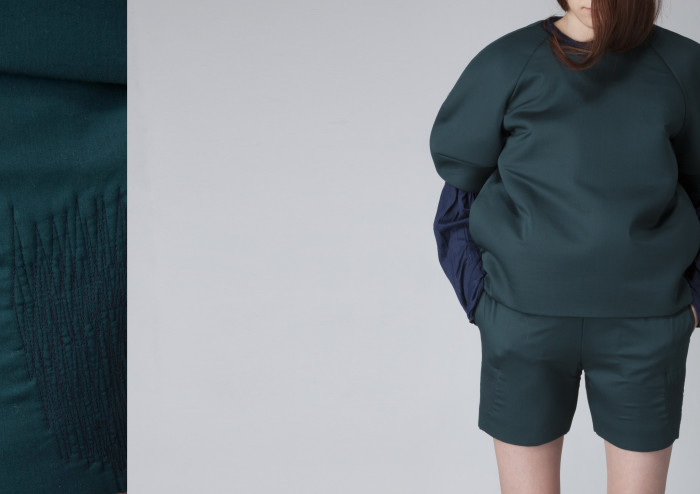