Kristel Saan’s exhibition „Sunbed” is open at XL Art Space in Helsinki until the 28th of December. 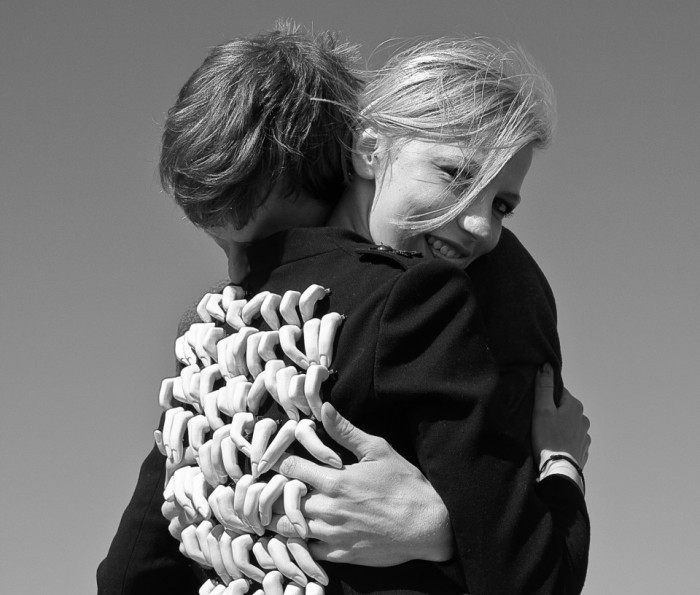 It’s a small trendy vintage clothing store near the Helsinki railway station. Mostly second-hand and army surplus stuff for the hip and the cool Helsinki youngsters. “Indian Summer” written on a white frost spray or similar on the basement store windows. Natural frost too has found its way on the glass, when I take my first glimpse inside. It seems warm and cozy. Like a real Indian Summer is and should be. A blond girl in a silvery evening dress is watching back at me from inside. I try to wave at her, but she doesn’t notice. Maybe I’m still in the shadows. Maybe all she can see through the frost is the faint glimmer of my cigarette.

Inside she gives me a big hug. She is the artist I am here for. In a clothing store. In a clothing store that hides a little big secret – an aptly named art gallery called XL Art Space. We have the usual chitchat with Kristel Saan – that’s her name – before I run to the wine table. “First things first,” I think to myself. I pour a glass of warmness against the cold weather and take a sip. And now I can finally enter the gallery itself.

I pull aside the black thick curtains that cover the entrance and step in. Fluorescent lights. Long lines of bright fluorescent lights laid horizontally on all four walls. Four lines to be exact – all evenly set some four inches apart above one another. Very precise. Very.

My hair is almost touching the black canvas ceiling that is of the same black material as are the entrance curtains. In fact, the whole room is of it – even the floor beneath my feet. And there is something on the floor – something ceramic – resembling of big bread crumbs already decaying. Yes big. From a big loaf of bread that would be the size of this tiny room or even bigger. They are scattered around like an archipelago, as someone notices later in the evening. And on the largest of those brown and blue islands a slash of red thick blood has been poured over and stained the floor canvas. Red milk spilled on bread crumbs.

We are in on a gallery display. Most often when you see ceramics exhibited in a museum or an art gallery it’s sealed behind of a glass display. Especially fragile looking pieces like this. But now we are inside one. This ultramodern fluorescent setting is in huge contrast with the burnt pieces of ceramics set on the floor almost as if a vase would’ve dropped from the sky and shattered into pieces. Breaking something. Something living.

The artist tells me afterwards she had to take off all of her clothes when pouring red paint on the ceramic crumbs just before the exhibition was to be opened. To save her lovely dress from getting stained, that is.

“Sunbed” as the installation is called is Kristel Saan’s first solo exhibition proper. And now when she’s lying there on the floor for my photos it does serve as a bed indeed. An XL-size bed on the bright light of the Sun. A fluorescent one. No flash required. This is the sunshine that makes the Indian Summer. On a cold and dark December night I too could take my clothes off and bask in the Sun. No tanning lotion required – there’s the red red wine she is offering.