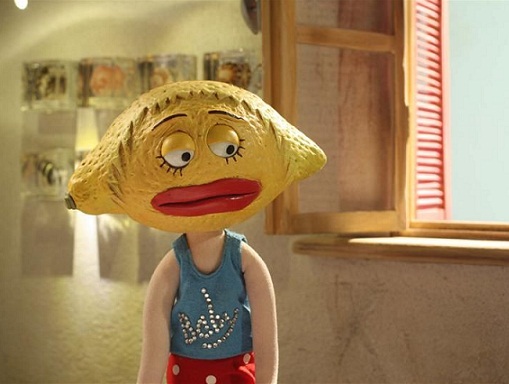 Named to be the “fruitier version of Romeo and Juliet” (YellowAffair), the world’s first 3D animated opera sets out a group of immigrants looking like oranges to flee from Africa to the promised land of Europe. Only one of the passengers survives the terrible storm that hits and the heroic orange-boy Maroc ends up working illegally in a tomato farm. When he meets Lisa, part girl, part lemon, daughter of the rich businessman exploiting the immigrants, a love story is born. It is an adventure tale for children, who will sure have a laugh when they watch the detailed puppets singing, a film about immigration for teenagers and an animation masterpiece for adults with a yearning for skilful arts and craft.

It took altogether seven years to complete the film, five of which for three artists to animate the puppets and another two for over a hundred people to create CGI. Fluids are the hardest to generate. Like a natural liquid changes position, on the computer screen water and the likes are brought to movement the same way as in real life: through unison of single particles! Producing CGI liquids is therefore time-consuming and quite a handful for even the most accomplished artists. The director Mait Laas is used to working alone or with few partners and initially wished to imitate the stormy sea and foamy water on the beach with handmade materials, but nothing seemed to work well enough. A scene where a puppet is underwater and almost drowning would have been impossible to make and modern technology came in handy even to the director’s surprise. The result of the filmmakers’ hard work is truly inspiring, a perfect visual ensemble of Styrofoam puppetry in a scenery of computer codes.

On the other hand, it seems that along the long years of filmmaking the defining lines of the narrative were lost site of. The story behind the decorative array is hectic and the figures, which die in the first act reappear in the next, just like in a real opera. At the festival screening’s Q&A the director pointed this out himself and if the unpinned directing was indeed his intention, he succeeded. I am not personally sure if success smells the same way for him and me, but the film as a whole is nevertheless truly awing entertainment. The sets are designed with superb artistic value, although those looking for serious food for thought will be left hungry after this one.