If you’ve never seen the movie version of Mary Poppins before, stop reading this now, go out and get it and come back to me when you’ve seen it. Don’t worry, I’ll still be here. 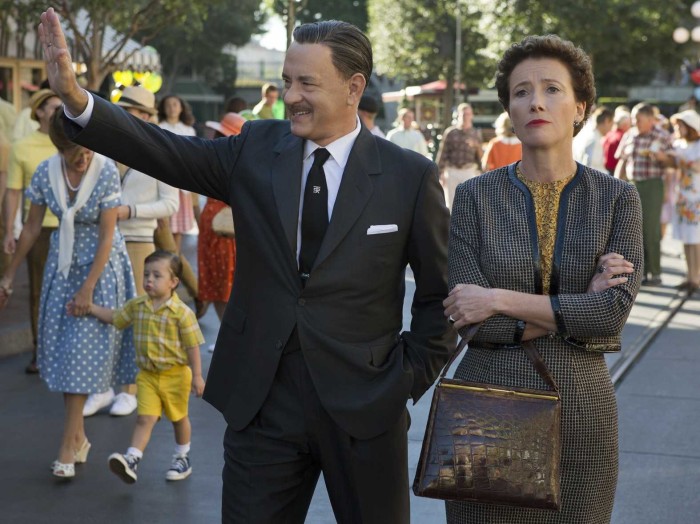 Ahh, you’re back. Good, wasn’t it? Especially the bits when they dance in the painting or clean the room by magic. Just a word of caution: Dick Van Dyke’s accent is a bit weird and no English people really speak like that.

Now, wouldn’t you like to know the real story of how the Disney movie made it to the big screen? Well, if you do, you’re in luck. Saving Mr. Banks purports to tell the true account of how P.L. Travers (the author of the original Mary Poppins book on which the film was based) finally gave Walt Disney the go ahead to put her English nanny on the big screen. But is it more of a fairy tale than the other so beloved movies of the studio affectionately known as the House of Mouse?

In 1960s England, P.L. Travers (Emma Thompson) is persuaded by her agent to travel to America to negotiate directly with Walt Disney (Tom Hanks) for the film rights to Mary Poppins. Travers has turned him down in the past but – with no new book on the horizon and money tight – turning Poppins over to Disney might give her the much needed money. Yet as soon as she arrives in the USA, she detests everything about it – from the garish colours to the overenthusiasm of its inhabitants. Even worse, the film script and songwriters seem intent on turning her novel into a silly musical with animation. As Disney himself tries to persuade her to his way of thinking, it’s clear that Poppins is more than a mere character to her. As we discover through flashbacks to Travers’ tumultuous upbringing in the Australian Outback with her alcoholic father (Colin Farrell), Poppins is a very intrinsic part of her life.

One of the joys of the original Mary Poppins film is the sheer unpretentiousness of it all. There’s silliness, joie de vivre, a smattering of darkness and a veneer of sentimental. But we now live in more cynical times and it’s difficult to watch it without thinking that the majority of the film is as fictional as a flying nanny. While the fact that a Hollywood movie based on reality is mostly fictionalised should come as a surprise to no one, some of the conceits on offer here (such as Travers’ icy relationship with Disney which soon thaws) start to leave a bad taste in the mouth. It’s not helped by the fact that – since the film’s release – certain scenes (especially Travers’ attendance at the premiere of Poppins) have subsequently been claimed to completely misrepresent what happened in real life. When you factor in the fact that the film is a Walt Disney production, then there’s more than a slight whiff in the air of this being not much more than Disney propaganda in which Walt is shown to be a great guy whose niceness manages to get the better of a stiff Brit.

Yet – as with many Disney movies – there’s enough on offer here to allow all but the most cynical something to enjoy. The two central performances are great as Thompson manages to be both brittle yet sympathetic, while Hanks – perhaps the modern embodiment of the ‘all-American’ actor – is clever casting. Hanks is solid and adds just enough grit to his portrayal to avoid presenting Disney as a total saint. And – whether they are true or not – there are a number of nice scenes including the ‘birth’ of the song “Let’s Go Fly A Kite” and a nicely judged joke at made up words such as Supercalifragilisticexpialidocious (a word that I have just typed for the very first – and probably only – time in my career which means I can probably retire now). Director John Lee Hancock makes a nice job of contrasting the slightly artificial gloss of 1960s America with the harsh reality of 1900s Australia. The film just about manages to survive the lack of dramatic tension. Many films about a real event have this same problem: will Travers sign over the rights of Mary Poppins or will the film – which millions of people have seen and is iconic the world over – never be made? Hmm, I wonder.

Saving Mr Banks has extremely entertaining moments and wonderful performances. But just like you don’t really believe a princess is co-habiting with seven men of a limited stature or that an elephant with big ears can actually fly, you’ll have to take so many pinches of salt with this movie that you might need a spoonful of sugar to help it all go down.