Some Cold, Some Warm and Some Out of the Box Painters from Latvia 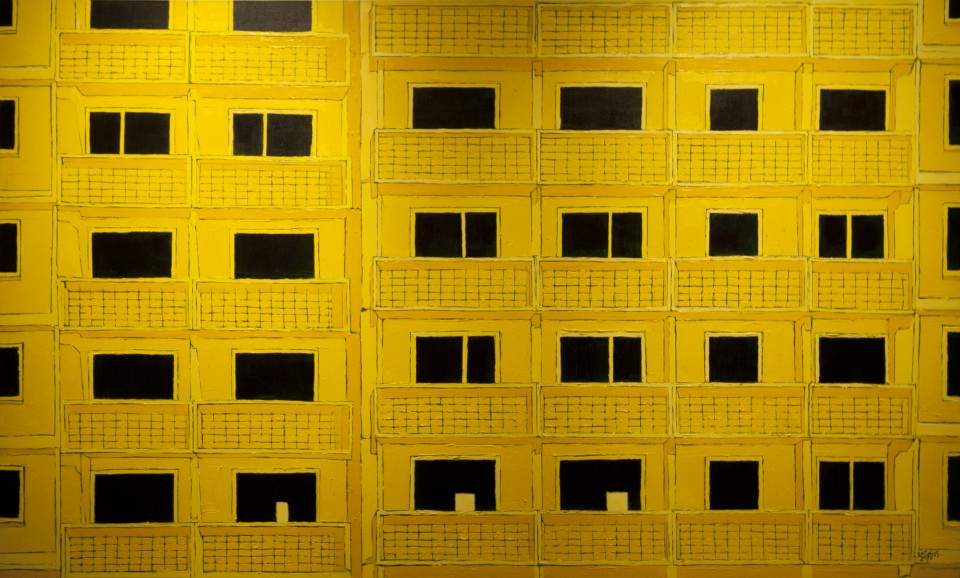 Compromise and the individual or non-influential vision of one man

New, fresh and painting – these three keywords for the exhibition curated by Peeter Talvistu are provocative and controversial enough to cause immediate reaction. Well, at least reactions in Latvia and in the vicinity. Are the names Kristaps Ģelzis or Andris Vītoliņš something new for Estonia? We can turn the question around and ask if Jaan Toomik and August Künnapu are something new for Latvia? If we think about the original meaning of the term “new” then the only artist who could fit this box is Paula Zariņa. Also we can ask if all artists are fresh or just fresh for Estonia. Fresh can be considered to be something that is either new or that can stay new for a long period. So in this case again I must mention Zariņa’s name and Kristaps Ģelzis who are actually the oldest in the category of age. The last but equally important question is if all the artists really are associated with the arena of Latvian contemporary painting? These and more questions arise because of the playfulness of the title borrowed from the world of advertising.

All in all, the Latvian painting scene in the exhibition is presented by Kaspars Brambergs, Ritums Ivanovs, Andris Vītoliņš, Vineta Kaulača, Inga Meldere, the constantly fresh Kristaps Ģelzis and the youngest member, the fresh news Paula Zariņa. The daring goal of the exhibition is to introduce Estonian people to the neighboring art world which is so close and so far at the same time. For someone like me who works in the field of Latvian contemporary art, the first reaction definitely is incomprehension why so many good and interesting painters and angles of Latvian art are left out. Well, painter Ritums Ivanovs called this exhibition a compromise and the individual or non-influential vision of one man. I guess you can’t have it all, so fair enough.

The cold and the warm ones

Of course, to talk about one specific tradition of contemporary Latvian painting is difficult. A few years ago Latvian art critic Vilnis Vējš tried to define the new painting scene calling it the “new simplicity”. This term can be used if we understand by that the avoidance of a very narrative art language. Artists choose to give hints and inkling of something with the help of a few objects and their fragments or painterly brushstroke hieroglyphs. Figurative forms mixed with painterly expression can be defined as one of the most important local traditions, but painting has never gained a strong tradition in the field of abstract expressionism. We can speak of the Latvian abstractionism tradition as the art that lacks the energy in external form, instead offering metaphysical color fields and techniques similar to watercolor.

The concept of the exhibition lets us divide painters in to three groups to talk about different usages of local traditions. First, “the cold ones” who paint realistically, even photo realistically, depicting and analyzing the world that we see directly around us. Then there are “the warm ones” who present a more stylized and lyrical tradition. Dreams, memories and the subconscious are played out with painterly brushstrokes. Of course there are always “the out of the box ones” that have a personal style but do not represent one particular art medium or one local tradition. This is a quite formal method but it helps to bring some order to the representation.

One of the most skillful craftsmen and “coldest” members in the bunch is Ritums Ivanovs. He represents the images (usually human depictions) of mass culture in bluish tonality and line rhythm, stressing the praised icons in the “church of television”. Ivanovs’ works are one of those examples that show the high level of craftsmanship in schools of Latvia. He has found his special technique and mastered it to perfection. On the other hand his constant reproduction of himself for many years has really bored the viewer and turned him into the “Salon” master. In the context of mass culture icons another Latvian painter can be mentioned. Frančeska Kirke is a painter who blurs mass culture icons with the icons of art history. Still her works have more feeling of nostalgia compared to the flatter images of Ivanovs. 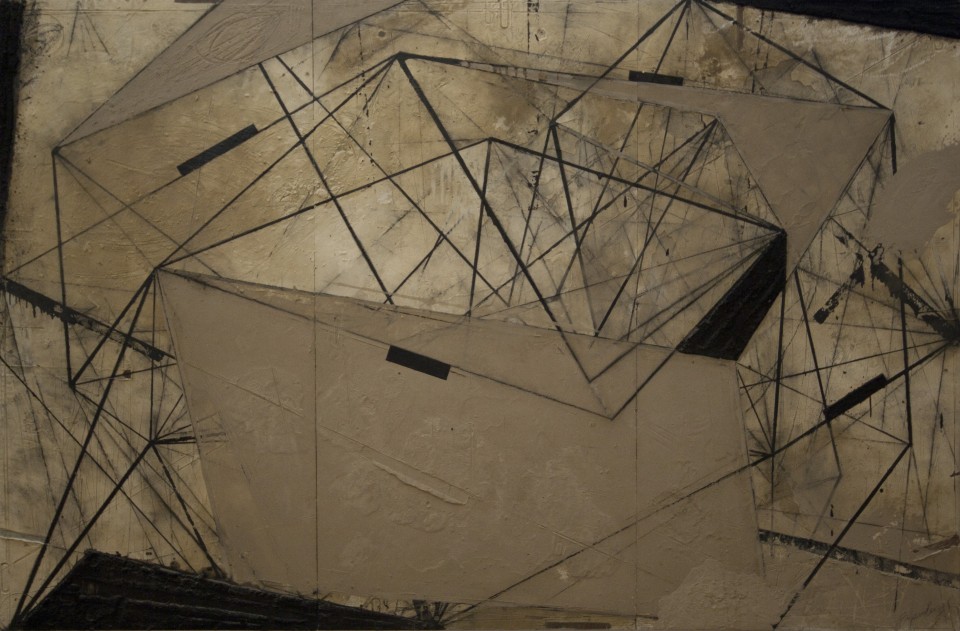 Ritums Ivanovs is exhibited in one room with Kaspars Brambergs whose paintings are like monuments made from sculptural, materialistic blocks in comparison with Ivanovs’ more delicate and graphic works. So at first I thought that putting them both together was “game over” for the more feminine Ivanovs. I appreciate the clever eye of the curator because both artists somehow magically manage to work as two parallel worlds respecting each other. Sadly the same clever formula does not work in the case of Vineta Kaulača and Inga Meldere who are exhibited together in the Monumental gallery. Kaulača is another “cold one” represented in an exhibition that sadly devours the small and painterly paintings of Inga Meldere. Kaulača’s images of frozen movement and landscape fragments are almost as monumental as Brambergs’. Her urban visions do not only represent the city scenery all around us but also the fixation of time and space that is unstoppable. Some of Kaulača’s water movement paintings can be compared with the water depicting graphics by the famous Latvian-American artist Vija Celmiņs.

In a separate room on the second floor one can find another urban landscape painter and newly elected head of the painting department at the Art Academy of Latvia. Andris Vītoliņš in opposite to the above mentioned searches the social context of urban space putting it into bright color blocks and lines or sometimes onto a round frame canvas calling them “the vitamins”. His interest is turned towards architecture and ruins for example, falling apart soviet houses, factories or newly-built houses that stay empty because of the economic crisis. In the end we get the feeling similar to the American painter Edward Hopper – lonesome works, only with brighter colors and without the presence of humans. Vītoliņš similarly to Ivanovs has also found his golden formula that puts him into a dangerous position mentioned before. Still he somehow finds new ways, mostly formal, to talk about the subject of his interest.

“Warm” painters as Inga Meldere and Paula Zariņa present a totally different angle. These artists don’t hide marks of the brush but on the contrary, sometimes even stress it out with thick, substantial lines. Artists who use this story telling style usually take images from their memories or dreams and try to visualize them. I must say that the strongest in this field is Ēriks Apaļais with his fragments of images floating in a thickly painted cosmos and Jānis Avotiņš whose paintings look like bleached dreams. This style in Latvia has become so popular that it has even created a mainstream.

Paula Zariņa is exhibited in a separate room opposite Vītoliņš creating another pair of opposites. Zariņa who is still making her way in Latvia, was first noticed as an upcoming new name in the Latvian art scene thanks to curator Diāna Barčevska who in 2010 organized the painting exhibition “The Urban Children” at the National Art Museum of Latvia. Her central figure is an abstract space with small human figures most often closed in a contour which she calls the “capsule”. Often she is compared with another Latvian painter Anda Lāce who is famous for her monochrome figural paintings with a technique close to watercolor. Still, from the form and manner of representation I would have suggested that Zariņa be together with another young talented artist from the opposite group – Magone Šarkovska. Her hyper-realistic and sometimes ornamental paintings create an illusion of “colorful abstractions”. 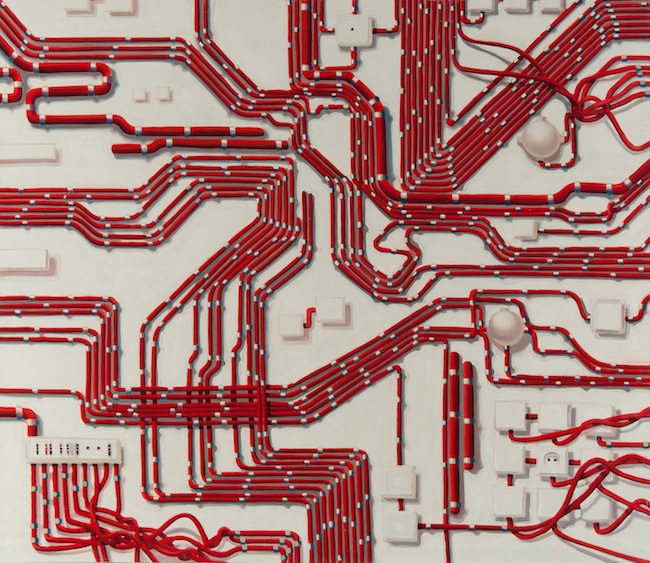 Let us return to the central hall of Tartu Art house to Kaspars Brambergs’ paintings. He is one of those artists who put some kind of national code in their works. Earth tone gradations and rough materials put on several layers of endless space make the works not only substantial but deep as well. When looking at Brambergs’ works, Andris Eglītis comes to my mind. Eglītis is a very famous painter in Latvia at this moment. He is using nature not only as an inspiration or image but also using natural materials as mud and wood. In the last Cēsu Art Festival 2012 he exhibited wooden sculptures and fallen trees with his paintings as a part of his installation. I would really love to see these artists put together as a duet really creating an important 21st century Latvian angle that is deeply connected with landscape traditions and philosophy.

Out of the box

In the Small gallery one can find the strongest artist in a bunch – Kristaps Ģelzis who has participated in the 54th Venice Biennale. With “Artificial Peace” he continues to present works in a fluorescent painting technique which he has been exploring since 2008 when the first such painting series “Bedtime story” could be seen at the Cēsis Art Festival. Ģelzis has a master degree in graphic arts and he is also working successfully in this field. In 2011 he got Latvia’s most prestigious art price “The Purvīša Price” (named after one of the greatest Latvian painters Vilhelms Purvītis) for his large format watercolors. He exaggerates the watercolor technique with paint that flows down the surface. The content of works on the other hand he connects with everyday life using social criticism, pop art and even kitsch elements. Then of course, installation art on which he specially focused in the 1990s. Altogether Ģelzis is the white sparrow in this company. One must be very careful before putting him in one particular group because he will jump out of it anyway. Yes, his works also cross the field of painting, but he has definitely never been associated as a painter. Painting for Ģelzis is just another instrument but not the central object.

Kristaps Ģelzis is the only “out of the box” artist presented in this exhibition but there are more. For example there is Kristiāns Brekte who likes to use aggressive images of mass culture like monster hybrids, sex and violence in paintings, his collages and objects at the same time are using a painterly language. He could be put in the Latvian “Mutant” group – term that I borrowed from the Latvian curator Sniedze Kāle. In this group is also Kārlis Vītols and the baroquely nightmare painter Atis Jakobsons who can be compared with the Estonian artist Rauno Thomas Moss. And then there are the metaphysicians and color field artists like Barbara Gaile and Tatjana Krivenkova.

Even if I disagree with the choice of some artists and the way they are represented for the sake of the curator’s concept, all of them are good and highly professional. And this exhibition does create some kind of “landscape” of what is currently happening in the field of Latvian painting, a medium that still dominates despite very strong young graphic artists and of course artists that have gone through the school of Ojārs Pētersons (Head of the Visual Communication Department at the Art Academy of Latvia). It is very important to follow and see not only the processes that are happening in the big art arena but to follow the work of neighbors as well. Hopefully this exhibition will be only the first volume and it will turn into a beautiful tradition of Tartu. For those who are beginners in observing and getting to know the contemporary art scene of Latvia, hopefully this text will help as an addition and filter for the introductory exhibition of Latvian painting.