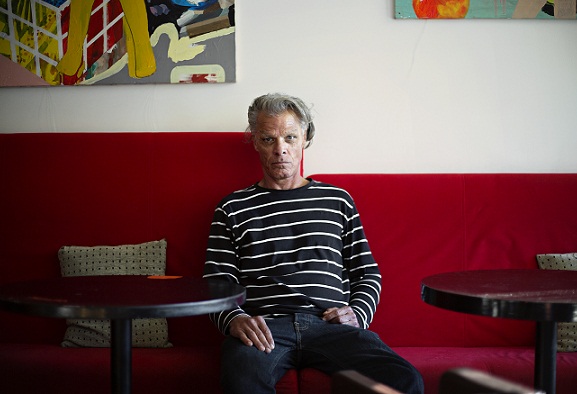 Steve manifests all the ages and stages he came through his life and often we encounter him surrounded by young people. In my view, he epitomises the figure of the late-modern flâneur… ‘passionate lover of crowds and incognitos’ in the words of Baudelaire. He is in this sense a creative survivor, capable to adapt to varied contexts, always on move, searching for a home en passant, able to connect and disconnect, perfectly unadapted to a given society (“Sometimes I feel like I’m doing a service to Estonia”).

“Look at Mick Jagger. We just follow our passions. The sentiments change through the age, but many ideas and feelings are very much the same. Still I want to change the world and I try to be pleased everyday. When I’m being curator, or performing on the stage, I feel alive… Perhaps, with the time I learnt to be more patient. Nowadays, we live in a global now. Youth moves especially fast. They also have less patience than us. They rush to get it, what makes me feel uneasy. Perhaps this new people, with their new myths, will create their own stuff. But we don’t have to reinvent the wheel”.

He notices that with the years his friends tend to become ‘domesticated’, having children, earning a family, moving to the suburbs… “This occurs in cyclical terms, every ten years the crowd changes. There is also talent in the new generation, but it is very much on adrenaline, on video games… ta-ta-ta, chush, chush… So when I sit to watch a movie, as I have been doing since the seventies, I wonder if they might get it in the same way. At the same time, with this new energy, this generation might come up with something new… hopefully… yeah, it’s a great time to be alive. This is the time and this is the struggle that we all share, trying to make some sense out of it”.

He got Swiss-Italian and Spanish roots (Vanoni and Boronda family names). In his twenties, he struggled to integrate his roots and construct his identity (“Anyways, we Americans are a big mix”). Steve was born in Monterey, California. “It is where my grandfather had a fishing boat. My father was born there, I was born there also…. Then I moved around, because my father was a military for thirty-one years, in the navy”.

In 2008 he came to Estonia for the first time, invited by a group of local artists to tour and perform with them around Europe. In 2009 his atelier and gallery, located in Sacramento, caught on fire, so he decided to stay in Europe. “I lived in America my whole life, I got tired of it. Also I had some concerns with the government, the worse government in the world. In a way, here it’s a bit more civilized. I was living in a town full of bars, and without a connection to the little art scene since I had lost my art community. Here, in Tallinn, I don’t see that many police and you can be in Berlin or Paris in two hours. Also Tallinn is cheaper than Helsinki… and I like this town, it’s comfortable and experiencing a sort of re-birth.”

As for the original flâneur, women play an important role in the way he spends his days. Sometimes alone, sometimes accompanied… they all look very different, from diverse generations and deploying varied degrees of confusion (or self-confidence?): “One has to try to keep the ladies happy… I had a couple of Estonian girlfriends, but didn’t last for long”.

Steve teaches in the Estonian Academy of Arts from time to time. Also does performances (ie. Mart Avi) and DJ sets (ie. Tops). In his view, he’s still an outsider in the Estonian art scene… “and I understand it. They are enjoying their renaissance and I’m just an outsider. So here I just aspire at doing my work. I just want to do my work, play music, make my art and live”.

He lights a new cigarette and adds: “the burning of the studio was a tragic lost for me. Then I moved around for six months, searching for a place, but I didn’t find it. Probably, I wouldn’t be here otherwise”.

I wonder how does it feel for you, coming from a big society, to live in such a small one as the Estonian?

“Here there are not that many social strata like in the States. Everything is smaller, what, in a way, it’s comfortable. Tallinn is still not one of the stops of the art sphere, but it’s developing a lot though; some people even say that it’s going to be the next Amsterdam. Artists here are very aware of what is going on in the world. They are very connected, but keeping their own sensitivity. And in the States, for instance, these local small flavours are very much appreciated”.

Some people make fun of him, mimicking his ‘hey hey hey’ and ‘my buddy has a good buddy there’ (which is commonly understood by locals as ‘my body has a good body there’). “Some people refuse to talk with me because of not speaking Estonian. They think that I’m lazy, but I don’t have 300 euros to attend language lessons… then I go back to America and people say, ‘oh, you sound like Euro-trash’… but the main thing is that we can communicate, however you can”.

Do you feel understood here?

“I haven’t been in the States for three years. I miss some of my people. Mother, sisters, nephews… Culturally America gives you a lot, but there is also a lot of garbage. Then Tallinn is a bit insular, and close, for an outsider like me. I’m still on the outside… I don’t know if people really understand me here. Young people are a bit more open-minded, but I feel like a stranger in a strange land. I think that it is not always about me, personally… I have met here amazing people, but I’m not quite allowed to enter the local artistic circle”.

He has been teaching art in colleges, prisons and hospitals, working for eighteen years with developmentally disabled adults, who suffer Down syndrome, multiple sclerosis… “I was a sort of ‘art cheerleader’, encouraging people to make it better”.

For how long do you intend to stay here?

“I would like to stay in Estonia as long as possible. Still I face many difficulties; there are not many opportunities to teach or to perform. Nonetheless, the chances are better in the EU than in USA for getting funding as an artist. Also I like the Estonian sense of humour, black, dark, hard, unique, like fun in a horror film. I guess that it’s related to the history of the country”.

During the interview he drinks three Saku Originaal pints (local beer); people keep coming and going into the smoking room and most of them recognise Steve and say hello to him. “It is particularly interesting to me the way the place, the light, the sea, the Estonian sensibility, can be felt in the music and the art done here. I face many things that are new to me, that were unknown. This compels me to be more sensitive, to try to understand local terms and sensitivities; some stuff even shocked me. It is exotic here…”.

Steve earned a MA in arts in 1982 in the California State University of Sacramento and has published the collection of poetry Targed in the Head Poems (Aluminium Chicken Press, 1987). “For a while, I noticed in Europe a certain anti-American feeling; particularly when Bush was the president. But I hated Bush myself! I got a bit of paranoia with that”.

John Coltrane and Jack Kerouac are among his main referents. There in the States, Steve met some of the big figures of pop culture; after insisting (‘No, no, I don’t like name dropping’) he reported having met Brian Eno, Iggy Pop, Lee Renaldo, Andy Warhol… many of the people that he admires. Steve also tells how he encountered Viggo Mortensen in a party in 1981, “Then Viggo said, in an insecure way, that he wanted to be an actor and look now… It happened because I was in the States and these people were also there. They are not in Tallinn, but here I met other kind of interesting people”.

As we can see in his personal website, Steve has participated in dozens of exhibitions, performances, recordings, as well as being the founder of several galleries and museums. In some cases, he even says ‘founder and last surviving member…’

Steve, are you a fugitive?

“A bird knows no boundaries…”

But a bird always flies in a given sky…

“I have been living illegally for 25 or 30 years, doing what my life wanted me to do; and for me it has not always been a comfortable, given my trade, doing the artistic scrape. I have always had my own personal cold war”.