This spring the Estonian Academy of Arts Faculty of Architecture guest speaker series featured an Austrian designer Sonja Bäumel who lives and works in Vienna and Amsterdam. Her artefacts mediate between art and science, fashion and science, design and science, between clothes and body, between fiction and facts. She studied at the Fashion Institute of Vienna and in the University of Arts of Linz, as well as in the Design Academy Eindhoven. Her work has been exhibited internationally in Anthology Film Archives New York; Utrecht Manifest, Biennial for social design; Milano Salone del Mobile; Biennale Internationale du Design de Liège and in Museum of Natural History Vienna. Her Textured Self project is in the permanent collection of the TextielMuseum in Tilburg in the Netherlands. Her works have also been the basic impact for documentary films (ORF/ARTE: BioArt – Kunst aus dem Labor; ServusTV_ Terra Mater: Wir sind Planeten) to which she actively contributed. 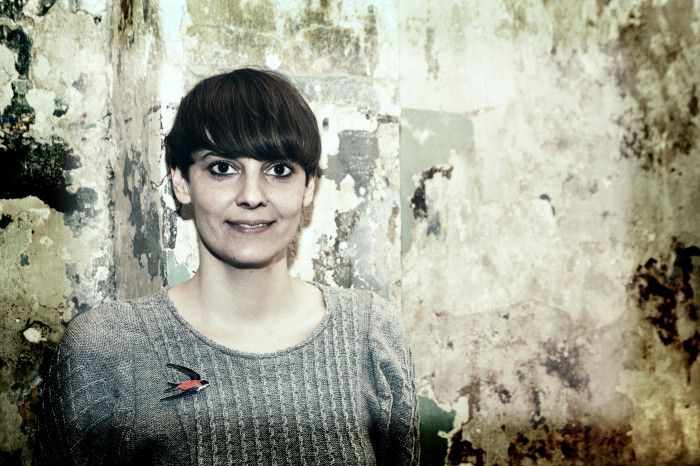 The Thresholds magazine (nr 42) has referred to you as “homo faber” – one who necessitates the process of production to define human against the things that are produced. Do you agree that you have used your own body in your works as a tool to understand better how you operate in the larger world?

That’s correct, I utilise, explore and experiment with my body in my work. I consider it as a tool to derive information from the physical/biological matter, to develop comprehension of who I am and particularly who we are, trying to understand better what my body is really composed of. I am interested in outlining a “bigger picture” and particularly in understanding in which way we, humans, are connected to our surroundings and enveloped in an unknown network, which could perhaps lead us to identify new forms of possible interaction between us and the environment. Furthermore, my interest lies in what influences scientific knowledge in regards to the way we historically perceived and interpreted the human body, aiming to improve such understanding today and to project it further into the future, to unravel ways in which the biological body affects our current society and the related cultural context.

As a designer, using bacteria and fungi to serve a second purpose – clothing – surrenders those to human imagination. How far can we take it? How to train our imagination as designers, architects?

In my “(In)visible” film (2008) I envisioned how a novel second skin layer that involves organisms – such as existing skin bacteria and slime mould – could mutate when adapting to different environments and contexts. Through such work and vision, I asked questions related to the way the interaction between humans and environment could change, triggered by the adaptive capacity of this new individual layer on our skin. I imagined what would happen if our second skin would be considered something different from the way it is nowadays; fashion is in fact what currently defines such a layer. However, the fashion system is strongly based and built upon the opinion and dictation of some specific minds, who decide through practices, like “trend forecasting” what is good and what is not. On the contrary, I strongly believe that such second skin could be much more meaningful and authentic, when based on one’s individual biological identity, environmental conditions and social needs. Cultural imagination dwelling on scientific facts is a very important skill to cultivate, aiming to involve different audiences (designers, architects, creatives, scientists, general public, etc.) in deeply reflecting, imagining, wondering and exploring the world we are all part of. Promoting the understanding of the fact that we are all somehow connected through an invisible biological network present on our skin, is an essential concept rooted in my work. I personally feel that there is a strong need of promoting and fostering imaginative practices: we need imagination to help us questioning existing facts and envision where our current knowledge – both in positive as well as in negative terms – could lead us in the future. 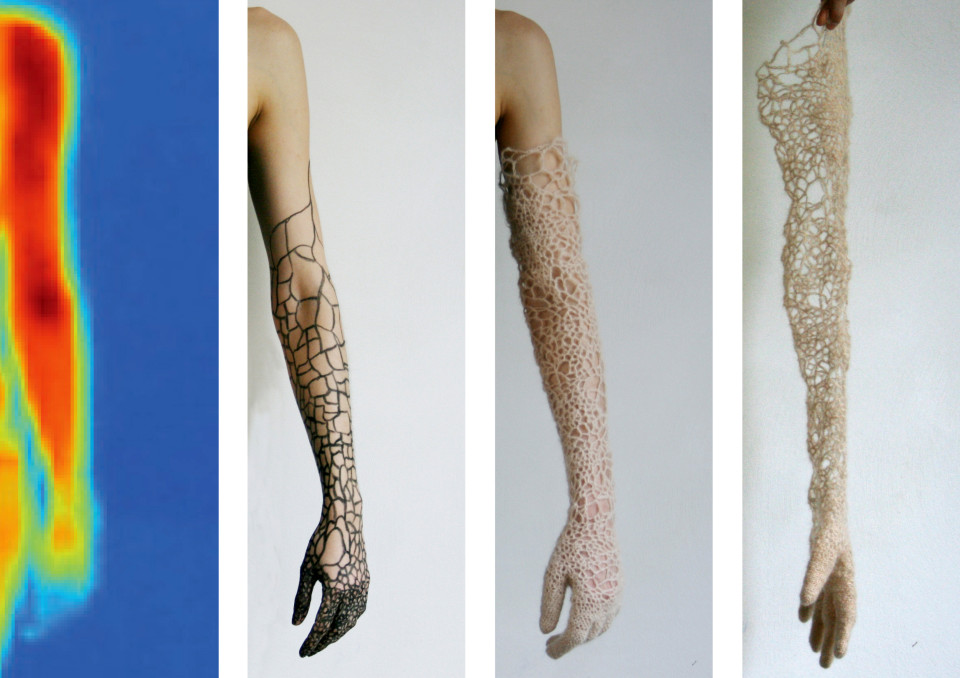 "crocheted membrane", 2008–09. Sonja Bäumel. This project is a visualisation of how we could use our unique bacteria population to create new clothes that would react to our individual body temperature. The texture would get less thick on areas where we need less warmth and would built up on cold body zones and create new body-related silhouettes.

Visualising the hidden interlinks between humans and the microworld, the role of the designer becomes that of catalysing symbiotic co-existence of the human body and the environment. How to advance “metabolism with nature”?

I believe that being capable of visualising the hidden interlinks between humans and microbes is the first fundamental step in order to create public awareness. Furthermore, it is essential to gain a deeper understanding of how such interaction functions, in order to learn how to utilise it in the best way. Trying to interpret the soundless language spoken by millions of barely perceivable entities living on our skin, is an essential step to allow us building a new living, adapting system on our body. This could strongly impact not only the way humans interact, but particularly the way societal systems and networks work. To be capable of fully integrating with natural life-systems, we first need to re-start considering and respecting microbes and tiny creatures as equal partners. Such behavioural change could allow us to start learning from them and their expertise, deriving from billions of years of existence. Micro-organisms adapted to radical changes in an incredibly successful way and accordingly they were capable of evolving in relation to the resulting novel needs. We could learn a lot from this.

In your “Metabodies” work you use the phenomena of quorum-sensing – low-threshold communication among bacteria that enables them, by means of chemical reactions, to regulate their “behaviour” accordingly. Are there some unknown territories to tap into, something that can be taken further? What can or should we learn from using such phenomena for our own, practical purposes?

I think it is essential to look at the soundless language spoken on our body, as there lays a tremendous potential for understanding interactions happening within the natural systems and the way we, humans, interact with such complex ecosystem. I am sure we could learn a lot from this silent conversations and specifically from microorganisms’ collective behaviour. Within the scientific community, the study of Bacteria Quorum Sensing, is mainly promoted with the objective of understanding how to control, manipulate or even destroy cells, by researching their molecular communication. I think there is much more potential behind this understanding, particularly when we would stop pretending to exclusively control them, by starting treating microbes respectfully, as equal partners. This is where one of my deepest fascinations lies: in defining possibilities of symbiotic interactions between different life-forms. 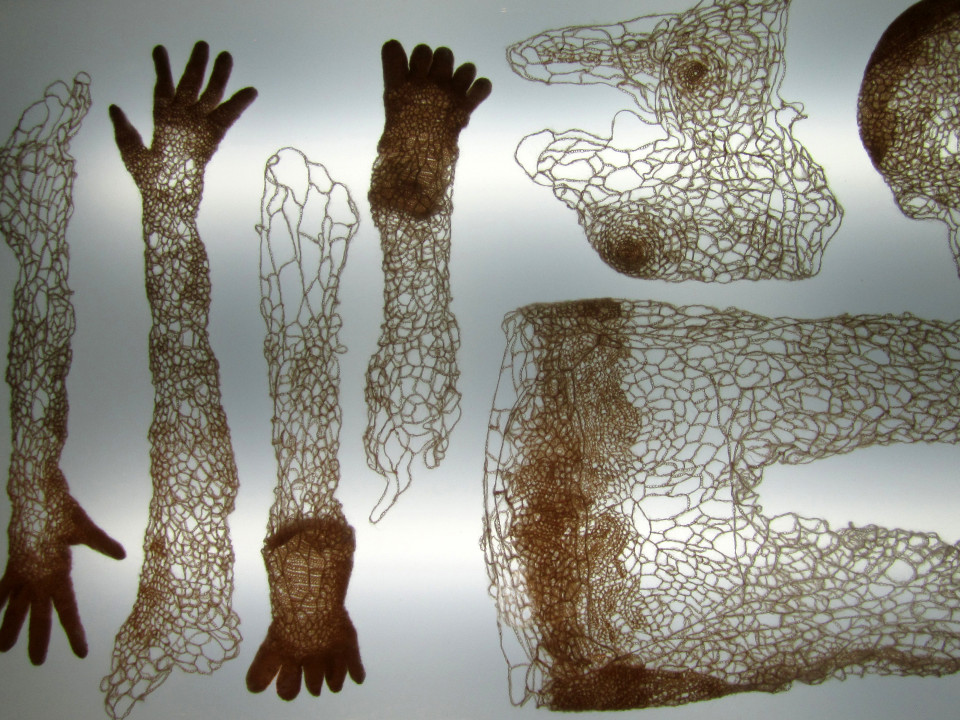 Who is a designer or an architect in today’s world – for you? Or tomorrow? How do you see your own role within the field?

Being actively involved in a creative practice as an artist, designer or architect requires constant evolving and adaption to the needs and changes of society. I see the “creative” as somebody capable of thinking within a precise context and collaborating in interdisciplinary ways, to create novel unprecedented outcomes, and for whom the process of making is kept in balance with the generated theoretical knowledge. I think society should start valuing the essential role that creativity plays on all levels. It is a fundamental act: to avoid exclusively focusing on theoretical knowledge, by also recognising the importance residing in the knowledge we gain through the use of our hands.

As for myself, I do not like neither need to specifically “define” myself as an artist, a designer, a fashion designer, etc. I am simply passionate for what I am doing and researching, within my creative practice. My projects’ outcomes are often interpreted in a different way by the audiences, bringing them to define me as an artist and/or a designer. If the start of the research process was bound by a defined field or category I should belong to (design, art, science, etc), it would not allow me to freely explore the subjects I treat, therefore forbidding me to allow (unexpected) results to occur. Clearly, it is totally fine that people categorise the projects, once they’ve been realised. However, I think we should generally start the creative process by following our individual motivations and interests, as there is where the big potential can be found.

What is “fabric” for you?

Fabric is a fascinating matter for me, as it links many individual, small elements together. These connections can result in completely different outcomes, characterised by completely new properties: it’s a kind of magical transformation. The fabric I imagine and actively research is not a defined and stable one, but consists of a network of life, morphing and growing, while flexibly adapting.

What is “behaviour” for you?

…an interaction which is beneficial for all parties involved.

Where can we see your work in the near future?

At this moment, my projects are shown at Ars Electronica festival “Project Genesis” exhibition in Linz, Austria; in Gallery Alma in Riga, Latvia and at MoCA Museum of Contemporary Art in Taipei, Taiwan. Hopefully my work and tangible visions will keep travelling and reaching further audiences, promoting a novel, different way to look at us, humans – at who we are and at our role and relations, within the ecosystem we are part of.