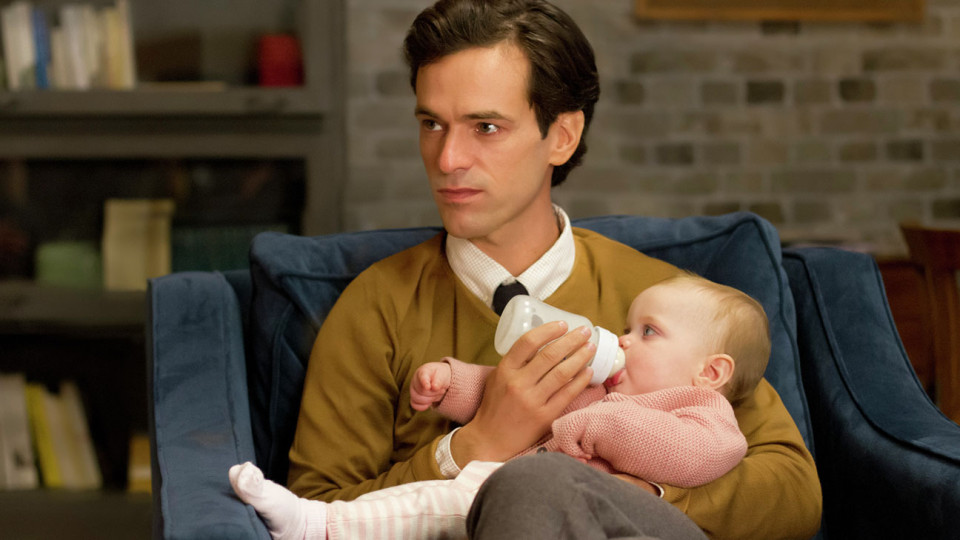 Arriving at a period where sexuality is at the forefront of public discussion in France, François Ozon had the potential to deliver a timely address on a subject much in need of mature screen representation. With The New Girlfriend, a gender bending screwball comedy, the prolific French director with an eye for provocation miscues, trivialising the issue entirely.

Opening boldly, Ozon gradually pans out from a series of obscured facial close-ups to reveal Laura (Isild Le Besco) in full profile. Clad in a wedding dress, resting serenely in a casket, she is a sleeping beauty who will not be awoken. Absent from the rest of the film in person, her spirit remains a presence as those close to her engage in a new chapter in their lives.

Switching jarringly in tone, Ozon moves to show Laura’s best friend Claire (Anaïs Demoustier) meeting with the former’s husband David (Romain Duris) to address the bereavement. A sombre circumstance twists outrageously when Claire walks into David’s home to find him in full wig and makeup, proudly modelling his wife’s best dress. From here on, Ozon takes material that could have made an compelling psychodrama and pushes it ever further into absurdity, frustrating matters further with each increasingly ridiculous development.

In an act of bizarre reanimation, David keeps the memory of his deceased wife alive by assuming her gender, embracing his desire to cross-dress as warped bereavement therapy. Impersonating her image begins as “something to remember her by”, but quickly becomes more than a ritualistic pleasure. David becomes Virginia and a new relationship is born in the sexually confused sisterhood of Claire and Virginia.

This is precisely the kind of complex, politically-charged material that demands serious treatment. Yet in Ozon’s film, this befuddlement leads to a series of romps involving lower back waxing, forgotten lipstick, misunderstood fumblings and a particularly nauseous shopping trip scene set to Katy Perry’s “Hot N Cold”.

Before long, David has gone full drag (chicken fillets, crotch tuck and garter belt) and seems to have finally found some kind of inner peace. He announces that if “girls are born in flowers, and boys in cabbages” he “was born in a cauliflower”. Ozon is responsible enough to avoid noting that David’s desire to cross-dress comes entirely from bereavement, suggesting instead that trauma can surface long repressed urges and reveal new ones as well.

In an admittedly unforgiving role, Romain Duris is unconvincing in either gender position, exaggeratedly queenish as Virginia and forgettable as David. Anaïs Demoustier fares little better, but it is most likely Ozon’s screenplay that is to blame. Every plot point that could be predicted occurs, and every twist Ozon seems to have committed to is a stretch too far, he wimps out with a fake-out dream sequence.

A film that deals with gender identity issues is welcome, but it´s hard to believe The New Girlfriend is the film Ozon envisioned. In a film of contradictory, abrasive tones, Ozon expects his audience to empathise with our displaced protagonist, whilst simultaneously inviting the viewer to laugh cruelly at his/her suffering. We are not always born into the bodies we want to be in and to an extent the film does well to recognise this but perhaps comedy, at least as broad as this, is not the vehicle in which to explore this line of thought. Or perhaps it should just be left to Almodóvar?