Peter Murray gave a lecture this spring at the Estonian Academy of Arts Faculty of Architecture guest speaker series, focusing on issues of urban planning in London in particular. He is the founder and Chairman of Wordsearch Communications, the leading international consultancy specialising in architecture and real estate. Peter trained as an architect at Bristol University and the Architectural Association and has worked as a technical editor of Architectural Design (AD), editor of Building Design and editor of RIBA Journal. In 1983 he founded Blueprint Magazine with the aim of communicating architecture to a wider audience. In the 80s and 90s Wordsearch revolutionised the way that real estate was marketed in the UK and now operates around the world on projects such as Taipei 101, ICC Hong Kong, Masdar City Abu Dhabi, Aerospace City Qatar, Hudson Yards and World Trade Center New York. Peter also founded the London Festival of Architecture in 2004 and the New London Architecture centre in 2005. 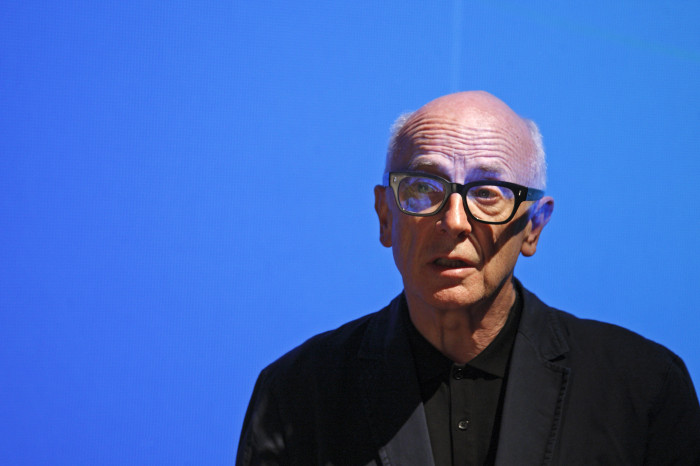 Should architects become politicians? If so, then how should they enter the politics?

I certainly think that architects ought to get involved in the political debate – not necessarily party politics but definitely in politics of environmental change. If you look at Britain, for instance, Richard Rogers and Norman Foster are perhaps the two leading architects and Richard Rogers gets involved in politics while Norman Foster doesn’t have any involvement in politics at all. They have similar influence in terms of how their architecture is perceived, their impact on the quality of global architecture. Yet in terms of their impact on London, Richard Rogers has had a very positive impact – something which I would really commend in regards to architects improving environment – which is very different from practice. It is about how one assists change to happen. Richard Rogers initially wrote a book called Compact City which got re-interpreted as a report by the British government for the urban task force (UTF – V.V.). The ideas which were included in it form a key part of many of the local planning documentation in British cities, particularly the London Plan, which is focused around the idea that denser cities are more sustainable. That really only happened because of Richard Rogers’ involvement with the Labour Party in the UK, but also a more general involvement in the political debate. Therefore I think that more architects should be involved in the environmental debate – it doesn’t need to be party politics but they need to have a voice about issues to do with quality of cities, sustainability, placemaking.

How to gain that voice? How to voice one’s opinions? In Estonia, we have in the architects union that has been throughout its existence a strong voice in the media, advocating the state architect’s office etc – the question is also how to sustain that voice over a longer period of time, to contribute to long-term strategic thinking?

Architects in the UK often get involved by actively making propositions for specific areas and ideas. They would take specific projects – for instance, Terry Farrell, one of our senior architects has been very active in developing proposals for specific parts of London, carrying out studies on pro bono basis. He carries out the work and publishes it, then uses that as a vehicle for showing how improvements can be delivered. Sometimes it also leads to a job to carry out projects. Such approach provides publicity for projects taken up by clients, politicians and even developers. To create a voice in the debate, architects have to see that they have a role which is beyond their professional role in terms of taking on the promotion of ideas, of change which often means doing it on a pro bono basis. You take a project, carry it through and then people can see what the benefits are and follow it up.

This is quite a tough way forward – there’s always a risk that nothing might come out of the initiative. The pro-active approach drives on enthusiasm, even idealism. There has to be a niche in the general culture that allows such idealism to emerge. Is it that the training of the next generation of architects – the architecture schools – need to inject this idealism into young upcoming professionals?

Architects are not motivated solely by the financial return from their practice, otherwise they wouldn’t take part in competitions, for example. The way that society gets architects to do so much work for free is that actually it depends on their idealism to create that work. It’s not only about getting jobs or commissions but because people are committed to do which they see as rewarding for the society as well as for themselves – beneficial in terms of developing their own individual practice.

Do you think that today’s architecture students tend to have more apathy towards what’s going on around them in political terms? What kind of training is needed to inspire the upcoming generation to model the world for the better?

This also depends on the political environment in which the young professionals find themselves in. The younger members of the architectural community have been fairly docile politically for 20 years or so. I was a young architect in the 1960s, and architect and journalist in the 1970s – there was far less work then compared to recent recession, there was just no work – when architects were very active politically, for instance in terms of housing problems, similar sorts of problems that we have at the moment in London: high levels of over occupation, quite a lot of homelessness, shortage of housing and inability to deliver enough housing. In the 1960s and 70s architects were involved in squatting, political action… Nowadays architects talk about it a lot but all the work they do goes through the system – they’re doing a job – whereas there was a whole series of new avenues that the architects in the 1960s and 70s followed, trying to solve the housing problem. They got involved in actively delivering new housing, in self-built housing, in new forms of housing… Today’s debate is about how do you improve things within the status quo, utilising the tools that are provided by the public authorities, not by looking at radical new ideas. Over my career architects have become generally less politically active which is why it is interesting to look at Richard Rogers who was brought up as part of the generation from the 1960s.

In other words, you are advocating for “architects as initiators” who have the capacity to script into the societal change. To do this, what are the tools or devices at our hands today?

Media is one of the most powerful ways, to change things not only within the profession but also outside the profession. A lot of the work that I’ve done over the years has been about involving a wider audience in understanding of architecture – its quality – and the benefits of design. Looking back at, for instance, Blueprint Magazine’s impact on the perception of design in the UK, then it has also influenced decision making by politicians, local authorities or the attitude that the general public has towards architecture. We need the public support to implement improvements and to reduce the antagonism towards change.

How important is it that people physically experience the alternative solutions, not only read or think about them? Festivals seem to be a great platform to bring new architecture closer to the public?

When I started out, it was a very small and local initiative that then got titled “London Festival of Architecture”. It was about the simple things that you can do, to make people notice things that they normally aren’t aware of. The first night we took over a street and put grass over it. At four o’clock in the morning people came out of the night clubs and lied in the grass like it was a park… and this was a street which would normally have lorries and cars on it. This was about the potential transformation of spaces. In London we’ve been car-dominated for such a long time, but small interventions like that can have a massive impact for people to start thinking. Physical manifestations like that can have a ripple effect.

In some cases, also very specific effects, especially doing it on temporary basis when people realise that it is actually quite nice. I’m quite interested in what they’ve done in New York with temporary alterations of public space and cycle routes. Janette Sadik-Khan (Commissioner of the New York City Department of Transportation from 2007-2013 – V.V.) did most of the transformations – as a commissioner of transport she was able to control the roads. Very few administrators have that sort of power – she was able to close off Times Square overnight, turn it into a pedestrian area. Suddenly people saw that it worked. It’s very hard to turn it back once people have seen it. So you need to show them what the benefits are. That’s what architects ought to do – conceive a better world and then convince people that this is the world they want to live in. 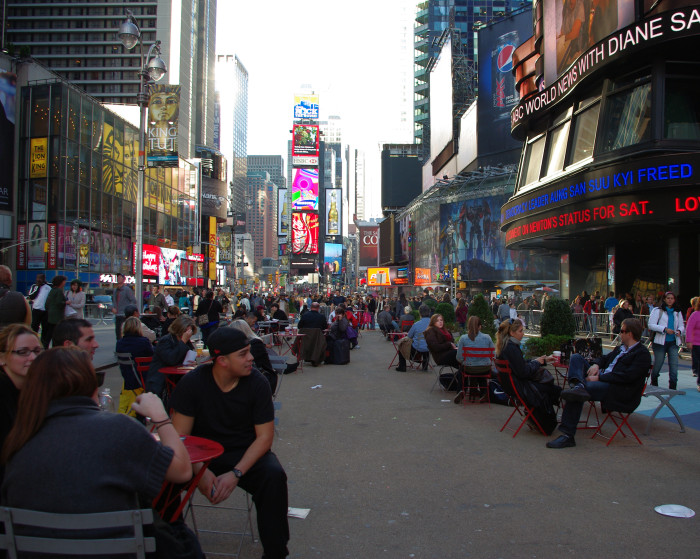 Times Square – closed off overnight and turned into a pedestrian area in 2009. Photo: Veronika Valk

In Estonia we have quite a few community-based initiatives like the one you described. But we have limited resources – especially in terms of demographics and the decreasing population.

Yet how lucky you are to have so much space. In London we have just the opposite situation with growing population, a very crowded city, escalating property prices – almost every piece of nice old warehouse is now being turned into expensive lofts, art galleries – there’re fewer and fewer places where artists or young people can find space to do things.

Well, send them over.

Indeed, you need to let them know. In London you often hear of people going to Berlin where space is much cheaper. Or to Detroit where there’s lots of space for artists.

This interview was first published in an abbreviated Estonian version in Sirp on August 1, 2014.